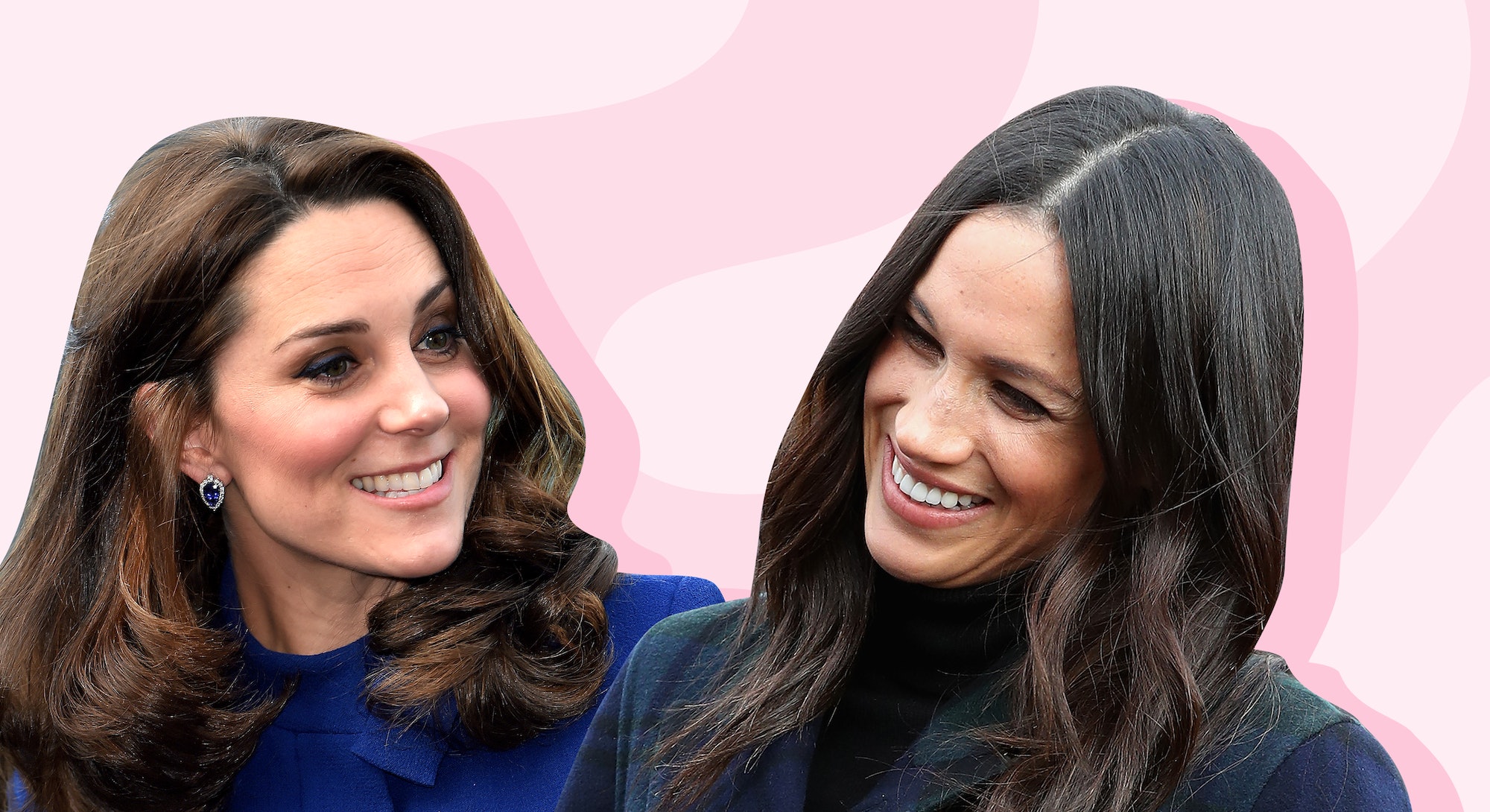 Imagine you just got engaged to a guy who promptly brings you to, say, his large family Thanksgiving. At this dinner is your future sister-in-law, the only other woman your age in the family and heretofore the darling of all social gatherings. You're just trying to get out of this familial minefield alive, and without accidentally setting the tablescape on fire, but everyone else is busy loudly comparing and contrasting you two at top volume as if you aren't sitting right there:

"Look at how the new one chews. Not with nearly as much dignity," they tsk. "And she wiped too vigorously with her whole napkin." You also don't smile enough, yet don't seem sufficiently serious; you understand better the evils of the Dallas Cowboys, but you offered three fewer compliments on the Jell-O salad. Think of it like having Johnny Weir and Tara Lipinski deliver a three-hour running commentary of every micro-move you make, but without any compliments on your outfit. It would be hard to resist telling everyone to shove their critiques down their judgy pieholes.

How often does it really happen that you’re BFFs with a relative-by-marriage or rapid soulmates with a new colleague? Because to Kate, Meghan is essentially now both.

Now imagine how Meghan Markle and Kate Middleton feel: two women who fell in love with brothers, barely know each other, and yet — because they’re suddenly part of the same internationally famous family — are widely expected to emerge at any moment wearing matching halves of a Best Friends necklace. They’d probably each trade 10 of your Thanksgiving stress headaches for a little space to work on this new sister-in-law relationship at their own speed. Here’s a radical thought: Why not just... give it to them? What if we don’t demand that Kate and Meghan be either BFFs or mortal enemies?

Not that we’re uninterested in the details. Unless you just crawled out of a nice quiet cave, you know Harry often played the adorable, lonely-seeming third wheel to William and Kate (Duchess of Cambridge, Lady Shinylocks, Captain Coat Dress, Mother of Dynastic Dragons). His romance with Meghan took the world by surprise toward the end of 2016, after which it was meted out in delicious dribs and drabs until their engagement this past November. Human beings are nosy. Of course we want to know everything about Meghan, including how she feels about Kate, the reigning superstar with whom Harry has shared so many public giggles. Google “Meghan Markle Kate Middleton,” and you get scads of breathless, scantily sourced stories about the state of their sisterly union, including a People cover called “Inside Their New Friendship,” and InStyle’s ”What Kate Middleton and Meghan Markle Really Think of Each Other Behind Closed Doors.” Hello alleges that they’re becoming “the closest sisters in law” already, and GossipCop is already on the defensive, insisting that their friendship is — caps theirs — “NOT exaggerated.” Hear that, haters?!? Besties!

But do they have to be? How often does it really happen that you’re BFFs with a relative-by-marriage or rapid soulmates with a new colleague? Because to Kate, Meghan is essentially now both. (They don’t call it “The Firm” for nothing.) Kate was William’s choice, not Meghan’s, and Meghan was not Kate’s pick but Harry’s. It’s completely normal for them to take this slowly: Being friendly is one thing, but actual friendship needs much longer to brew, and it’s hard to achieve when you can’t even ditch the lads and go out together in public without creating a media event.

This situation has more layers than just catching each other’s eyes across a boardroom table during an asinine meeting that really should have been an email chain. Meghan has to slide into a giant, complicated family governed by centuries of arcane protocol and countless persnickety expectations, while having left her home country and her job and injected several time zones between herself and her family, to take a gig that’s both making history (she’s the first person of color to marry into the Windsors) and making her one of the most famous women in the world. Kate, no stranger to much of that experience herself, now has to navigate it from the other side — while raising two kids, gestating a third, navigating an increased royal workload in the wake of Prince Philip's retirement, and being watchdogged for whether she’s been communicating enough of a welcoming, mentoring aura. Honestly, for half the time Harry and Meghan have been engaged, Kate has probably been teetering on the edge of vomiting from lingering hyperemesis gravidarum. You try becoming bosom friends with your brother-in-law’s enthusiastic beloved while clutching a toilet bowl. Expecting these two women to be already madly in platonic love is irrational.

Not to mention that the harder we lean into the Best Buddies angle, the harder the pendulum will whack everyone in the ribs when it swings back. The Daily Mail already ran a deftly snarky account of “the day Kate showed Meghan how to curtsy,” which is really just a retelling of their Christmas Day walk to church that unfavorably compares the way each woman genuflected to the Queen: “[Meghan’s] curtsy to the monarch was, to be frank, more of a wobbly bob. ... Miss Markle went back to clutching her fiance’s arm as if her very existence depended on it.” Another columnist wondered if Kate can “cope with Meghan Mania,” as if trying to keep the tiny future king from destroying a priceless vase with a polo mallet isn’t stressful enough. (No one seems to have floated the theory that she might be a tad relieved to have the spotlight pointed elsewhere for once.)

Left unchecked, this can only snowball as expectations build: Why aren't we hearing about constant tea parties or covert girls' trips to Harrods, people might start to wonder? Do they resent each other’s popularity? Are they constantly eye-rolling each other over pre-dinner gin-and-tonics? Throwing said G&Ts in each other’s faces? Warring over the corgis' affection and cheating with pocketfuls of bacon? Does Kate have 30 online aliases that she uses to post hateful comments about Meghan’s suits, and Suits? Is this a family in shambles?

The reality is, most people — male or female — do not form profound and intimate friendships in an instant, and crucially, absolutely no one expects this from men.

The issue, of course, is that there’s no story to sell if the truth is, “They have a totally cordial and neutral relationship.” But that might also be the only responsible story to sell at this point. There is a weird sexist pressure applied to women who are in the public eye, and only to women. You’ve heard of the virgin/whore dichotomy, but there’s an equally insidious angel/bitch version in play: Women are meant to have only the purest, most supportive impulses, to be all grace and maternal warmth, and never to make a fuss or challenge the behavior of anyone around us. In essence, we are expected to be perfect in a way that men are not asked to be, and anything short of that flips the script into an episode of Real Housewives.

There aren’t stories about whether This Is Us stars Milo Ventimiglia, Justin Hartley, and Sterling K. Brown are experiencing any professional jealousies, but there are multiple barely masked (or in one case, unmasked) blind items alleging conflict between Mandy Moore and Chrissy Metz. The cast of Desperate Housewives was trolled for years about whether the women liked each other enough, the women of Gossip Girl were constantly pitted against each other in tabloids, and the stars of female-centric rom-coms often go to such absurd lengths to prove they’re bonded and non-competitive that we end up with interviews like one for the Kate Upton/Leslie Mann/Cameron Diaz flick The Other Woman where Upton actually feels the need to explain why she isn’t currently lying on top of Mann. Yet no one seems to care about Harry’s relationship to any of Meghan’s half-siblings, there have been zero stories about whether Prince William and Pippa’s new hubby, James Matthews, go necktie shopping together, and absolutely nobody — other than us — is publicly wondering if Prince William is annoyed that Kate and Pippa’s brother, also James, runs a novelty marshmallow company.

The reality is, most people — male or female — do not form profound and intimate friendships in an instant, and crucially, absolutely no one expects this from men. Demanding that two famous women become overnight ride-or-dies, despite having recently been virtual strangers to one another, and then flooding the internet with stories citing sources who are just pulling wild guesses out of their fascinators... well, that does no one any favors. Not Meghan, not Kate, not you, not your new co-worker, not your future sister-in-law. There’s enough pressure on women without us being expected to warmly clutch every other person in our orbit to our welcoming bosoms. So for now, maybe everyone’s judgy pieholes should remain firmly closed on the topic, and instead focus on what’s really important: Why does James Middleton have a novelty marshmallow company?