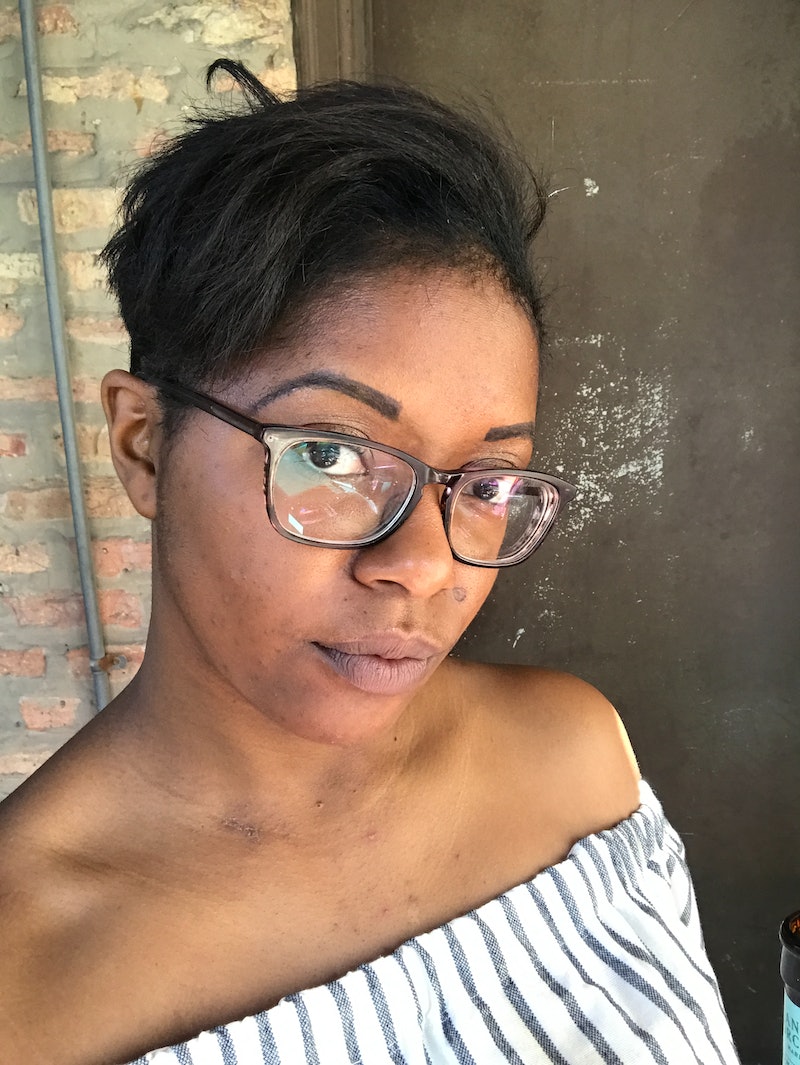 I’ve never had what some in the Black community consider to be “good hair.” Growing up, I was raised to believe my kinks had to be tamed into submission — at first by my grandmother putting my hair in constant cornrows and plaits, and later by my mother’s hot comb. Then, once I reached first grade, it was the bright pink Just For Me relaxer that was used to straighten my tresses every four to six weeks, like clockwork.

The fact that, as a child, I had no real memory of my hair being natural forced me to believe that straight hair was enviable, while my kinks were not. I even remember that at 6 years old, my grandmother warned me to never cut my long, straight hair, insinuating that sleek hair was the standard. It didn’t occur to me at the time to ask why, but I’d already internalized the so-called truth that this texture was prettier and would, in turn, make me prettier.

On top of my family's influence, 2000s pop culture also heavily impacted my views. As a Black girl who came of age in the era of MTV's TRL, I often wished to have white features like Britney Spears and Christina Aguilera. I remember sometimes praying to God to let me have straight, silky hair so I’d be considered beautiful like them, too. Even years later, when it came time for important occasions, such as prom and my wedding, I truly thought the only way to go was to get a fresh perm and put in a weave. Nobody could tell me different. So if someone had told me at that time that I'd end up defying these all those beauty rules — which would eventually lead me back to my natural texture — I would have never believed it.

My views on hair first started to shift in summer 2013, when I started working at an iconic Black magazine. The publication was helmed by a group of powerful Black women, who donned their natural hair without a care in the world. I was intrigued, and even began to imagine myself wearing my Afro tresses freely, but after nearly 20 years of using relaxer, I knew I wasn't yet willing to wear my hair as it naturally grew from my head. It was my security blanket, and as much as I admired the other women, I wasn't ready to let it go.

But in 2017, despite my late grandmother’s warnings, everything changed when I ended up cutting my hair off by accident. I had originally asked for a bob, but the scissor happy stylist I saw decided to chop off a few extra inches, which left me with a pixie cut. I was horrified at first, and thought I looked like a Black Tinker Bell without the bun. I cried for an entire hour afterward, all the way from Chicago’s Bronzeville neighborhood to my home in Lincoln Park. But, in the end, it turned out to be a blessing in disguise.

It took a few weeks, but eventually I was able to stop cringing every time I looked at my reflection. I was beginning to see myself in a new light, and I came to realize that those precious locks I’d held onto for dear life did not define me. I was still the same person I was before the cut, if not, dare I say, a smidge more confident once I got used to it. I was finally starting to let go of my security blanket, so long as my relaxer was still in the picture.

However, once my little sister — who also went through the same hair woes as me — decided to go natural a couple years later, it inspired me to rethink my views on perm. Seeing my sister rocking her full-fledged 'fro brought back the feelings I had when I was at the legacy magazine. I thought she’d never looked more beautiful, more sure of herself, and I wanted that feeling, too.

Finally ready to embrace my kinks, I came to realize that along with the inspiration from my sister, it was also my accidental pixie cut that gave me the clean slate I needed to jump-start my natural hair journey. It already allowed me to stop thinking of my hair as a safety net, and thanks to my sibling, I no longer felt like my hair needed to be bone straight to look beautiful, either.

To start my transition, I spent most of 2018 rocking some version of a protective style: box braids, Marley twists, Ghana braids, passion twists, crochet braids, and cornrows. Once I had enough new growth, I quit wearing braids and decided to wash my hair on my own, and it's an experience I will never forget. After 31 years, I was finally able to touch my own natural hair. It was the first time I’d felt my 'fro with my own fingers — it was so thick, curly, and luscious. From that moment on, I knew I couldn’t go back. This was me.

But there was still one thing left to do: my big chop. I couldn't wait to get rid of my perm, so I scheduled my cut for a few days after the wash — which happened to be Feb. 15, the day after Valentine’s Day — as an act of self-love. While I was a tad nervous leading up to the appointment, I was also excited to see my 'fro in full force. But unlike the pixie cut of years before, there were no tears this time around. Once my Afro was out, I felt a sense of relief. I felt beautiful, I felt confident, I felt ready to take on the world with my glorious crown of curls. At last, I was finally a part of the natural hair community — a place where I felt both seen and loved. It was like being welcomed into a sisterhood I never knew I was deeply longing for.

As a new natural, there is still a lot for me to learn about which products work well with my hair, the best tips and tricks for a twist-out, and how to achieve the “perfect” wash-and-go. However, one thing is for sure: I’m finally in love with my 4C kinks and coils, just the way they are — all thanks to my accidental haircut.