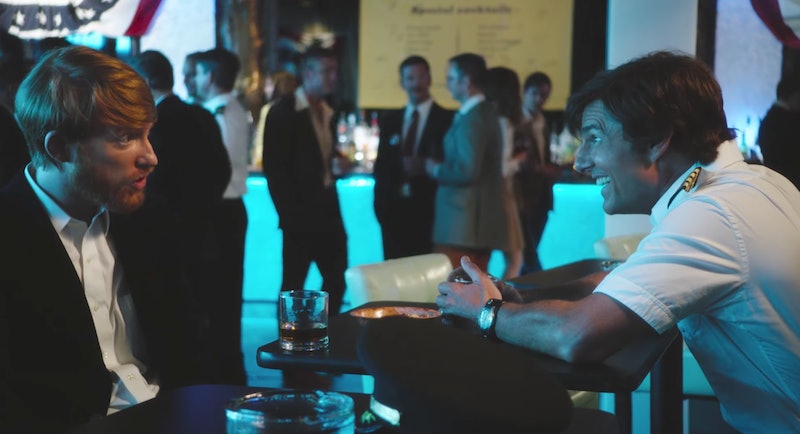 Hitting theaters Sept. 29, American Made is the latest action thriller from director Doug Liman. Based on the life of Barry Seal, pilot-turned-spy for the CIA and informant for the DEA, the true-life tale features drug-running, double-crossing, smuggling, and murder. But even with such juicy source material, can the man behind slick spy thrillers Mr. & Mrs. Smith and several entries in the Bourne film series resist adding a little Hollywood magic?Seriously, exactly how accurate is American Made compared to Seal's real life?

We'll start with a minor quibble — Cruise, the go-to guy for hyperkinetic action flicks not featuring Jason Bourne, is about a decade older than Seal was in real life, and the two men don't actually look much alike. It's understandable why Cruise was chosen, though, as he's practically synonymous with fast-paced action movies.

Then, there are the plot elements of the film. The VHS tapes used as framing device throughout the movie are likely nonexistent, a complete storytelling convenience. Also, early on in the film, Seal loses his job flying for TWA and moves full-time into drug-smuggling and working as covert government employee, but figuring out why he was fired in real life is actually pretty confusing. He was definitely busted carrying explosives over the border. Some allege they were being flown to anti-Castro Cubans, but according to Refinery29, legend has it they were headed to a U.S. federal agent.

The film has CIA agent Monty Schafer recruit Seal to run reconnaissance missions in South America. It doesn't appear Monty Schafer was a real person, or at least not one anyone involved with Seal was aware of existing. Former Marine and FBI agent Del Hahn personally knew and wrote about Seal in Smuggler's End: The Life and Death of Barry Seal. In an interview with VICE, he categorically denies Seal had any CIA involvement, saying, "There is not one iota of credible evidence that Seal ever worked for the CIA or assisted them in any operations. And the CIA denied any connection with Seal." That doesn't stop the film showing Seal as courier between the CIA and Panamanian dictator General Manuel Noriega, however. According to the film, it was on one of these missions during which the Medellin Cartel picked Seal up, and asked he smuggle cocaine into the U.S.

It's still difficult to tell whether the film's CIA involvement is pure Hollywood fantasy or real side-effect of the tangled, secretive nature of government agencies. Interestingly, director Liman's father, Arthur Liman, was a lawyer who worked on high-profile cases. One of his most famous roles was Chief Council for the Senate investigation of the Iran-Contra affair. Yep, those Contras. In a Vulture interview, Liman said of American Made, "In the case of confirming some of the events portrayed in the film, I did tap into some of my father’s work that didn’t rise to the level of making it to the hearings. We connected a bunch of dots."

What's known, and shown in the film, is that Seal did become a DEA informant after a 1983 arrest for smuggling Quaaludes. Facing 10 years in prison, he offered to become a government source, flying directly to D.C. and offering his services to the DEA. The photographic evidence he captured during a sting operation tying the Medellin Cartel to the Sandinistas was definitely real, as then-President Reagan used it as propaganda to back the Contras, according to the Washington Post. Understandably that ticked off the Medellin Cartel, who then put a bounty on Seal's head.

Even Seal's death by gunshot has conflicting elements. The movie has the Cartel find and shoot Seal as he sits in his Cadillac, with the CIA cleaning up evidence after, but PBS reports that numerous theories point to Oliver North as the photo leaker, making a (slight) case for a large scale government cover-up conspiracy.

So exactly how much of American Made can be chalked up to artistic license? As Liman himself said in a Vulture interview, "You know, we're not making a biopic." So take everything you see with a grain of salt.