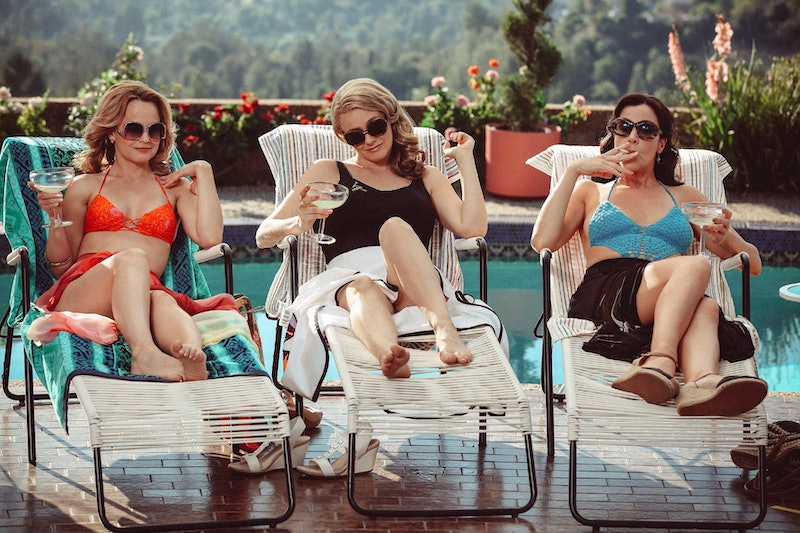 Reality television blurs a lot of line – sometimes, it’s really real, and sometimes it feels more scripted. But then again, so does regular old scripted television when it’s based on real life events. Such is the case with American Woman, a new Paramount Networks inspired by Real Housewives Of Beverly Hills star Kyle Richards and her real-life mother, Kathy. In the show, Alicia Silverstone stars as Bonnie Nelson, a 1970s woman who is forced to start a life of her own, kids and hardship in tow. How accurate is American Woman to Kyle Richards' life?

In the premiere episode, Bonnie, who lives a happy life as a California housewife, is shocked to find out that her husband is cheating on her. She confronts him, and he basically tells her that this is the family structure and to deal with it, because she has a pretty good life. There’s a lot of “I rule the roost” nonsense in his speech, and Bonnie is having none of it — she tells him to get the hell out of the house, because she’s keeping the kids and staying in it. The thing that complicates matters, though, is that the family is basically bankrupt because Bonnie’s husband has become embroiled in a pyramid scheme. Bonnie is going to have to figure out how to keep her house and her family together, and she’s going to have to do it fast.

Bonnie has to try and “have it all,” which is still a prevalent theme today, but in the 1970s, women had far fewer options. According to Ms. magazine, a woman couldn’t even get her own credit card prior to the 1974 Equal Credit Opportunity Act. Bonnie didn’t have her own bank account or have any idea about the family finances — which she kicks herself about.

As for Kyle, she talks of American Woman as a love letter to her mom, even though not all the details are exact. In an interview with the Los Angeles Times, Kyle said:

“When my mom passed away, I thought, ‘I really wanna share who she was, because she really was a special and unique woman.’ And it took my being a mom and an adult to have that extra appreciation for her. I always appreciated her, you know, but I had perspective as I got older … She wanted the best for us, and you know, she was doing her best like we all are trying to do. And I just really wanted to share that story once I lost my mom as a, I guess, sort of love letter to her, too. And just inspire other women.”

Fans of Real Housewives Of Beverly Hills will know that Kyle telling this story has caused a rift with her sister Kathy Hilton, but Kyle maintains that the story is simply inspired by her mother and that she would never begin to tell someone else how to tell their own story. “It is a fictionalized version, it’s inspired by childhood, but this is not autobiographical. The show has two sisters. It's not three. My dad's a jerk in the show; in my real life my dad was not,” Kyle told the Los Angeles Times. “Yes, he cheated on my mom. That part of the story's true," she claimed. "The other stuff, the way he talked to my mom, no. My dad was a good guy. But you know, that's what happens when you make a TV show. It’s inspired by, not based on.”

One thing that is true is Kyle’s mom’s determination. In interview on the TODAY show, Kyle said, “My mom was all of a sudden suddenly single. She didn’t know about money or what they had — she didn’t even have a checkbook!” But she was definitely a woman ahead of her time. "My mom was a very strong, outspoken woman and in that time, women weren’t supposed to be like that,” she said. “Now it’s like, ‘boss lady’ — that’s a term now. But in the ’70s, if you were strong and opinionated and outspoken, it was looked down upon. And my mom was that woman — very strong.”

While American Woman isn’t completely autobiographical, it seems to take the important parts of Kyle’s mother and presents them for the world to see.