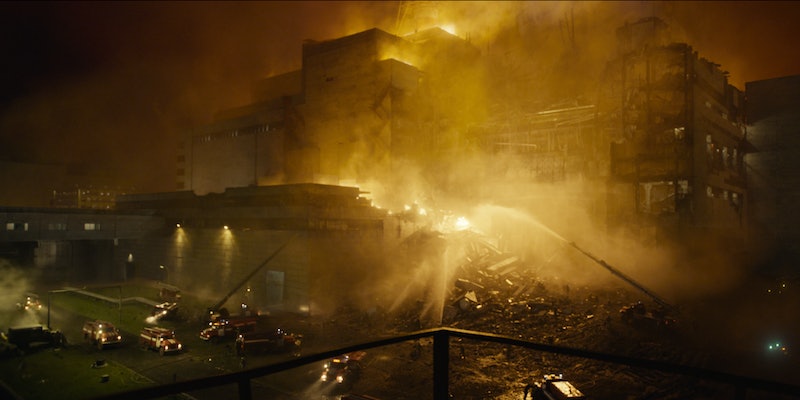 You'll never really be able to understand a true life horror unless you go through it and that's certainly something to be thankful for. But HBO's new series about the Chernobyl is probably about as close as you'll get. In an attempt to recreate the events which took place on April 26, 1986 at the Chernobyl Nuclear Power Plant, HBO's undertaken quite a feat, but how accurate is 'Chernobyl'? For all the lives lost in that nuclear reactor explosion, I'd like to be assured that the subject matter's been dealt with sensitively, and stayed as true to the events as possible, before I put it on my to watch list.

Chernobyl's showrunners have made it clear that they want their depiction to be as faithful to the real, lived events as possible. Craig Mazin, who wrote and served as executive producer for the five-part miniseries, told Deadline, “We want to be as accurate as we can be. We never changed anything to make it more dramatic or to hype it up. The last thing we wanted to do is fall in to the same trap that liars fall into." He also promised that Chernobyl is "is as close to reality as possible within five hours."

So far, critics are generally in agreement that the showrunners have lived up to their promise. In his five-star review of the show, the BBC's arts editor Will Gompertz called Chernobyl "horrifyingly accurate." Gompertz also corroborated Mazin when he said that series wouldn't be overdramatised, as the critic wrote:

"He takes you there, drags you inside, spares you nothing. Not to entertain or titillate, but to make you feel. And to make you think. Think what it must have been like. Think what it might be like if any one of the national governments currently running nuclear reactors start cutting costs and corners."

The Hollywood Reporter's review, meanwhile, contends that "the factually accurate retelling of the worst nuclear reactor disaster in history is shift-in-your-seat uncomfortable." However, where the series does fail, in terms of its accuracy, at least according to The Hollywood Reporter, is its omission of accents. "If there's a drawback beyond how difficult the story is to watch, it's the decision that was made to skip Russian accents entirely," the critic adds, adding with more detail:

"Everyone's name is Russian/Eastern European; city names, landmarks, official titles, the written word (and in a few scenes, full-on Russian being spoken over loud speakers to evacuate residents) clash noticeably with a heavily British cast told to speak effortlessly in their native tongue, making it all seem a bit like Downton Abbey or The Crown dropped into a Russian disaster movie."

While a fusion of The Crown or Downton Abbey with a Russian disaster movie might sound ideal, I'm not sure I'd like that formula to apply in this particular instance. Actually, I'd like to watch Chernobyl just so I can hopefully disagree with this critic. If you want to join me, you can catch Chernobyl when it airs on Sky Atlantic (Sky Channel 104) on Tues, May 7 at 2 a.m.