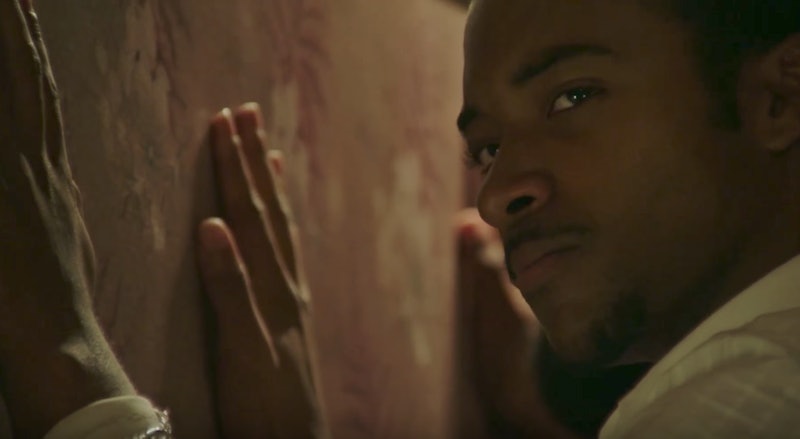 The new historical drama Detroit has a lot on its plate. From director Kathryn Bigelow, the film tells the true story of what happened at the Algiers Motel in 1967, when white policemen terrorized a group of black men and a few white women. Detroit stars Algee Smith and Jason Mitchell certainly felt the pressure to tell the story right, but, as they tell Bustle, the cast and crew also felt a responsibility to honor the current spotlight on police brutality in America. And making sure that Detroit was accurate in its retelling of the Motel incident involved balancing the film's historical horrors with modern day police violence, resulting in a painfully authentic story — one that even the stars have not yet fully recovered from telling.

The events depicted in Detroit might have happened half a century ago, but Smith, who plays aspiring musician Larry Reed, reveals that he and his castmates didn't need a history book to help them get into character. They just turned on the news. "We didn't have to search far for inspiration," Smith says, speaking over the phone. "We could just get on social media and scroll up and we would see what we had to deal with in the scene that we would shoot. ... This is 50 years ago in the script, but this is right now, today that we're looking at."

Mitchell agrees, telling Bustle, also via phone, that part of what made the actors' portrayals so authentic is how unfortunately real police brutality remain to this day. "Even with us playing historical people and real characters and all that, it still has a resignation to today's weather and climate and what's happening in our society," Mitchell says. The actor, who — spoiler alert — plays one of the three black men killed at the Algiers Motel by police, believes that the current political climate also helped Bigelow get authentic work out of her cast. "The tears were real. Everything was real," Mitchell says. "It was an incredible energy, but also something that was just really, really hard to deal with." Smith agrees, telling Bustle that some days on set were almost "a little too authentic."

The film's realness was also aided by having two survivors of the Algiers Motel episode, the real Larry Reed and Julie Hysell, on set and available to the cast and crew. Though he didn't get to meet Reed until late in production, Smith says that getting to know his character's real life counterpart made shooting the film an experience he won't soon forget. "Getting to spend time with Larry, and him showing me all the cracks in his skull and the gashes on his body still to this day," Smith says, "I don't think I've fully decompressed yet."

Having Reed and Hysell as on set resources certainly made the weight of the material more real for the actors, but also helped the cast put their own experiences on set into perspective. "I really have to tip my hat to them because, to relive that for months at a time is incredible," Mitchell says. "Looking at their faces sometimes would pull us out of any sorrow that we had... because it was all love."

Both Reed and Hysell have declared their support for the film, be it in promotional materials or even onscreen cameos. (Reed appears briefly as a man in a music studio towards the end of the film.) Hopefully their input behind the scenes will help audiences grasp the very real horror of what happened at the Algiers, an incident largely left out of U.S. history classes.

"As a black man — I'm 30 years old — and I didn't find out until I was 29 years old about the Algiers Motel," Mitchell reveals. And he isn't the only member of the cast who didn't know about the incident before working on the film. "I had no idea about the Algiers at all," Smith says. "You would be surprised how many people don't know." And thanks to Detroit, now we all will.