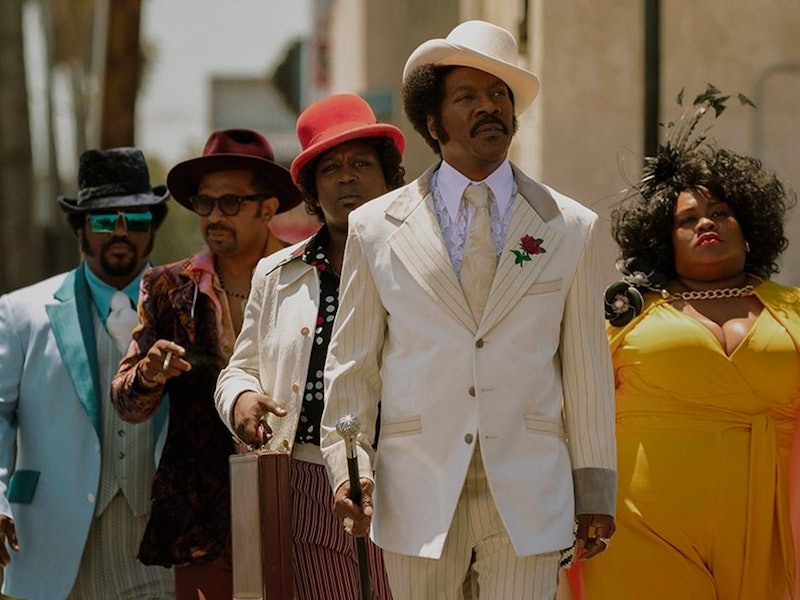 In Dolemite Is My Name, Eddie Murphy plays Rudy Ray Moore, a performer, actor, and musician whose over-the-top persona influenced a generation of black artists, but whose raunchy tone kept him from ever becoming a mainstream success. It's a wildly entertaining biopic, but to hear Moore biographer David Shabazz tell it, Dolemite Is My Name is a pretty accurate depiction of Rudy Ray Moore's life, too.

"The movie was very close to the mark," Shabazz told USA Today. Though those who knew the real Moore, who died in 2008, would never have guessed the soft-spoken, church-going man who took his mother to the National Baptist Convention every year had three decades of X-rated work under his belt, the film's depiction of his earlier years is actually quite accurate.

After a failed attempt at starting a comedy career in the 1950s and '60s, Moore became a musician hustling for success who couldn't even get his tunes played at the music store he worked at. Moonlighting as an MC, he was turned down for time onstage. But everything changed in the 1970s, when he created alter-ego Dolemite, a swaggering pimp whose catchphrase was "Dolemite is my name, and f*ckin' up motherf*ckers is my game!" At first only available on albums sold clandestinely, Moore took the character to the big screen with Dolemite, a 1975 film featuring all of Moore's friends and funded out of his own pocket (and according to the film, some shadier sources). Dolemite is loved more for its raw charisma and rhyming zings than competence and story, and endures as a cult classic that puts black faces and raunchy comedy front and center.

Even the fictional Dolemite character has roots in reality. Moore told the AV Club he was inspired by Rico, a "wino" who frequently dropped in Moore's record shop to ask for change. "He would come in there and want me to give him money for soup, 'cause he had all his teeth knocked out for messing with people," Moore said. He had Rudy sing for his supper, asking him to crack jokes for customers waiting around. "Rico did the monologue 'Dolemite.' And the people just fell out... I got Rico some reefer and some wine and invited him to my house and taped material, and then I recorded it. So this was the first beginning of my career."

Though he had some success and is widely credited as a major influence on rap and hip-hop sound and style, Moore had to keep hustling his entire life. "I been on the road six months out of the year since 1987, when my act started to take off again after the rappers, Luther Campbell and Hammer and them, was first samplin' me," Moore told the Houston Press. He got bit parts in films like 1997's B*A*P*S and, just eight years before his death from diabetes-related complications, the Insane Clown Posse's Big Money Hustlas. "You know, I hope that someday they make a movie about me," Moore told Clevland.com. "People need to know the story of Dolemite; they need to know my story." With Dolemite Is My Name, Moore finally got his wish.