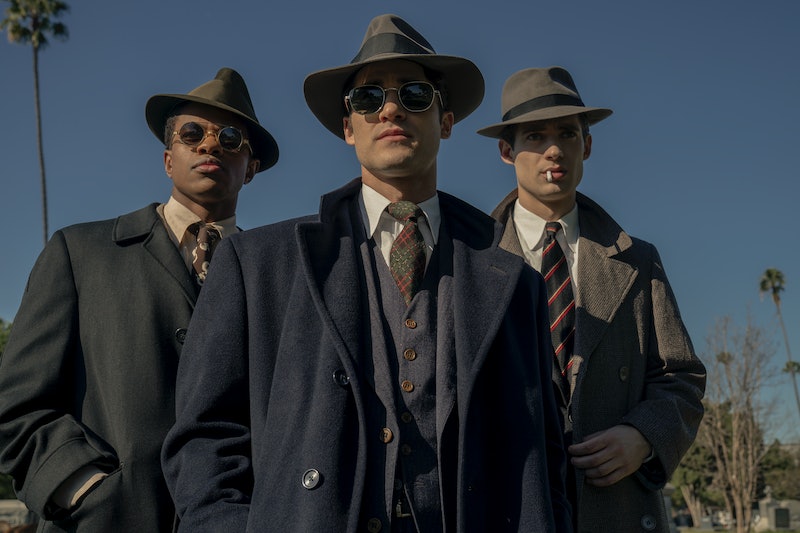 Spoilers ahead for Hollywood Season 1. As a show premised upon "what ifs," Netflix's Hollywood is not exactly an accurate depiction of 1940s Tinseltown. There are a handful of real-life figures portrayed in the show, including movie star Rock Hudson (Jake Picking), his agent Henry Willson (Jim Parsons), and Gone with the Wind actress Hattie McDaniel (Queen Latifah). But by and large, the series is a fictional reimagining of what the film industry could have been had space been made for marginalized creatives long before it happened in reality.

According to the New York Post, Hollywood is inspired by the real-life exploits of Scotty Bowers, who's been hailed as "the premier male madame and sex worker of Hollywood's postwar period." But that's only a small sliver of the story, which follows a number of young actors, screenwriters, and directors trying to make it big in L.A.

"I wanted to give some people who were dealt a terrible hand by Hollywood a happy ending," series creator Ryan Murphy told the Post. "And I wanted to ask a big, revisionist history question, which was: If these people were allowed to be who they were in the late 1940s and get that image up on the screen, would it change the trajectory of Hollywood and would it trickle down and change my life as a gay kid growing up in the 1970s who felt that I had no role models?"

That means that while some details — like director George Cukor's famed parties, Rock Hudson's struggle to remember his lines, and, unfortunately, his relationship with his predatory agent — are true to life, there's also a lot of creative liberties being taken. Whereas Hudson comes out publicly with his boyfriend Archie (Jeremy Pope) before even landing a leading role in the show, in real life, his sexuality wasn't made public until he died of AIDS-related complications in 1985, when he was 59.

The part about Anna May Wong being shut out of consideration for The Good Earth is also true: white actress Luise Rainer was instead cast to play the Chinese character, and she went on to win a Best Actress Oscar for the part. But Hollywood gives Wong some vindication: she's cast in the fictional movie Meg and ultimately wins a Best Supporting Actress Oscar, an award she was never nominated for in real life.

Speaking of Meg, it too takes some inspiration from real life: it's based around the tragic death of Peg Entwistle, who really did jump from the Hollywood sign in 1932. And there's even a nod to the rumors that McDaniel and fellow actress Tallulah Bankhead were a couple.

Overall, Hollywood is more of a fairy tale than anything else, but it does highlight people who did and could have existed — they just weren't given their due. "That's the whole magic of this show," star Laura Harrier, who plays Camille, told Elle magazine. "We're showing representation in Hollywood at a time when you didn't see it onscreen. That doesn't mean it didn’t exist. It's so crazy in these old movies that we think the world was just straight and white in the '40s. Obviously that wasn't true."