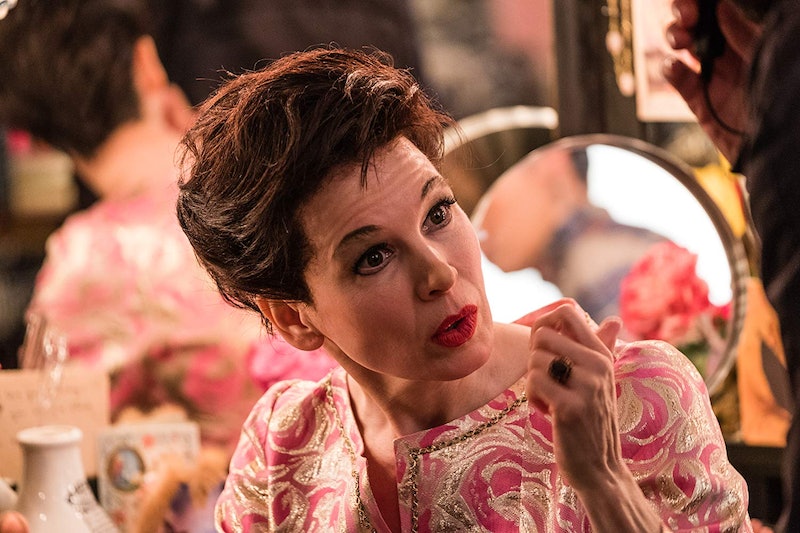 Renée Zellweger stars in the biopic Judy (out Sept. 27), disappearing into the role of a late-in-life Judy Garland. The film is set in 1968 — one year before the entertainer's tragic death by accidental overdose. While there are flashbacks to her child stardom, Garland is in her late 40s for the majority of the film, struggling with family, money, and career — in addition to various health problems and substance use disorder. And though the film is based on true events, Judy isn't a completely accurate depiction of the legendary performer.

The Judy screenplay, by Tom Edge, is based on a play by Peter Quilter called End of the Rainbow, which premiered at the Sydney Opera House in 2005. In its early stages, the play wasn't even about Judy Garland. "The original script was totally fictional; a singer struggling with life and crushed by the need to keep on performing," the playwright states in the program of a South Australia production. "When people came to see it, many commented, 'It’s just like Judy Garland.'" Inspired by the connections, he overhauled the play to explore the "car crash moment in [Garland's] life" by "beginning with fiction and evolving into truth."

Quilter has also said that the majority of the dialogue was completely invented, despite what some audiences assume. "It’s particularly nice that people think that most of [Judy Garland's] one-liners and funny comments in the play are direct quotes. Well, they’re not," Quilter said in an interview with the State Theatre Company. "In fact, there’s only one sentence in the entire play that’s a true Garland zinger and it’s one that I just couldn’t resist using. But once you get into the character of Garland, it’s quite easy to be funny. I’m much funnier as Judy than I am as myself!" The playwright didn't specify which line in the play is vintage Garland, so it's unclear whether it made it to the film. If you're a super fan of the legend, keep your ears peeled.

Refracting Garland's biography again, the film isn't a straightforward adaptation of the play. "The story in the film is much wider, it moves through different time periods and tracks many different episodes. But the essence is the same as the play — the basic story, the central character, the emotions, remain intact," Quilter continued in the same interview. "This is why the title is different. I wanted the audience to know that Judy and End of the Rainbow are different things."

The core of both versions is the same: Garland's London residency. In real life, Garland's gig at Talk of the Town lasted five weeks, from late 1968 until Feb. 1, 1969, per The Guardian. According to her obituary in The New York Times, her earlier performances went well, but things got increasingly worse as the weeks went on. On one occasion, Garland even "walked off the stage when she was heckled by the audience, whom she had kept waiting for an hour and 20 minutes."

To confirm certain details of the performances, director Rupert Goold told Forbes that the filmmakers consulted Rosalyn Wilder, the British assistant (played by Jessie Buckley) who worked with Garland during her stint in London. The filmmaker noted that Wilder was able to provide insight into "what went on in the club — the details, the layout of the band and how the evening unfolded." So what you'll see in the film should be fairly accurate.

Garland's daughter Liza Minnelli, however, was not involved in the film at all. Responding to a RadarOnline piece that reported she'd been spending time with Zellweger, Minnelli posted on her official Facebook page last year that the claim was false. "I have never met nor spoken to Renée Zellweger," she wrote. "I don’t know how these stories get started, but I do not approve nor sanction the upcoming film about Judy Garland in any way. Any reports to the contrary are 100% Fiction."

The performer has not further explained whether she has any specific issues with the movie. But in June, Minelli told Entertainment Tonight that she had not even seen the trailer for Judy. While she called Zellweger a "wonderful" actor, she also added, "I just hope they don't do what they always do. That's all I've got to say."

Zellweger, meanwhile, told USA Today that while she did unsuccessfully attempt to contact Minnelli through a mutual friend, she had no intention of reaching out to Garland's children to ask questions about their mother. "I feel like anything that she or that they would want to share about their mom and the world, they have shared," the actor said. "And anything that they’ve chosen to keep private is treasure, and I would never in my life imagine to impose in that way." Her only hope, she said, was to impart "how I perceived the project and what I was hoping from it, and to ask what they might hope from it."

So if you're looking for hard facts about Judy Garland's life, you'll be better served by another source. But if you're satisfied with an artistic interpretation of what her final year may have been like for the troubled legend, Judy will hit the spot and probably make you cry.