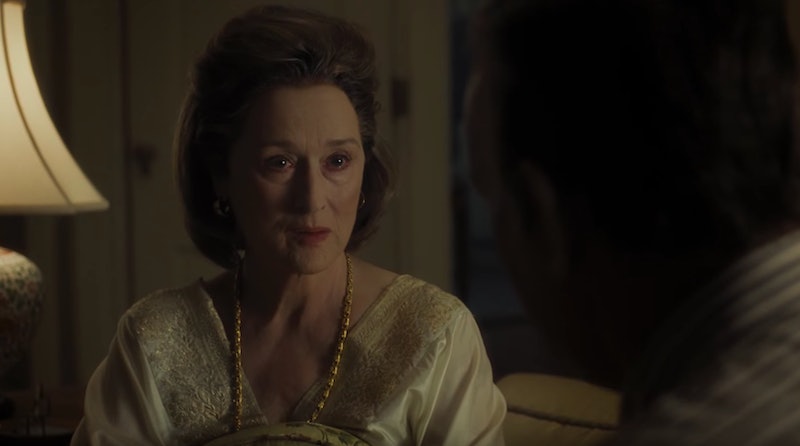 The U.S. government's antagonistic relationship with the press has created an extremely skeptical public, and repeated claims of "Fake News" have made the truth hard to determine. So when audiences see The Post, Steven Spielberg's new historical drama, they'll be judging it on a new scale from "truth" to "fake news." But just how accurate is The Post? Well, like any good movie based on real events, it's somewhere in the middle.

Written by Liz Hannah and Josh Singer, The Post tells the true story of Katherine "Kay" Graham, a trailblazing publisher of The Washington Post and eventual CEO of The Post Co. "I read Graham's memoir, Personal History, and I absolutely fell in love with her," Hannah recounted in an interview with Vulture. But, instead of writing a biopic, Hannah decided to narrow the scope to just the publication Pentagon Papers, an event she saw as a true turning point in Graham's life as a woman and as a publisher.

However, unlike many films that are based on true events, Hannah did not base her script on any one historical account. Instead, the first time screenwriter drew inspiration from multiple memoirs, including Graham's own autobiography and journalist Ben Bradlee's A Good Life: Newspapering and Other Adventures, according to The Washington Post. What results is a movie that, while close to the truth, is not trying to be a definitive account of history.

Critics of The Post's historical accuracy have largely pointed the film's treatment of The New York Times as the fictionalization of the past. It was The New York Times, not The Washington Post, which first published excerpts of the Pentagon Papers, kicking off a major legal battle between the press and the United States government. And while this fact is certainly established early on in the film, some have taken issue with how the NYT's incredible decision to publish is downplayed in favor of telling Graham's story.

After spending months authenticating the Papers and preparing a strong legal defense, The New York Times published the first excerpts in 1971. President Richard Nixon promptly filed an injunction to stop the paper from publishing any further documents, a move that led to the 1971 Supreme Court case New York Times Co. v. United States, largely considered a momentous win for First Amendment rights. And many people connected to The New York Times have made public their displeasure at being sidelined in The Post.

One current high-ranking NYT employee spoke anonymously with the Columbia Journalism Review, saying, "We find it annoying and silly that we are being relegated to being a minor player in what is one of the biggest moments in our journalistic history." In an essay published by The Daily Beast, former vice chairman of The New York Times James C. Goodale wrote quite simply, "For Hollywood now to create the impression that The Washington Post was the key driver responsible for the publication of the Pentagon Papers or the the [Supreme Court] case is — well, it's Hollywood: good drama but bad history."

The Post screenwriters have defended themselves against critics taking issue with their treatment of The New York Times. "We worked very hard to give The Times their due," Singer said in an interview with Indiewire. "We reached out to folks at The Times to make sure we were getting it right." However, as Hannah pointed out, the movie The Post is fundamentally not about the NYT, nor is it really, at its core, about the Pentagon Papers. For her, the true heart of the story lies in the relationship between Bradlee and Graham — "an unromantic love story" is how she described it to Indiewire.

One day, Hollywood will no doubt make a movie about The New York Times' decision to publish the Pentagon Papers and their Supreme Court fight against the Nixon administration. The Post is not that movie.