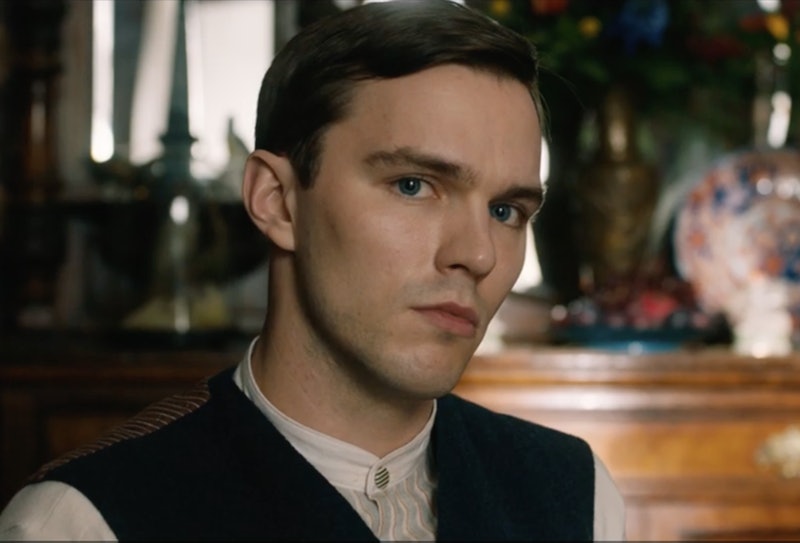 On May 10, a new biopic of The Hobbit and Lord of the Rings trilogy author J.R.R. Tolkien starring Nicholas Hoult and Lily Collins hits theaters. The movie tells the story of the author's young life, before he published some of the most beloved fantasy novels in history. Fans of the writer, who died in 1973, will surely want to know whether the film is accurate to what actually happened, and if liberties are taken, are they out of character? Just how accurate is Tolkien?

One thing's for sure, it has not been officially endorsed by the family. The Guardian reports that the Tolkien estate released a statement in April declaring that they "wish to make clear that they did not approve of, authorise or participate in the making of this film." While that statement may sound like a singular condemnation, in reality it's par for the course for the Tolkien estate. The Guardian cites examples of legal action the estate has taken in their position of being highly protective of Tolkien's legacy, including suing Warner Bros. over licensing issues regarding Lord Of The Rings gambling machines. So it's unsurprising that they'd flatly reject a biopic adapting a life's nuance to breezier film format. Per The Guardian, a spokesperson for the estate explained that the statement was "intended to make its position clear, rather than [herald] future legal action." Fox Searchlight did not respond to the publication's request for comment.

“We are so proud of Dome Karukoski’s film Tolkien which focuses on the early years of J.R.R. Tolkien’s extraordinary life and does not depict subject matter from his novels. While we did not work with the Tolkien Estate on this project, the filmmaking team has the utmost respect and admiration for Mr. Tolkien and his phenomenal contribution to literature.”

EARLIER: IndieWire reports that Tolkien's director Dome Karukoski wasn't bothered by the estate keeping its distance, as it might have suffocated the film. “You shouldn’t mess with the estate, so the film can exist purely for your own reasons and your own feelings about the characters," he said at a post-show Q&A. "We did very, very thorough research, we understand these characters, and the emotional truth of them is very true. To dig out the emotional truth of the characters, you have to try to not hide certain evidence.”

While that still might make it sound as if Tolkien had some dark Balrog hidden in the recesses of his past waiting for a chance to escape, what it really means is that films, by their nature, take liberties towards their own aims, which put audiences above the subject shown. In this case, Tolkien focuses solely on the author's early life through his service in World War I, and even that's through the lens of what might have been a real-life influence for Lord Of The Rings.

The screenplay, written by David Gleeson and Stephen Beresford starts off when young Ronald, as he was known, moves with his mother and younger brother to Birmingham. His mother dies soon after, with the boys left in the guardianship of a Catholic priest. Per The Mirror, Ronald really did live in the same house as his future wife Edith Bratt, who inspired many of his characters. She really studied the piano, while he focused on language. Their relationship encountered similar issues to the fictionalized version in the film, including his guardian's disapproval and Edith's engagement to another man.

Similarly, Tolkien's "fellowship" of close friends, who play a large par in the films both as boys and men, really existed, calling themselves the T.C.B.S. (Tea Club, Barrovian Society). In a Collider interview with the cast, the actors shared how those friends' real-life letters, diaries, and posthumous books of poetry shaped their performances in the film. However, as none of the main subjects are still alive, it's impossible to ensure that all the details are correct.

To be fair, if filmmakers refused to bend any part of reality to depict a life, audiences would end up watching the world's longest home video and be bored to tears. Every movie ideally comes with a built-in point of view to share with viewers, who can add their own opinion and information — while Tolkien gets the facts straight, they're in service of the film, not the man. And that's not necessarily a bad thing.

More like this
Letitia Wright's Aisha Encourages A Vital Conversation Around Immigration
By Maxine Harrison
Idris Elba & Tom Hollander Lead This Year’s Must-Watch Christmas Flick
By Maxine Harrison
You Definitely Know The Voice Of Shuri's AI In 'Black Panther: Wakanda Forever'
By Brad Witter
This James Bond Event At Abbey Road Studios Was A 007 Fan's Dream
By Samantha Rollins
Get Even More From Bustle — Sign Up For The Newsletter