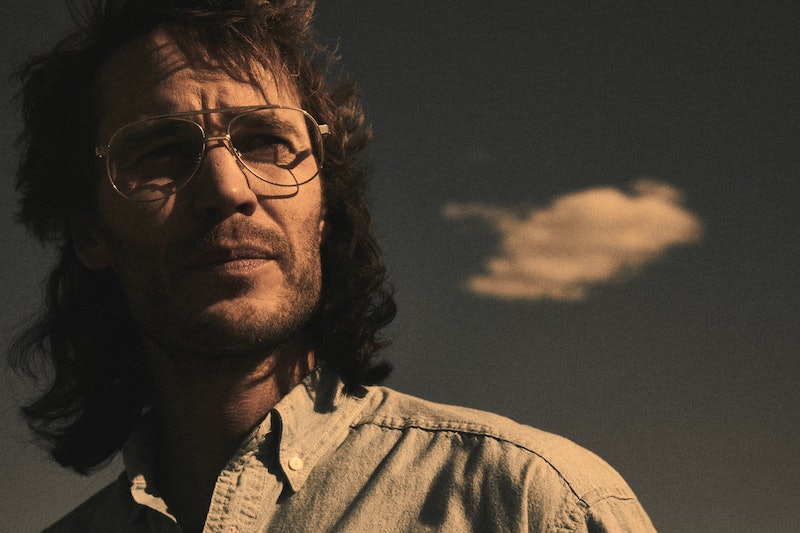 In the 27 years since the Branch Davidians' 51-day standoff with the FBI left 76 people — including leader David Koresh — dead at the fringe religious group's Waco, Texas compound, there have been many retellings of the events onscreen and in the media. But Paramount's 2018 miniseries, Waco, seems to be one of the most accurate.

The show is inspired by two books: A Place Called Waco: A Survivor’s Story by Branch Davidian survivor David Thibodeau (played by Rory Culkin in the show) and Stalling for Time: My Life As An FBI Hostage Negotiator by FBI negotiator Gary Noesner (portrayed by Michael Shannon). According to Time, the two men met for the first time on the show's set, as they both served as advisers to the production.

Taylor Kitsch, who plays Koresh, tells Bustle that Thibodeau proved to be an invaluable resource, as he emailed the memoirist often to ask about even the most minor details regarding Koresh and life in the compound. "He helped a lot in the sense of just validating certain choices or vice versa," Kitsch says. The actor also did extensive research on his own, reading scripture and Koresh's writings and losing weight to look the part.

Julia Garner, who plays Branch Davidian Michelle Jones, did heavy research as well, though information on her character was harder to find than information on Koresh. Michelle represents a faction of the Branch Davidian sect that has been largely voiceless: the women, some of whom were Koresh's "spiritual wives" and child bearers. "I just wanted to look at a lot of pictures of the women," Garner says. "What their expression was, how they were kind of standing or walking — just random details."

Ultimately, Waco does get some details wrong, including that Koresh started the Branch Davidians (that was Victor Houteff in 1930); that Noesner was present for the entire 51-day siege (he pointed out to Time that he was only there for the first 25 days); and that the siege marked the end of the Branch Davidians (according to the History channel, a second group of Davidians have since settled in Mount Carmel; they call themselves Branch, The Lord Our Righteousness and are led by Charles Pace, who became a Davidian in 1973 but left the compound after Koresh's rise). But Thibodeau told The Dallas Observer that he understands some creative license was "necessary to create drama," and that he was satisfied with how the show turned out. Noesner, meanwhile, told an audience of friends at a preview screening that he was "delighted" with Waco's depiction, and that much of the dialogue between FBI agents was taken directly from his book, according to Smith Mountain Laker magazine.

Overall, Thibodeau told The Bangor Daily News that he believes Waco marks "the first time that all sides of the story have been told."

More like this
Dr. Anna Pou Is Still Practicing Medicine After Facing Murder Charges
By Brad Witter
'Children of the Underground' Subject Faye Yager Now Runs A North Carolina B&B
By Brad Witter
The 'Black Bird' Stars Are Both Heading Back To Apple TV+
By Brad Witter
22 Movies On Netflix That Are Perfect For The Whole Family
By Bustle Editors
Get Even More From Bustle — Sign Up For The Newsletter

This article was originally published on Jan. 24, 2018