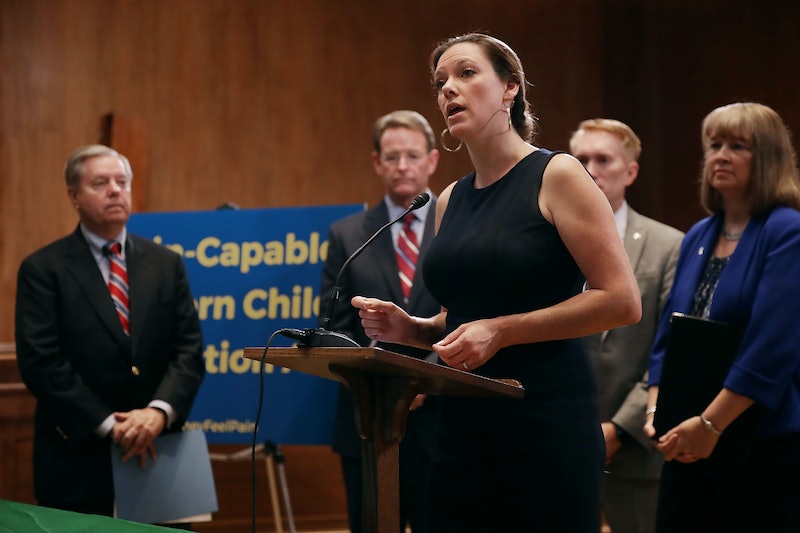 Reproductive rights have come under fierce attack in states across the country in recent years: in 2017 alone, a total of 19 states adopted 63 new abortion restrictions, according to the Guttmacher Institute. And while the names of the more vocal anti-abortion politicians are well known — Mike Pence, I'm looking at you — there's one group you've likely never heard of that's been working behind the scenes to advance legislation restricting access to abortion for more than 45 years. Americans United for Life (AUL) calls itself "the legal architect of the pro-life movement," and it's been advocating for such measures on both the state and federal levels since before the Supreme Court handed down its landmark decision in Roe v. Wade.

While the group's main focus has been in the United States, it's also worked on anti-abortion measures as far afield as Ireland and Latin America. The group reportedly has been involved in every "significant" abortion-related case to come before the Supreme Court since 1972, and successfully defended the Hyde Amendment, which restricts federal funds for abortion services, in 1980. Most recently, AUL filed an amicus curiae brief in NIFLA v. Becerra, a case that will see the Supreme Court ruling on whether a California law requiring crisis pregnancy centers to post information regarding free abortion and contraception services violates free-speech rights or not.

But a significant portion of AUL's work appears to center around pushing legislation at the state level. The group claims to be "the pioneer" of the state-based legislative strategy, which Deanna Wallace, AUL's director of legal communications, says it implemented "to make sure that when Roe v. Wade is overturned that the states are in a position to protect their children, to protect their women from the abortion industry." Because while much of AUL's work focuses on regulating abortion providers as a means of limiting access to the procedure, overturning Roe v. Wade remains its ultimate goal.

"They recognized that it was going to be a long haul to overturn Roe," Wallace tells Bustle of the group of pro-life attorneys who founded the organization in 1971. "But we wanted to make sure that we'd built a foundation in the states so that when it was overturned, it was overturned for good. That those protections were in place leading up to it and afterwards as well."

AUL essentially creates templates of anti-abortion legislation, which lawmakers can then adapt and tailor to their individual states. It's a fairly effective strategy, Elizabeth Nash, a senior state issues manager at the Guttmacher Institute, tells Bustle.

State legislators' time is very limited in most cases and they're expected to be experts on a range of issues and typically they have very limited staff to help them understand everything ... So when they can find tools to help them, they use those.

Legislation aimed at restricting abortion really exploded in 2011, when a total of 92 such regulations were enacted across the country. According to Nash, that was the highest number of abortion restrictions the United States had seen since Roe v. Wade was decided.

Part of the reason behind the increase was the fact that a Tea Party wave in the 2010 elections ushered in a number of conservative lawmakers eager to pursue anti-abortion legislation. But that influx wasn't the only thing responsible for driving up the number of abortion restrictions; the availability of model legislation drafted and shared by groups like AUL also helped.

"Many of their models have been enacted across the country on a number of different topics," Nash says. "It really seems like they put themselves in a good position when the state legislators became much more conservative after the 2010 election."

Each year, AUL puts out Defending Life, a detailed guide of model legislation that also includes "report cards" for all 50 states. Wallace says those report cards help generate a feeling of friendly competition among pro-life lawmakers. This year's version drops Tuesday, the day after the Roe vs. Wade anniversary. Many of the legislation models in Defending Life are known as "Targeted Regulations on Abortion Providers," or TRAP laws.

According to Nash, TRAP laws are essentially a means of skirting the Supreme Court's ruling in Roe v. Wade.

The idea behind TRAP laws was that this would be a way to essentially limit, or even make it impossible to access abortion, without actually banning the procedure outright. The idea here is that if enough regulations are placed on abortion facilities that they will be forced to close their doors. And once the clinic has closed their doors, then access has been diminished for women in that area.

Nash argues that while such TRAP laws work to limit access to abortion, they don't do anything reduce the need for abortions in the first place.

[I]f you close half of the abortion clinics in a state you'll probably reduce the abortion rate. But that does nothing to reduce the need for abortion. What we know to be helpful, when we're talking about abortion and healthcare, is to make health care accessible so that people become pregnant when they're ready. And that includes increasing access to contraception services as well as sex education as well as just generally making health care more available.

By contrast, AUL has drafted model legislation aimed at assisting state lawmakers in prohibiting health insurance plans from covering most abortions. If enacted, such legislation could ultimately make abortion unaffordable for a number of women.

"An abortion typically costs about $500. That's a lot of money to come up with on short notice," Nash says. "So when you take away insurance coverage you're putting women in a real pickle."

As for the future, Wallace says the election of Donald Trump — who promised to appoint judges to the Supreme Court that would work to overturn Roe v. Wade — has energized AUL and other anti-abortion activists. In 2017, President Trump appointed Charmaine Yoest, a former AUL president, as his assistant secretary of public affairs at the Department of Health and Human Services. So the group likely stands to expand its footprint and influence even further under the Trump administration.

"It's inspired a lot of people to get more involved because we're not fighting an uphill battle anymore," Wallace says of Trump's election. "We're on an even keel finally and we have administration officials, and HHS officials, and legislators that feel very, very strongly about the life issue and are willing to come alongside us instead of ignoring us."