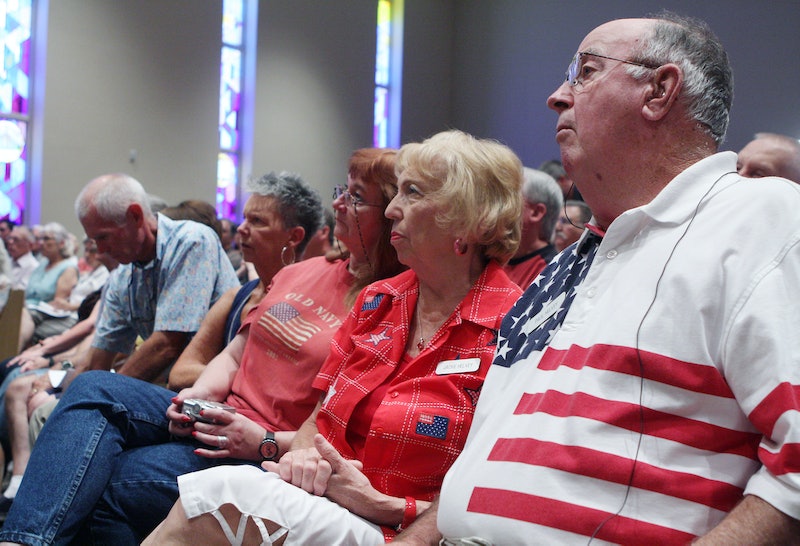 The rollout of the American Health Care Act, the Republicans' plan to replace Obamacare, has been a feeding frenzy for political groups of all persuasions. Democrats have taken aim, claiming the American Health Care Act cuts coverage to poor people while cutting taxes for the rich. A surprisingly strong chorus of attacks has come from conservatives within the Republican Party, as well, complaining that the bill will preserve most of the structure of the Affordable Care Act instead of reforming American health care into a free market structure.

But perhaps the most dangerous enemy that Trumpcare could be making are the people who will be most adversely affected by the health care plan, aka senior citizens. That's right, few critics could be more terrifying than Americans 65 and over.

Here's why it's not young-gun protesters in the street or even necessarily the people shouting at town halls who should worry the Republicans behind the plan: One of the changes from Obamacare to Trumpcare would be in the "age rating."

Under the Affordable Care Act, insurers are limited to charging older people only three times more than young people, despite old people costing much more than that compared to the young. This is aimed at leveling out the costs so no individual has to pay too much.

However, under the American Health Care Act, that would be expanded to 5-to-1, meaning many older Americans will have to pay more. And this has made the American Association of Retired Persons (AARP), the largest group representing seniors, very unhappy.

The AARP is targeting the change as an "Age Tax" for how it requires older people to pay more simply by virtue of being old.

"Older Americans need affordable health care services and prescriptions. This plan goes in the opposite direction, increasing insurance premiums for older Americans and not doing anything to lower drug costs," the AARP said in a press release. "AARP stands ready to work with both parties on legislation that puts Americans first, not the special interests."

If Trumpcare passes, it could harm a group that was instrumental in putting Trump in the White House.

The AARP is a dangerous enemy for Trump's health care reform to have.

First of all, AARP membership is huge — over 37 million. Secondly, senior citizens are known for being politically active — they have more time on their hands and tend to receive more government assistance. In general, voter turnout increases by age.

This was true in the 2016 election, and older Americans voted for Trump by a large margin. Americans aged 45 to 64 (the age group who would be most affected by the changed age band in Trumpcare), voted for Donald Trump by a 53-44 margin, according to New York Times exit polls. So if Trumpcare passes, it could harm a group that was instrumental in putting Trump in the White House.

The AARP seems to be hoping that pointing that out to its members could kill the bill. The ad above asks AARP members to call their representatives in Congress and ask them to vote against expanding the age band.

Granted, getting a good deal from the ACA hasn't stopped many seniors from voting for Republicans planning to repeal it so far. But if the AARP starts to turn its members against Republican health plans, it could be a problem for the Republican party as a whole.