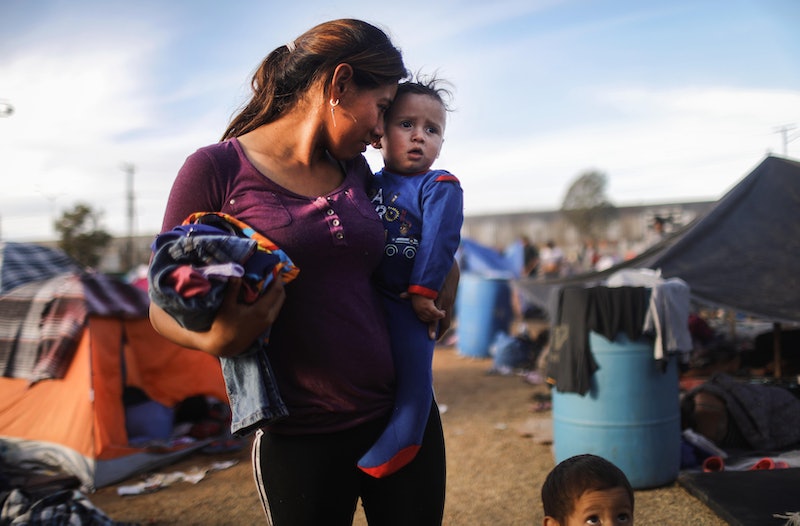 As migrants reach the United States and Mexico border, some people may be wondering how applying for asylum works in America. It's a topic that seems to be making rounds in the news considering the men, women, and children seeking to enter the country through the southern border, as many of them flee domestic violence, gangs, and other violence in their native countries.

And getting here hasn't been easy, as already dozens of migrants have been arrested and tear-gassed at the border, according to CNN. The current development at the American and Mexican border comes after President Donald Trump's controversial family separation policy which he ended in June as well as former Attorney General Jeff Sessions' "zero tolerance" immigration remarks from May. The collective purpose of the current administration's policy was supposedly to deter migrants from applying for asylum in America.

In both affirmative and defensive applications, asylum seekers are interviewed by an American official who determines whether or not their plea to stay within America is adequate enough. This is based on whether the person has a "credible fear" if they were sent back to their native land. This is the initial screening in the interview process and most people tend to pass it.

Once that first step is out of the way, an asylum seeker is then on his or her way to make their case in front of an immigration judge.

Now, you might be wondering, "How long does this all take?" Considering the number of applications for asylum in America, it can take up to several months to even appear before an immigration court judge.

And what happens in the meantime? Well, migrants often have to wait in detention. If the migrant arrives with his or her family, there are family detention units for such cases. But even those have certain federal regulations based on how long a child can be kept in such a place.

And how about the success rate? According to federal data reviewed by TIME magazine, asylum was granted to only 5,639 applicants out of a group of 20,563 "credible fear" applications. In other words, it's a long, exhausting, and profoundly uncertain battle.