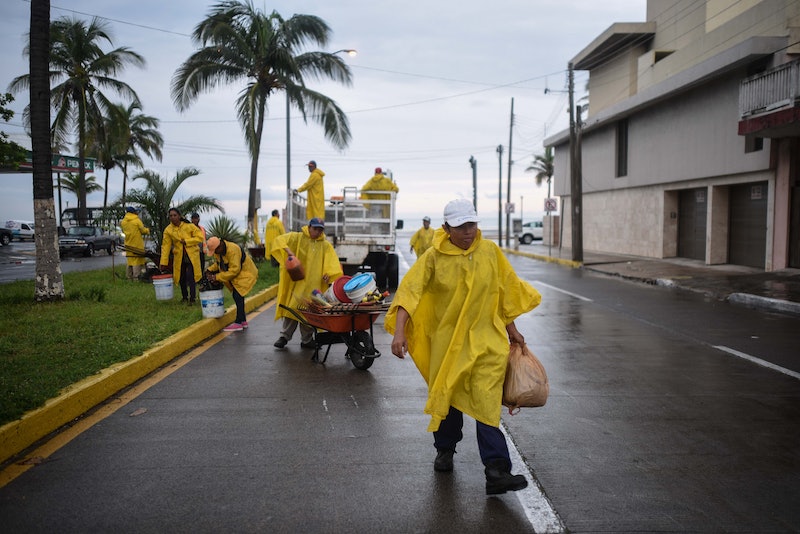 It's hurricane season in the southeastern U.S. and residents of the southern states will be on guard for the next several months. But right now, all eyes are on Hurricane Harvey as it reaches Texas coast. You may be wondering how bad is a Category 3 hurricane?

The Saffir-Simpson Hurricane Wind Scale determines the classification of the hurricane, and also helps us predict how severe the storm might be and how much damage it could do. According to the scale, a Category 3 hurricane can inflict devastating damage with winds from 111-129 mph. The NHC describes the possible damage of a Category 3, saying,

Well-built framed homes may incur major damage or removal of roof decking and gable ends. Many trees will be snapped or uprooted, blocking numerous roads. Electricity and water will be unavailable for several days to weeks after the storm passes.

A weather system begins as a depression. Once the depression reaches a sustained wind level above 39 mph, it becomes a tropical storm, which is also when it receives a name. The names of storm systems are determined by the NHC, which uses six lists that rotate annually with pre-picked alphabetical male and female names. By 11 a.m. Thursday, Harvey had maintained 65-mph winds.

Once sustained winds breach 74 mph, the storm is classified as a hurricane. According to the NHC, a Category 1 has winds of 74-95 mph, which are dangerous and can cause some damage to roofs, shingles, gutters, and trees nearby. Power outages could occur from uprooted trees or falling poles. A hurricane is considered a Category 2 when the winds reach 96-110 mph. The damage is similar to a Category 1 but more severe. A Category 2 is more likely to see trees uprooted and power lines going out.

According to CNN, Harvey is currently predicted to make landfall in Corpus Christie, TX. late Friday or early Saturday morning. Along with damages due to the high winds, the storm could also bring rains up to 30 inches in parts of Texas, and 12 to 20 inches other places.

As of Thursday morning, a state of emergency had not been issued in Corpus Christie by Mayor Joe McComb but the emergency operations center had been opened.