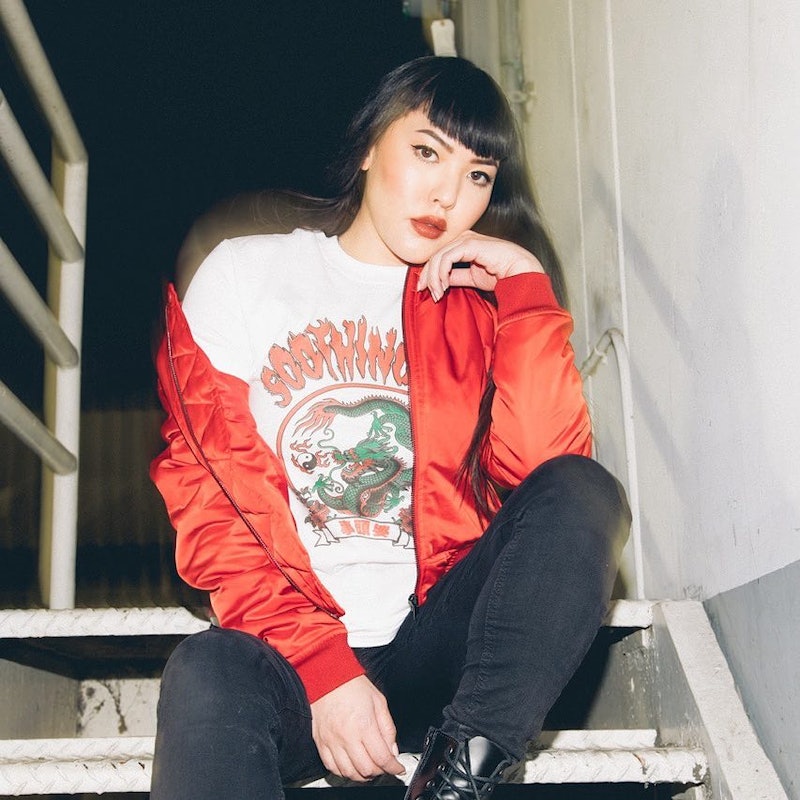 In 2018, Bustle will remove the word "flattering" from all of our fashion, beauty, lifestyle, and entertainment content. This means you won't catch our editors or staff writers describing a dress, a lip color, or a particular cut of swimsuit as "flattering," nor will we use the adjective in reference to any celebrity's fashion or beauty choices — on-screen or off. Consider it our new F-word. Bustle Editor-In-Chief Kate Ward wrote a letter explaining why we've made the editorial decision to do this. However, everyone has a different relationship with the word, so we also want to provide you with personal perspectives on what flattering means to different people: The word, the construct, and the consequences. This is Stephanie Villa's take.

Over the last four years, Stephanie Villa, known by her legions of fans as Soothing Sista, has grown a huge YouTube and Instagram following because of her badass mentality and her unique sense of style. In a social media world filled with millions of influencers who look and dress the same, Villa has always been true to herself, dressing only in clothes that she loves and makes her feel confident and empowered. While Villa has remained unfazed by popular trends and other people’s opinions, the fiery vlogger wasn’t always so sure of herself — she did struggle with insecurities at a young age, just like everyone else. But instead of allowing it to bring her down, Villa believes it made her stronger and helped inform her current sense of style and confidence today.

Still, Villa never really ever gave much thought to the word flattering, until Bustle asked her how the word made her feel. She realized the effect it has on people — how damaging it can be when determining your personal style and how discouraging it is when you are figuring out what you actually want to wear. But in a way, she’s never really subscribed to the idea that you should dress in clothes that “flatter” your body anyways.

A self-proclaimed “weird kid,” Villa thrifted, wore styles from different decades, and mixed and mashed clothes together in an alternative style that got her judgy stares from her peers, but made her feel great. And that’s definitely helped her catapult into the successful influencer she is today — her "no f*cks" attitude about what other people think, so long as she feels confident and happy. Here’s her story in her own words.

"When I think of the word flattering, I do think of skinny, looking thin, hiding fat — those are all of the things that come up [in my mind] and I never really thought of the word as directly related to looking skinny until now, when [Bustle decided to start the conversation]. It made me really start to think.

Growing up, I was a gymnast and also a swimmer, so I had pretty broad shoulders I guess for how little I am and I always kind of avoided sleeveless shirts. In terms of what I think of as proportional to my body, that’s what I’m self-conscious about — my shoulders and my arms. I always avoided sleeveless things because I thought it made me look really big on top. I also avoided spaghetti strap because I started to get bustier at a younger age. I avoided tight clothing because I didn’t want attention in that way. But I think this all guided me into my style now which is that I love t-shirts, I wear a lot of vintage shirts, because I used to seek those things out when I was young. My mom and I were always shopping at Good Will and stuff, so we were always thrifting. That guided me into my style. That’s where it’s grown into.

I know when I was younger, I avoided certain clothes because I was self-conscious, but now I am comfortable with my body. My body fluctuates a lot in terms of weight but at this point, I just dress for myself. I’m lucky because growing up, I wore really weird things all the time… and my mom was kind of just like, ‘Yeah, wear whatever you want!’ She never really minded my style, as long as I wasn’t wearing anything too revealing. My mom was super supportive of me wearing whatever I wanted.

I think kids really thought I was weird. I would make the strangest combinations. I would wear these really '80s pointy shoes with a strange smock thing. I honestly was a strange kid, but I was lucky because not only did I have my mom who was supportive, I also had my big cousin who was like my brother, who pretty much told me at a young age that if somebody’s judging you, then that’s their problem, not your problem. I definitely got teased for my outfits, especially when I started wearing tomboyish clothes, but I’ve had the same confident and strong mentality from a young age.

I never used Tumblr, I never really read blogs, I only started watching YouTube when I was in college and that’s when I started to watch styling videos. My cousin (who was like my big brother) not only told me to not care about what other people say, but he also would take me to different shows in San Francisco and Berkeley, so from a young age, I was surrounded by a lot of people who thought outside of what is traditionally beautiful. I thought all these bands were so cool. Two of my biggest idols growing up was Karen O from the Yeah Yeah Yeahs and Beth [Gibbons] from Portishead and neither of them dressed in a traditionally feminine way. I think Beth especially, she would just wear jeans and shirts and didn’t really follow any traditional lines of what women should look like. I had those influences from early on and luckily, that let me see other women who didn’t care about what society was telling them to look like.

In the past, I’ve gotten comments or messages or emails from some of my subscribers who tell me they’re struggling with [finding their own sense of style] and a lot of times, they talk about how their friends are judgmental and that they are being teased for straying from the pack with their sense of style. It’s so frustrating to me, because I think their friends should be embracing their unique style and their individuality. In certain groups of friends, they’re so tight that it’s difficult to accept when somebody else is becoming different. My advice to them? If they can’t embrace you, then you need to discuss it with them and if they still can’t respect you after that, that’s their problem, not your problem. People, especially your friends, should be accepting of you, especially for something like your outward appearance. You should just keep on doing what makes you happy, and if that means dressing in a way that’s unconventional, keep doing it!

These days, I have a very basic uniform that I wear all the time. I love skinny black jeans, a band shirt or some sort of printed shirt, my Doc Martens, and a leather jacket. Whenever I put that kind of combination on, which is pretty much every day, I feel super confident. I feel like if you put on something that makes you feel badass and like you can take on the day, you should just keep rolling with that. Because really, who cares what anyone else thinks."