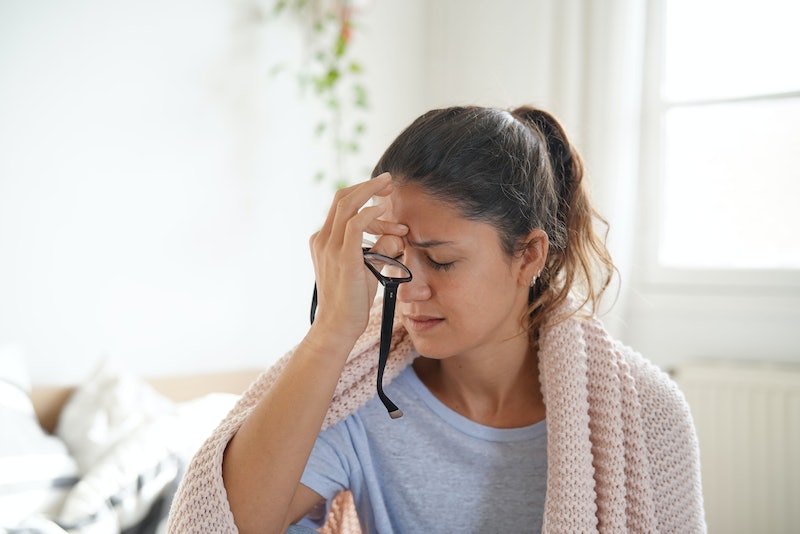 Humans have likely been experiencing hangovers — that charming mixture of nausea, headaches, light sensitivity, cognitive issues and other symptoms — since alcohol was first created for our consumption nearly 10,000 years ago. However, just because the morning after the night before has a long history, doesn't mean we understand it fully. "We don’t really know what causes hangover per se," Dr. Robert Swift, Professor of Psychiatry and Human Behavior at Brown University and a leading researcher on the pharmacology of alcohol, tells Bustle. "There’s still different theories about what causes it." The answer, it appears, may lie in the brain — and what happens in the brain when you're hungover is more fascinating and controversial than you might think.

The impact of hangovers on brain function is complicated. Dr. Sally Adams, an assistant professor in health psychology at the University of Bath, tells Bustle that her research shows that the day after heavy drinking, people experience problems with "short and long-term memory, sustained attention and psychomotor skills," and that decision-making, impulse control and emotional processing also suffer. Many parts of neurological function are involved in a hangover, from hormones and neurotransmitters to the brain's electrical activity. Here's what we do know about what your brain looks like when you're hungover — and how intense the neurological impact of excessive drinking really is.

More like this
This Psychological Effect Might Be Keeping You From Hitting Your Goals
By Lexi Inks
Got Brain Fog? Here Are The Best Supplements For Memory & Cognition
By Carolyn Steber
I Tried The Ice Barrel's Cold Therapy Tool & Now I Like Ice Baths
By Allie Flinn
Rachel Zegler Reveals She Had Breast Cancer Scare
By Radhika Menon
Get Even More From Bustle — Sign Up For The Newsletter