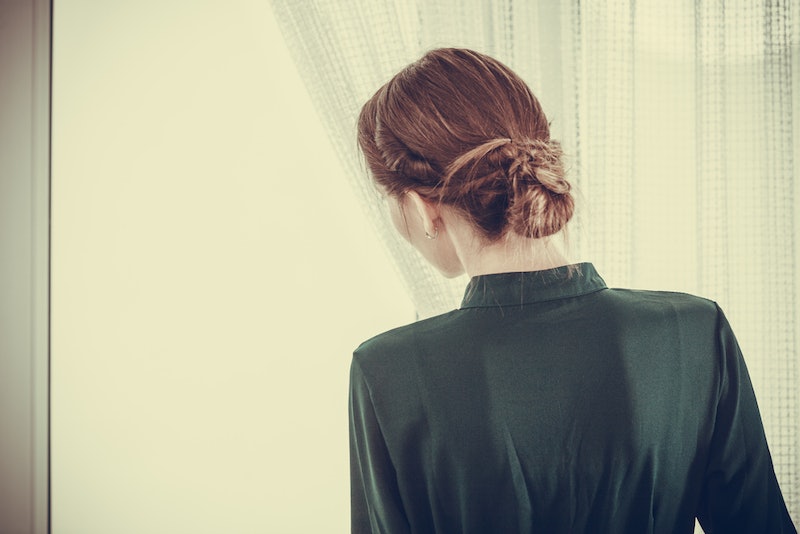 Everybody has felt lonely. It's one of the quintessential human experiences, and feeling lonely can trigger a period of sadness — or a period of self-discovery, depending on how you approach it. Benedictine monk Laurence Freedman, an advocate for "embracing solitude," told 1843 magazine in 2018 that loneliness can involve a “terrible feeling of failure, and there’s shame in that. Lonely people feel they should be connected, and if they feel disconnected, alienated, then that must mean they’ve made a mistake – or that they’ve been pushed into this by fate, or by something they’ve done." Beyond the social and cultural ways in which we frame loneliness, though, there are the ways being lonely can actually change our brains.

Where does loneliness "live" in the brain? It's a complicated question, but in 2018 a study revealed that there is in fact an area of the brain that appears to show a lot of activity when people feel lonely. The right inferior temporal gyrus, or right ITG, is most well-known for helping us process and recall faces. "The positive relation between loneliness and spontaneous activity in ITG, which is one of [the] brain regions that participates in social-information processes, may reflect the greater readiness of processing social information among lonely people," explain the scientists in the study. Our brains really want to find other faces to look at, goes this theory, so the ITG lights up and tries to find them.

The brain also reacts to the experience of loneliness chemically, and in mice, at least, the chemical response is a stress one. A study published in Cell in 2018 found that mice who spend two weeks in isolation show higher levels of brain chemicals related to stress behaviors, and it makes them more fearful and prone to erratic reactions. It's not clear if that's the case in humans, but it would definitely explain why time alone can make you feel a bit jittery when you venture out into the social world.

One part of the brain that appears to benefit from isolation, or at least a bit of quiet time, is the "default mode network": a collection of areas that combine when our brain's at rest, and seem to create our internal sense of identity. The parts that comprise the default mode network, according to one of the scientists that discovered it, Dr. Marcus Raichle, are related to things like memory processing and emotion. “You add this all together, and you see there’s something very central, something that has to do with the fact that I have a self — it’s me,” Raichle told meditation app Headspace in 2017. When we're alone, we don't have other people to distract us — and if we don't immediately turn to Netflix or mindless Insta-scrolling to fill the time, our default mode network kicks in, helping us ruminate and contemplate our lives.

There's a dark side to this, though. Isolated brains may be more likely to be depressive because of weaknesses in the default mode network. Scientists in 2015 suggested that people with depression have slightly differently constructed default mode networks, and that can make them more prone to "rumination," or endlessly revisiting sad or upsetting thoughts and memories — which likely makes loneliness worse.

The brain has numerous reactions after it experiences isolation; for one, several areas activate to drive it to find social encounters. A study in 2016 found that particular neurons called dorsal raphe dopamine neurons react to loneliness in mice and push them to find other mice for social time. Chronically lonely brains can also become more vigilant towards threats and more paranoid, sending increased threat signals about stuff that would previously not be worth worring about. Loneliness can also cause damage to the immune system. Over time, a lonely existence can rewrite your synapses and how you see the world.

Loneliness may not be the worst thing in the world, but for the lonely brain, it's can be a source of confusion, stress and pain. If you're feeling lonely, it's time to acknowledge the source of your woes and try to forge some human connections — and feed your interaction-hungry brain.

More like this
Why Experts Say Sleeping With A Fan On Isn’t Totally Risk-Free
By Sophie McEvoy
The Best Time To Date After A Breakup, According To Experts
By Bustle Editors
Are Virgo & Capricorn Compatible In A Relationship?
By Kristine Fellizar
Virgo & Sagittarius Zodiac Compatibility, According To Astrologers
By Kristine Fellizar
Get Even More From Bustle — Sign Up For The Newsletter