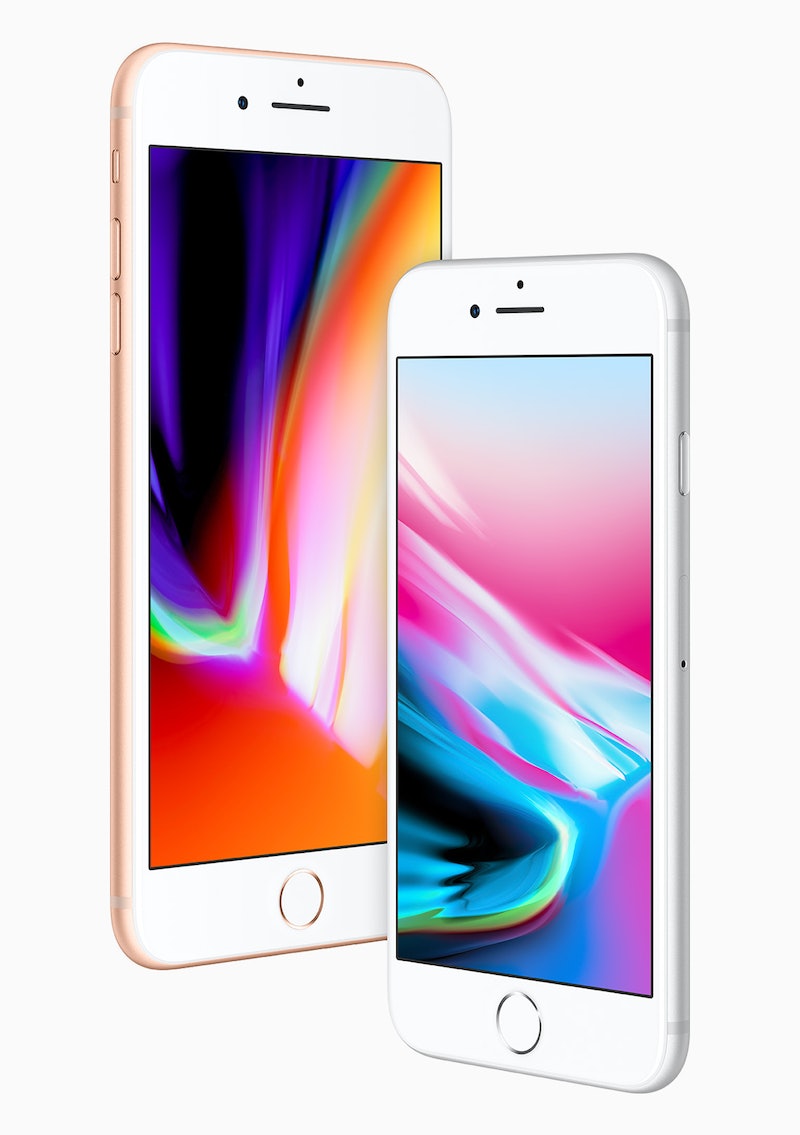 In the age of ever faster, better iPhones, it was pretty easy to predict that there would also be a larger version around the corner. Almost every product line update physically grew upon the last — especially if there was a larger Samsung to contend with. Now, though, the competition has moved to other aspects, not just the phone's physical size. The iPhone 8 is just as big as the iPhone 7, with a 4.7-inch Retina HD display and an aluminum body.

While that's not unusual for an "S" model (the half updates that you've probably grown accustomed to every other year) to be about the same size as its predecessors, it is strange for a new number model. But that's where the iPhone 8 Plus, with its 5.5-inch Retina HD display, comes in. The iPhone 8 is similar to the iPhone 7, but one of the key differences of this set of iPhones is that it has a steel-reinforced glass back that distinguishes it entirely from its predecessors, as it enables wireless charging.

The iPhone 8 starts at $699, and the 8 Plus at $799. While the former may not look all that different from the 7 model, you shouldn't let that fool you. There is plenty that's new.

Both the iPhones 8 and 8 Plus will run on the A11 Bionic, which Apple is calling "the most powerful and smartest chip ever in a smartphone." The A11 Bionic, its press release notes, "features a six-core CPU design with two performance cores that are 25 percent faster and four efficiency cores that are 70 percent faster than the A10 Fusion, offering industry-leading performance and energy efficiency. A new, second-generation performance controller can harness all six cores simultaneously, delivering up to 70 percent greater performance for multi-threaded workloads, giving customers more power while providing the same great battery life."

Also exciting is the new wireless charging feature, something that the competition has had on Apple for a while now. Really this is induction charging, and to do so you must place the phone on a special pad — called the AirPower, and set for release sometime next year — a lot like how the Apple Watch charges now. Instead of plugging in a lightning cord, you just set it down — quite an improvement in charging ease. Then there's the cameras, which are seeing a bump on both the front and back.

The phone also has a glass back panel and, of course, comes with the new iOS 11 software. But this is pretty much where the iPhone 8's similarity with the premium model that was also announced comes to an end. The iPhone X has a lot larger screen than the iPhone 8, and perhaps surprisingly it does it without exceeding the size of the 8 overall.

That's because its OLED display stretches from one side of the phone to the other. That results in a display that's even bigger than the iPhone 7 Plus — although because of the dimensions watching things like videos doesn't necessarily happen on a bigger surface area. There's talk that the new display could delay manufacture, though, so if you're leaning toward an iPhone 8 instead, it could make it to your doorstep a lot faster.

One final thing that grew about the other iPhone model this year, the iPhone X, is its larger than life price tag. The phone may be smaller than others in the past (the iPhone 7 Plus is larger), but it's sticker shock is significant. The iPhone X price tag starts at $999 — far more than any iPhone before it.

The iPhone 8 is not the largest phone ever, and it does not have the largest screen. But given that the price tag has remained more affordable than the iPhones 8 Plus and X, you can at least afford to put this phone in your pocket.