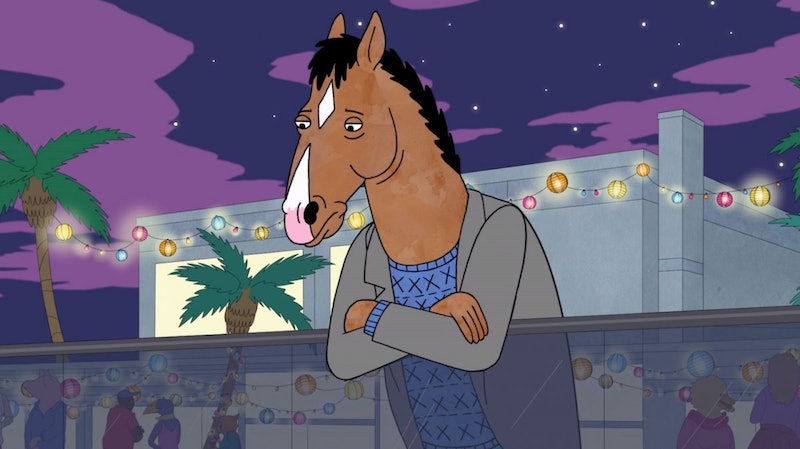 On Friday, September 8, the fourth season of Netflix's Bojack Horseman premieres, bringing us more tales from the life of a washed-up sitcom star who's also a talking horse. But while casual fans might see only a Hollywood satire, close viewing of the show reveals that Bojack is something more — namely, the most realistic depiction of depression and addiction on television.

When TV shows try to depict mental illness, we often end up with reductive dilutions and offensive stereotypes — think Jessie Spano's "so excited" meltdown on Saved By The Bell, The Big Bang Theory's Raj Koothrapapali struggling to talk to women while sober, or pretty much any explanation of any criminal's behavior on a police procedural, ever. Even in rare moments when shows do get it right, they often lose touch with the reality of mental health issues at the end of the plot arc (ahem, Rachel from UnREAL). That lack of accurate representation isn't just frustrating; misinformation about mental illness in the media can increase stigmas, and make people who are struggling with their own mental health feel confused and isolated.

While a handful of shows like You're the Worst and Crazy Ex-Girlfriend have indeed garnered praise for their characters' honest struggles with mental illness, BoJack stands out for its raw depictions of depression. It avoids easy answers or false epiphanies; instead, its realistic portrayal of depression has the power to make sufferers — and the people who love them — feel seen.

In a 2016 interview with Vice, Bojack creator Raphael Bob-Waksberg explains that the decision to foreground Bojack's mental health issues didn't come from a desire to make a statement; rather, it grew from from a determination to portray mental illness respectfully and in a way that was more based in reality than other shows:

The goal was never like, Let's really create an expose, let's really investigate this kind of thing, let's diagnose BoJack in a certain way. I think it was more about just trying to write this character truthfully, and taking him seriously. The idea [was to take] a character trope that is maybe a little archetypal, or that we've seen before, but really believing in it, and trying to be honest and respectful to it.

And the show is honest about it, to an extent rarely seen on TV. Bojack is a washed-up '90s comedian. He is also depressed. And while plots in the first three seasons saw BoJack attempting to pen his memoirs and reignite his long-lost career, the show's real focus was often his self-immolating behavior, sexual escapades and a quest to find anything — be it a substance, another body, or any kind of pleasure or pain — that could make him feel alive.

With this situation in place, Bojack commits to knocking down mental health myths — including ones shored up by many other shows and films, like that mental illness can be overcome by sheer willpower (Pretty Little Liars) or finding a partner (Silver Linings Playbook) or a moment of epiphany (Willow's magic addiction on Buffy the Vampire Slayer), or that mentally ill people are usually a danger to others (Hannibal, Dexter, and countless others).

Bojack shows that a person/horse's circumstance is not a determining factor in mental health. Bojack's wealth and fame give him endless privilege — but not a vaccination against depression. Characters fall in and out of love with each other, and see their prospects rise and fall. What we see as viewers is that none of this changes their suffering, that no amount of money or success can make you happy when your brain refuses to allow it.

BoJack Horseman isn't just unique in the way it portrays its protagonist's struggles; the show stands apart because, unlike shows where one character is "the depressed one," almost everyone in Bojack's orbit is dealing with these issues. Through its characters, Bojack shows the variety of ways people can react to depression: shut down and disappear, like Alison Brie's Diane Nguyen; turn to substances, like Kristen Schaal's Sarah Lynn; or put on a fake smile, like Paul F. Tompkin's Mr. Peanutbutter. Or, you do all of the above and more, like BoJack.

Bojack also takes viewers further into the inner landscape of depression than any other show, never shying away from depicting what it's like to have a disease that convinces you that you are poison, that the world is worse off with you in it, that there selfishness is in existing. In a Season 2 episode, BoJack's mother, after reading his memoir, delivers a monologue to him that was one of the most-discussed moments of the show — and which echoes what many of us who struggle with depression hear in our own brains every day:

“I know you wanna be happy. But you won’t be. And I’m sorry. It’s not just you, you know. Your father and I, well, you come by it honestly. The ugliness inside you. You were born broken. That’s your birthright...You’re BoJack Horseman, and there’s no cure for that.”

BoJack Horseman excels most in moments like this, where it examines elements of depression known only by those who suffer from it. As someone who has lived with depression my whole adult life, having a show like this has been invaluable. Every single character represents almost every facet and symptom I've experienced at one point or another while dealing with this disease that keeps trying to destroy me. There is solace in representation, in not suffering alone. Writer Han Angus discussed this at Nerdy POC, in an essay titled, "Bojack Horseman Makes Me Feel Like My Depression Is Understood." The show's insistence on showing that money, success, and material goods don't help depression, Angus notes, are what

...makes Bojack Horseman so special to me, I feel understood...Whilst I understand not everyone will agree with this being the representation of depression, I hope they know it makes some of us feel like we aren’t alone.

But this deep dive into what depression can really feel like isn't just meaningful for people struggling with depression — it can also be helpful for those on the outside who know and love someone with depression. The show gives them an opportunity to understand what their loved one is dealing with, while also seeing themselves represented as passengers in what is rarely an easy ride.

The show isn't just important because it makes people feel seen. It's important because it shows people with mental illness as complex, relatable humans (and horses, and cats, and birds, and dogs) — and that makes a difference. Most media representations of people dealing with mental illness are negative — a 2010 UK study found that 45 percent of TV characters with mental illnesses have storylines that position them as threatening — and those negative representations have real world consequences. A 2006 study found that "dramatic and distorted images of mental illness" in entertainment and news media have a huge impact on the lives of people with mental illnesses — according to the study, being deluged with these kinds of negative images can "impair self-esteem, help-seeking behaviors, medication adherence and overall recovery." Honest, respectful shows like Bojack make a genuine difference in how people perceive themselves, and each other.

This all makes BoJack sound like one endless downer, which it isn't; it's one of the funniest shows airing right now, and it does have pure moments of hope. It's honest about both the ways depression can pull and grasp, and the way that belief in a future can go on. The show juggles all these thoughts at once, just like we do.

For those of us with depression, yes, we might start to sink today. But there’s going to be a day where you don’t. That’s why we take our medicine, and drink water, and go to therapy, and remember to shower and eat and do the tiny things we have to in order to feel alive. Sometimes, it’s so hard to remember to do those things.

And you have to do it every day. That’s the hard part.

However, as Bojack reminds us, it does get easier.

More like this
Jurnee Smollett’s Heart Is Healing
By Rebecca Carroll
Every Single Big & Small Way You Can Fight For Abortion Rights
By Tess Garcia
6 Abortion Advocates To Follow On TikTok
By Sara Youngblood Gregory
For These Abortion Clinic Volunteers, Going TikTok Viral Is A Risk Worth Taking
By Audra Heinrichs
Get Even More From Bustle — Sign Up For The Newsletter