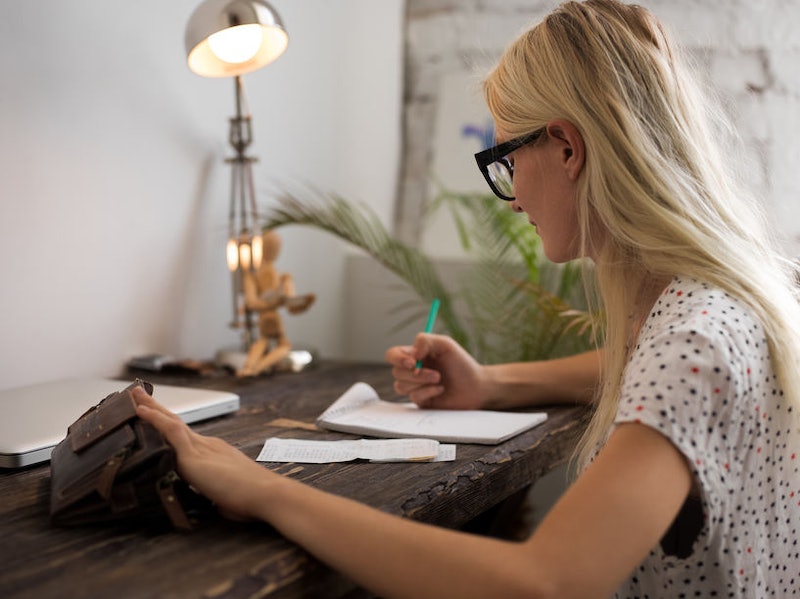 Back in May, I attended the launch of a book called I’m Not Broke, I’m Pre-Rich. It was 8 a.m. on a Friday morning in the centre of London and it was jammed. A room full of women of all ages gathered to hear Emilie Bellet, the book's author and co-founder of women's financial service Vestpod, speak. Uniting this room of ladies was the need to talk about one thing (or at least learn how to start): money.

“I created Vestpod because I found it hard to talk about money with family and friends. I found it easier to speak with strangers,” says Bellet. During her time as a private equity analyst, she became aware of the disconnect between larger financial institutions and the public, particularly women. With one third of mothers being the primary breadwinner and the current forecast that 53 per cent of millionaires will be female by 2025, it is important that women are financially informed and empowered. As such, Vestpod organises workshops like How To Negotiate Your Salary or How To Invest, areas that women typically lack confidence in. According to a survey by consultancy Britain Thinks, in the UK, only 38 percent of women said they feel confident making investment decisions, compared to 53 percent of men. The workshops are hosted by women for women, as Bellet believes that there is something very powerful about a room full of women being open and honest about their finances. “We don’t want women to feel shame and embarrassment,” she explains.

You're Not Broke You're Pre-Rich By Emilie Bellet
Amazon

Bellet is one of a few women in the UK working to remove the stigma around money for other women. Money is crucial to our everyday lives yet it is a topic that Brits would still rather run away from. A recent survey found that people would prefer to talk about their weight, mental health, and family disputes than the dreaded m-word. But obviously we need to talk about it if, as the Financial Times' report found, the current gender pay gap is 11.9 percent and eight out of 10 women work for employers that pay men more.

Difficulty talking about money is rooted in shame, but initiatives like the #MakeThemPay campaign for Elle UK in 2013 have led to eye-opening conversations about money. Alex Holder was the woman behind the campaign. Its premise was simple — ask male colleagues what they earn. “The idea of even talking about money seemed so un-British, even just reading the sentence ‘ask your male colleagues what he earns’ makes people shudder. Because you couldn’t not have an emotional response to that,” Holder says. The campaign was so successful that it was backed by David Cameron and written into law in 2015.

But where does the embarrassment to talk about money come from? In 2015 when Kate Winslet was asked about the gender pay gap in an interview with BBC Newsbeat, she said: "I'm having such a problem with these conversations. I understand why they are coming up but maybe it's a British thing. I don't like talking about money; it's a bit vulgar isn't it?" This statement was in stark contrast to Jennifer Lawrence’s essay decrying the unfairness, written that same year. Winslet since qualified the remarks, telling E! online in 2016 that, of course, women should be paid the same as men.

Dame Helena Morrissey attributes the embarrassment to a natural British reserve that, once set in, is hard to break down. “We’re not upfront about a lot of the aspects of our lives and when it comes to money I think there is an embarrassment factor,” she says. As the founder of the 30% Club, Dame Helena campaigns for greater representation of women on the boards of FTSE100 boards with a target of a minimum of 30%. She has also just launched the Girl Fund which allocates more capital to companies that score well for gender diversity at board, executive, management and workforce level.

It doesn't help that historically money just wasn’t a conversation women were a part of, according to Professor Nicky Marsh at the University of Southampton. “The things that women should be interested in in a gendered society are those that are primarily caring, nurturing, private,” she says. “So they should be interested in relationships, in reproduction, the domestic realm. And they are things that money can’t touch. Once money touches those things, it’s immoral and tainting. So women can’t talk about money because then they either are not being women and not interested in the domestic realm anymore or they are bringing the tainting corrosive thing into the domestic realm and that’s kind of dangerous.”

As Cambridge University Press notes, until the 1960s and 70s, men in Western societies were typically the breadwinners. Therefore, financial advice for men often talked to them like earners and speaks of women like homemakers. Professor Marsh says that this stretches back centuries, with financial advice beginning to appear in the 18th century, in books like Thomas Mortimer’s Every Man His Own Broker. Women, on the other hand, were told how to keep books, manage the household and be careful with money.

Not much has changed. Recent research by Starling Bank shows 71 percent of money articles in women’s magazines encourage women to seek out vouchers, discounts, bargains and coupons to save money. By contrast, 60 percent of financial articles in male magazines tend to speak to men as if they’re savvy financiers, offering advice on the best tech to use to enhance their investments.

Relationships with finance changed in the 1980s, when people in the UK were fed the idea that “greed is good”. “A vast series of guides emerged during this time telling women how to take control of their money, start up their own businesses, and invest,” says Dr Amy Edwards at the University of Bristol. “Money and conspicuous wealth became a much greater part of day-to-day life and popular culture.” Fast forward to the 2010s and the invention of social media with people constantly posting their #perfect lives has made this worse. Not only do these apps feed us multiple images of different fabulous lives but with the click of a few thumbs we can also buy parts of that life. And perhaps contribute to whatever debt we might have and are ashamed to talk about.

However, there is a bubbling movement counteracting this. An anonymous Instagram account called My Frugal Year was set up earlier this year by a woman (who we’ll call Rebecca) wanting to talk candidly about the £27,000 debt she and her husband had accrued. They had reached a tipping point with no way out and needed something to hold them accountable. She doesn’t use hashtags and, while she found a community on Instagram quickly giving her tips, Rebecca ultimately believes in a bespoke approach rather than the extreme financial "diets" that are out there. “I have to have a life alongside this otherwise what’s the point?” she explains.

She says those who came across her account suddenly felt like they were being seen. “There were so many messages from people, mainly women, saying they could have written that piece themselves, that they didn’t know there were people out there experiencing the same thing. ‘I feel so stupid for getting into this position. It’s such a relief to hear someone else talk about it’” Rebecca tells me. “That’s the main motivation for carrying on really.”

As The Guardian reports, the average UK household debt is £15,400 so Rebecca is not unique in her financial issues, but she’s found a way to communicate the debt in a way that’s approachable and relatable. Money difficulties can be exceptionally isolating and talking about it, while terrifying, will only lighten the load. People will say “I’m broke” to their mates but what’s really behind that? Do they need to cut back on the coffees or are they just barely holding it together? Financial journalist Laura Whateley thinks it comes back to shame. “I think there’s a fear of revealing yourself to be less successful, less winning at life because you earn less money or of embarrassing other people by revealing that you earn more than them,” she says.

The author of Money: A User’s Guide, Whateley wrote the book to cut through the jargon out there. Even though she worked on The Times’s Money Desk until recently, she was just as stressed as anyone when it came to personal finances. She admits that there’s an assumption that you’re a financial expert if you work in finance. Despite being a lot more conscious of money than when she was in her 20s, she still finds money a stressful topic like everyone else. But the way to make it less stressful is definitely to talk about it.

“It’s important to make it more a part of our lives in a more natural, less charged way. If you set something up for a moment that’s really stressful you’re going to inevitably associate money with something bad,” notes Dame Helena.

Holder builds on this, taking into account the fact that many women only discuss money annually for their pay rise. “It’s this conversation that looms and causes so much anxiety. You’ve got one chance and you’re not going to be able to ask again for another year. Because if you’re only really going to talk about it in that high stakes moment, of course you’re going to fluster your words and be all red-faced,” she says.

Imagine how much more empowered you would be during that conversation with your boss if you had asked your friends the following questions: what are they earning, how they worked for a pay rise, how did they last ask for a pay rise, how did they follow up, what did they say, did they respond. “Whereas often people haven’t really thought about it, they don’t know what they should be asking for,” Holder continues. “No boss wants to make it easy for you to get more money.”