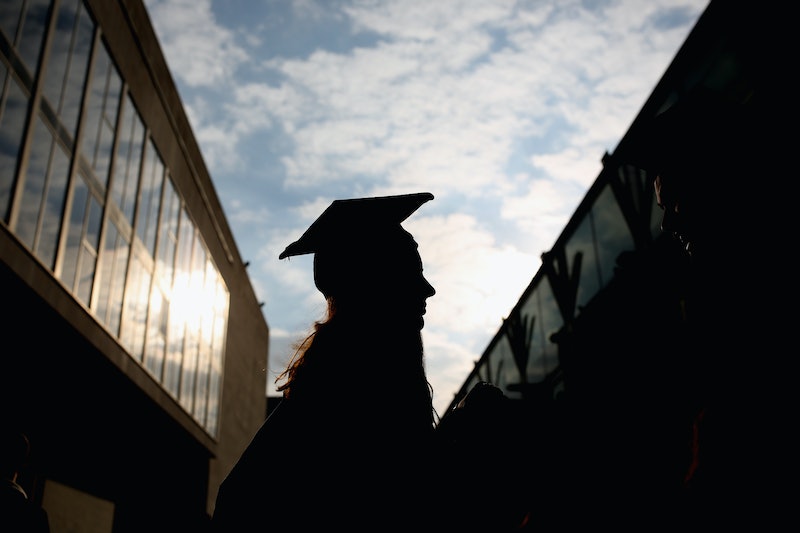 A proposal is currently making its way through the California state legislature that would ease the burdens of students dealing with unintended pregnancies. California SB 320 would require colleges to offer abortion medication services, and it is set to be voted on by the state's senate by the end of January. If passed, the bill could also set an example for pro-choice student activism across the country.

The law wouldn't apply to every college, but all public state universities, meaning all health centers in the California State University and University of California systems. Even though these health centers receive state funding, the medical abortion services would not be bankrolled by the state. Instead, the estimated $14 million would be covered by the Tara Health Foundation, the Women's Foundation of California, and a private donor.

"I was able to meet a few peers who attempted to get an abortion through the student health center, and they faced a lot of hurdles, mostly bureaucratic, before they were able to get an abortion," Adiba Khan, who led the project, told NPR.

Studies show that college-aged women are among the populations that most often seek abortions. A 2016 report from the Guttmacher Institute found that 8.2 percent of abortion patients in 2014 were between the ages of 18-19, and 33.6 percent were aged 20-24. That same year, 24 percent of patients were currently enrolled in school.

"Educational goals are often cited as a reason to delay childbearing," the report reads, "as many individuals wish to complete their schooling and better position themselves economically before having children."

When a patient undergoes a medication abortion, she takes a pill containing misoprostol and mifepristone to block the hormone progesterone, which is required for a fetus to develop. It can be a painful process, but it's considered to be one of the safest ways to conduct an abortion.

Although abortion may be sought by students who experience an unintended pregnancy, it is frequently difficult for them to access such services. A 2015 survey from the American College Health Association looked at 152 educational institutions across the country and found that only 2 of them, or 1.3 percent, provided on-site medical abortions.

While 100 schools, or 65.8 percent, provided referrals for abortion services, off-site abortion services can also be tough to access. A 2014 Guttmacher Institute report found that only 10 percent of all U.S. counties had an abortion care clinic. The report noted that California was one of the states that offered the easiest access to abortions; Wyoming, Missouri, and Mississippi were some of the worst.

Title IX requires schools to give students time off for getting an abortion or dealing with its aftereffects, if a doctor says that the student needs to be absent. But it doesn't make it easy for students to find a clinic — and considering the amount of anti-abortion legislation in the U.S. right now, there are significant legal hurdles in their way, too.

After the Senate vote, SB 320 will be voted on by the state assembly and reach the governor's desk for a signature. If the bill is successful, it will mandate that the applicable California state schools offer medical abortion services by 2022.