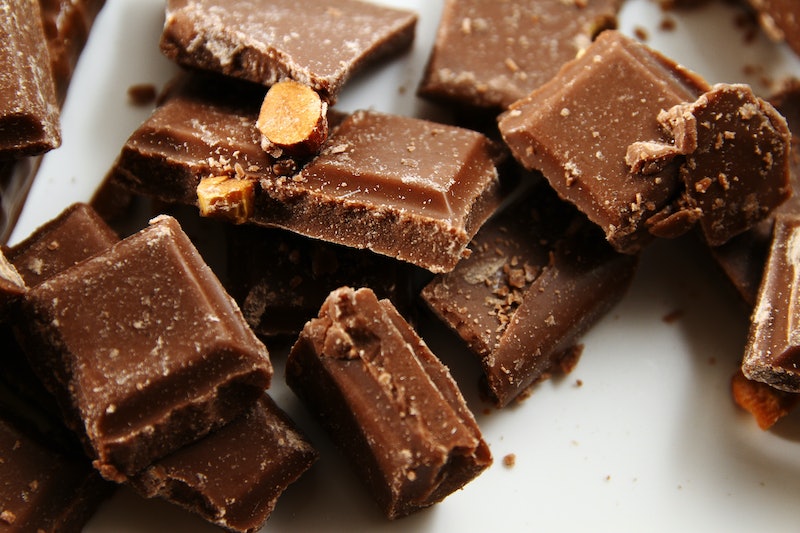 If you’re anything like me, you’re of the general opinion that all chocolate is good chocolate. If there’s a specific variety or brand of chocolate of which you’re particularly fond, though, I have some… slightly bizarre news for you: Why you like that chocolate might not actually have much to do with the chocolate itself. According to a new study, how chocolate is packaged has a huge effect on how much we actually like the chocolate inside.

The human brain is such a weird, weird thing.

The study, which comes to us from researchers working out of the University of Melbourne in Australia, was recently published in the open-access journal Heliyon (which means that, happily, it’s available to read for free!) — and its findings have some fascinating implications with regards to the mysteries of why we like the things we like. After all, as co-lead investigator Sigfredo Fuentes, PhD, noted in a press release about the study, “an estimated 60% of consumers’ initial decisions about products are made in stores solely by judging the packaging.” It seems that product design matters a great deal when it comes to our enjoyment of certain things — and, indeed, might sometimes even matter more than what’s actually inside the packaging.

For the study, 75 participants between the ages of 25 and 55 were recruited through email invitations sent to both staff and students of the University of Melbourne. The only requirement for those who volunteered to participate was that they be chocolate consumers — that is, they didn’t needed to eat chocolate with a certain degree of frequency, have specific likes or dislikes when it came to the varieties of chocolate they preferred, etc. Once these participants had been assembled, they evaluated both the taste of chocolate and how they liked six different packaging concepts under three conditions: A blind condition, a packaging-only condition, and an informed condition.

The two taste tests, which were held under the blind condition and the informed condition, used the same chocolate — a dark chocolate with a cocoa content percentage of 70. But a great deal of thought went into the six packaging concepts. The fictional brand name, for example — “Chuff” — was drawn directly from the Australian slang term “chuffed,” which means “very pleased”; the suffix “-ed” was removed to “make it a little unknown,” but the word remained both slightly recognizable and with a positive connotation for the market to which it was intended to appeal. The “Chuff” logo was also designed to be “simple and universal to reach the Australian market,” while each of the six specific packaging designs, which were created by a graphic designer with experience in actual food label design within the industry, were “new and … not available in the marketplace to ensure that consumers did not have previous experiences with the concepts.”

That is, you wouldn't find any of these in the selection of wrappers used for the study:

These findings do seem to line up with previous research on food packaging and our enjoyment of the food inside; I’d argue, though, that it goes hand in hand with a few other recent studies that found we enjoy wine more when we think it’s expensive. In 2015, a study published in the Journal Of Marketing Research discovered that most of us can’t really tell the difference between a cheap wine and an expensive one when we taste them blind; however, if we’re told a wine is more expensive, then we tend to like it more — even if the “expensive” wine is literally the exact same cheap wine we just tasted five minutes ago. This study found that people who are more susceptible to this placebo effect (because that’s exactly what it is) have greater volume in the areas of the brain associated with reward-seeking behavior. Then, in 2017, a different study published in Scientific Reports identified the specific areas of the brain that light up when we’re told something is more expensive: The anterior prefrontal cortex, which both helps us integrate new information with our long-term memories and comes into play when we’re experiencing the placebo effect for pain and anxiety medications, and the ventral striatum, which functions as our reward and motivation center.

What wine and chocolate have in common is that they’re both typically thought of as indulgences or luxuries — we don’t need them to survive the same way we need, say, water and vegetables, but as a sometimes-treat, they bring a great deal of enjoyment to us. So, even though the wine study didn’t specifically examine packaging or labels, I’d be curious to find out whether the same areas of the brain fire when we’re considering things like chocolate packaging compared with taste as they do when we’re considering relative “cost” of wine compared with taste.

It’s food for thought, in any event — literally. To read the full study, head to Heliyon’s website.