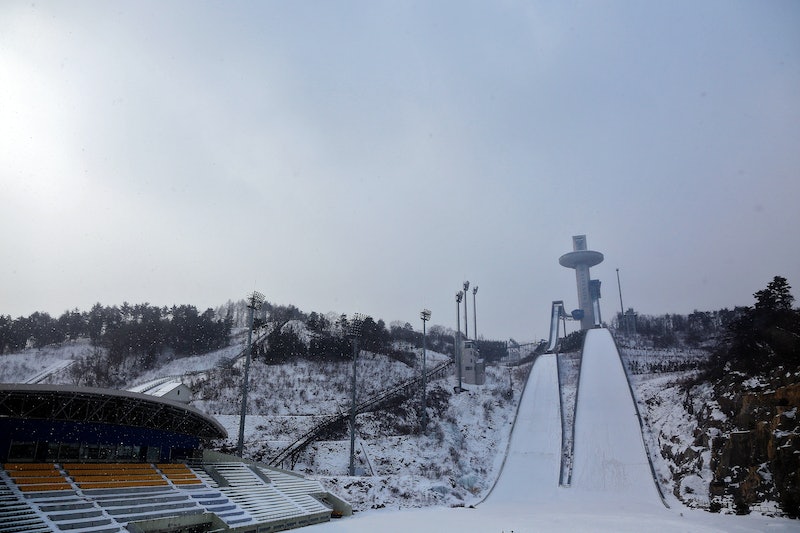 The 2018 Winter Olympic games have already begun — days before the Opening Ceremony even took place. And as such, competitors and fans alike are getting a first-hand answer to a pretty important question: how cold will PyeongChang get for these Winter Olympics, and thus, how unbelievably cold is everyone going to be?

The answer, simply put, is very, very, very cold. According to USA Today, the expected low temperatures could make this the coldest Olympics in more than 20 years, rivaling the frigid temperatures of the 1994 games in Lillehammer, Norway. According to AccuWeather, this is just the way it is in PyeongChang ― in fact, it's supposedly the coldest spot in the entire world for its latitude.

On Tuesday, the high temperature for the day reportedly topped out at just 11 degrees Fahrenheit. On Friday, it's expected that the opening ceremony could be held in temperatures south of 30 degrees Fahrentheit. In simple terms, these are frosty and terribly cold conditions, and that's going to have an impact both on the athletes competing in the games and the spectators who've arrived in PyeongChang to watch them.

There have already, for example, been reports of the snow being so cold that it's having an adverse effect on the skiing teams, forcing them to actually throw their skis away after training runs. The problem, according to Reuters, is that the freezing snow warps the shape of the skis, rendering them useless.

Furthermore, as NPR details, the temperatures are so cold that people's smartphone batteries may also pay the price. In such cold, charged phone batteries will reportedly drain in a matter of minutes unless kept in a warm, well-insulated space. It's not so surprising that it's going to be cold at the Winter Olympics ― to some extent, that's the name of the game ― but this is a level of cold that wasn't experienced during the Sochi games in 2014.

To the contrary, the 2014 games in Sochi were the warmest Winter Olympics on record — not exactly a desired feat. At the time, there were even stories about skiers taking off on jumps and landing in puddles. Suffice to say, there will be no such problems this time around, even though the icy temperatures may bring about entirely other issues.

If you're looking forward to all the drama and excitement of the 2018 Winter Olympics, then it's probably thrilling to not have to wait anymore. Although the opening ceremony won't take place until early Friday morning ― and it'll be broadcast on NBC during primetime Friday evening, starting at 8:00 p.m. EST ― there are already events going on at this very moment.

On Wednesday, athletes were scheduled to compete in three different disciplines: ski jumping, biathlon, and luge. Thursday saw the alpine skiing and curling events get rolling, and on Friday, the hours-long Opening Ceremony, complete with the Parade of Nations, will be going down. That'll be followed up on Saturday with the first trio of medal ceremonies, for the cross country skiing, short track speed skating, and biathlon events. In other words, Saturday will be the first day the medal counts get updated.

There will, by all accounts, be a staggering 92 nations participating in this year's games, some of them from countries where sub-zero temperatures and freezing wind chills are virtually non-existent. Hopefully they're able to steel themselves for just how different it's going to feel in PyeongChang for the next few weeks, because you only get one shot at Olympic gold every four years. And it would be tragic if the unusually cold conditions messed things up for anyone.