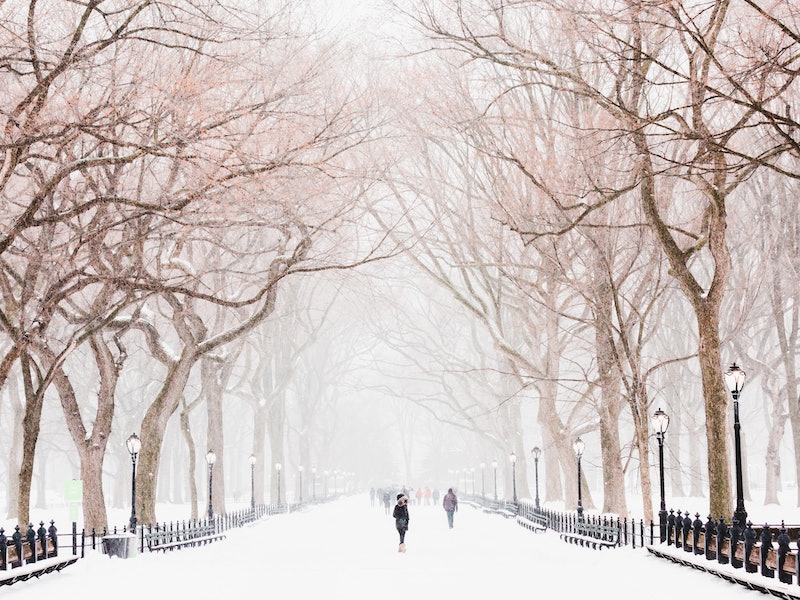 Enjoy the sweater weather while it lasts. Winter is on its way, and meteorologists have warned that it is going to be particularly miserable this year. Technically, the first day of the season is still more than two months away, so it's a little early to tell exactly how cold winter will be in 2017. But judging from the forecasts so far, things might quickly go from "winter wonderland" to "desolate arctic tundra" before the season is over, especially for residents of the Midwest. Is anyone else suddenly longing for summer?

Meteorology company AccuWeather released its predictions for the winter of 2017-2018 on Sunday, and after you read the forecast, you might want to start unearthing the coats and scarves from the back of your closet. According to their analysis, the Northeast and mid-Atlantic will have a "chilly winter" compared to last year, with low temperatures bringing above-average snowfall. Snowfall in areas around the I-95 corridor should hover within a few inches of average, but New York and Boston are expected to see around six inches of snow above normal. AccuWeather also warns that cities near the Great Lakes, like Buffalo, New York, and Erie, Pennsylvania, may experience extra snowfall as well.

"I think this year is going to bring a good ski season in the Northeast,” said AccuWeather meteorologist Paul Pastelok. “And around the holidays we should have some snow for the interior Northeast."

But all this pales in comparison to the northern Plains, where temperatures are expected to drop drastically. Although this winter will be much drier than last year's, Pastelok expects temperatures to drop consistently below zero, and the Dakotas might even reach negative 30 degrees Fahrenheit.

Meanwhile, what's expected to be a weak La Niña — the meteorological phenomenon associated with cool ocean surface temperatures — may dump snow on the Rockies and Northwest. But there is good news on at least one front: Pastelok expects the Southeast to have a warmer winter than usual, and California and the Southwest should have a mild, relatively dry season.

It's worth noting that these predictions all come from one publication, and the season is still several months away. But The Old Farmer's Almanac, which has been published each September since 1792, has also written that this winter will probably be a chilly one. According to the Almanac, the 2017-18 season is expected to be colder and wetter than last year's, especially in the East and Midwest. That being said, last winter was unseasonably warm in much of the eastern United States, so this doesn't necessarily mean the 2017 season will be one for the history books.

When it comes to the Southeast, AccuWeather and the Almanac disagree with each other. Rather than a warm winter, the Almanac predicts the area will experience an "unseasonable chill," with more precipitation than normal. In other words, even the South might end up cold, wet, and presumably miserable this winter — we'll have to wait and see.

Despite the development of several major ice storms in the Northeast and upper Midwest, last winter was far milder than usual in many parts of the country. In fact, numerous areas reported that their season was one of the top 10 warmest on record, with Houston, Texas, experiencing the hottest winter in the city's history. In July, NASA announced that the first six calendar months of 2017 were the second-warmest on record, behind only 2016. Thanks, climate change!

If the current meteorological predictions are any indication, though, all this warm weather may soon come to an end for a few months, and that's not necessarily the worst thing in the world. Think about all the epic snowball fights you'll have — provided it's not too cold to go outside in the first place.