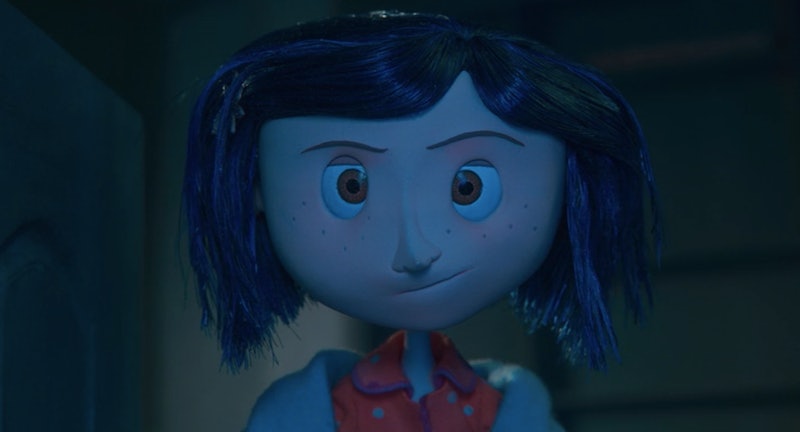 When you think of the term "ladylike," there are a few other descriptors that may come to mind. "Submissive," "quiet," and "well-behaved" — all of these words speak to the prescribed, reserved demeanor that has long prevented women from acting on their instincts. Ladylike isn't brave. It isn't curious. It isn't persevering. But Coraline Jones is all of those things — and that's what makes the movie Coraline a crucial emblem of girl power and resilience. It's already been 10 years since the eerie, yet powerful stop-motion film written and directed by Henry Selick and adapted from Neil Gaiman's story hit theaters, but the message of strength it communicates to its viewers — young and old — deserves to live on forever.

Upon moving into her family's new Oregon home, Coraline (voiced by Dakota Fanning), the self-proclaimed water witch, wastes no time before embarking on a property exploration. She wanders through their Victorian triplex, and becoming bored of counting leaky windows and smashing bugs with her bare hands, she takes the lot — dowsing rod in hand. Never mind that it's actually a branch of poison oak.

She's an only child and an independent adventurer, and she's OK with that — which explains her offended snarl when approached by the neighbor boy, Wybie, and his feline friend. "I don't like being stalked," she snaps. "Not by psycho nerds or their cats." When he tries to call her "Caroline," she promptly corrects him. He shrugs. "I heard an ordinary name like Caroline can lead people to have ordinary expectations about a person," he says. And Coraline is not ordinary by any means, that's for sure.

On its surface, her story seems to reflect the basic trope that "the grass is always greener on the other side" — that Coraline thinks others have it better, but they actually don't. She's bored with a family life that consists of two author parents permanently hunched over computers, bland vegetable dinners, and a lack of attention. She asks why her mother doesn't cook and wishes for a more traditional family dynamic. ("Your dad cooks, I clean," her mother answers.) To distract herself, Coraline gets creative. With the help of her new doll, she discovers a mystery door downstairs, and on the other side of it is a parallel universe. There, her mother adores her, her father works, and there's always fresh food on the table. She ascends the stairs to discover a pinker, frillier bedroom. Upon first glance, it's wonderful. But through button eyes, it's Coraline's worst nightmare.

In a sense, yes, the film's lesson does reflect the aforementioned idiom. But in this case, Coraline realizes quickly that she doesn't want what she wished for — a housewife for a mother, colorful meals, a doting father — and she promptly decides to kick those conventional gender roles to the curb.

In doing so, she has to outsmart the villainous "Other Mother" to save her real parents and liberate the ghost children who weren't lucky enough to escape the beldam's spidery claws. "Be strong, Coraline," she tells herself before diving into her heroine's mission, in which she snips herself from an entrapment of malevolent vines, outlives the "Other Father," and treks the length of the garden to find the ghost children's missing eyes.

Her story is one of both personal and world discovery. Through it, she gains confidence, realizes her mistakes, and takes initiative to make things right. She invites challenges and accepts consequences, and ultimately, she embraces her unconventional circumstances with open arms.

She's a young girl who becomes a feminist champion by simply being herself — curious, determined, and fearless. Throughout the entire film, she progressively defies expectations (or lack thereof) often placed on people like her: young and female. Instead of cowering under the covers, she follows the noise downstairs. She doesn't need a companion, although the film gives her one for entertainment purposes. Some have argued that the original novella written by Neil Gaiman is comparatively more empowering, as Coraline triumphs alone. But compared to other films made for and centering children, Coraline is the opposite of ladylike. It — and she — are badass.