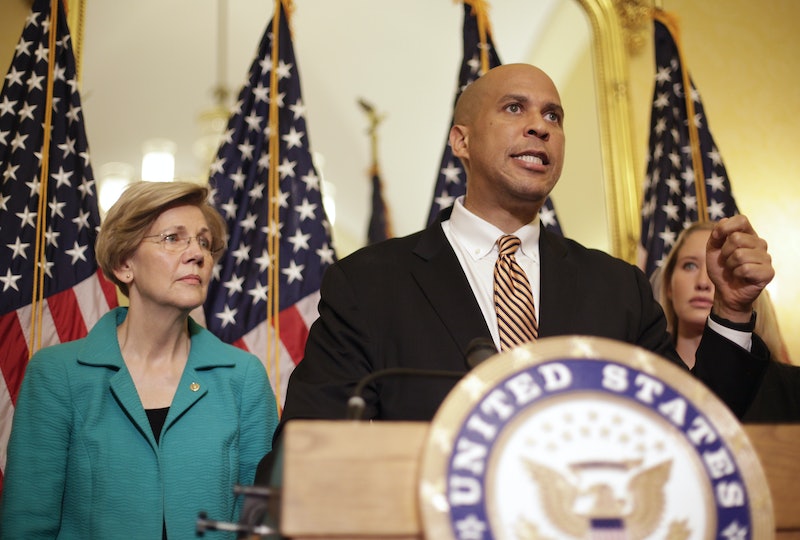 A pair of progressive heavy-hitters is taking aim at an issue they say is keeping workers from earning a fair salary — especially women who perpetually struggle to earn as much as their male peers. Sens. Cory Booker and Elizabeth Warren issued a letter Thursday to the heads of the Justice Department (DOJ) and the Federal Trade Commission (FTC) that makes the case for workers to be given access to more information about what their co-workers or colleagues at other companies earn. They say it's a crucial step that will level the playing field for negotiating a fair salary.

Currently, many workers are barred from knowing how much their colleagues make. Around half of workers surveyed by the Institute for Women's Policy Research in 2011 said that talk of wage and salary information was either discouraged or prohibited at their workplace and could lead to punishment. Booker and Warren say that gives employers "a crucial advantage."

"This lack of pay transparency makes it harder for workers to negotiate for higher wages," the senators say in the letter. "It is also a significant contributing factor in perpetuating gender and racial pay gaps, because it is harder for workers to find out they are being underpaid in the first place."

Ben Harris, the former chief economist and economic adviser to Vice President Biden and a visiting associate professor at Northwestern's Kellogg School of Management, has been in touch with senate staff about government polices that regulate how employers share data. He tells Bustle that policies that obscure wage information perpetuate the gender wage gap.

"It's really hard to negotiate up without being armed with the right information," Harris says. "If you're a female worker and you see that all of your male colleagues are being paid more, it's a lot easier to march into your boss's office and ask for pay equality if you have that information. If you're just guessing at what people are being paid, that's a really hard case to make."

Employers frequently hire a third party to produce compensation surveys, which in turn help them determine how much to offer their own workers. This kind of information-sharing among employers gets the greenlight from the federal government via a policy known as the antitrust "safety zone," which was put in place by the DOJ and FTC in 1996. The policy was originally intended to allow health care providers to share information among themselves, but it's expanded to other industries over the last two decades.

The problem with that policy, the senators say, is that while employers can adjust the salaries they offer employees to keep up with the competition, they also have the opportunity to work with their own competitors to keep wages down across the board. The original "safety zone" policy pointed out this possibility of collusion, which could result in lower worker pay, decreased competition, higher-priced goods and lower-quality services.

While the "safety zone" policy intends to balance the rights of employers and employees, Booker and Warren say that in practice, it's given employers a major assist while holding back workers as they negotiate for better pay and benefits. This "information imbalance" is at the core of their argument.

"Workers have just as much of an interest in ensuring they receive competitive pay that reflects the economic value of their contribution," the senators write. "And yet workers typically have access only to high-level and/or unreliable public data," like that available on self-reported websites, or on the Bureau of Labor Statistics website, which often shows a national average wage rather than the going rate for a job in a particular city or region.

Even if prospective employees are able to research an average wage, they're often unable to account for the effect their own seniority, education, or skill level would have on their salary.

"Because workers are kept in the dark about their compensation relative to others' with similar experience and abilities, they are unable to negotiate effectively for the wages and benefits that are commensurate with their value to the firm," the senators write.

Booker and Warren are pressing the agencies to detail a plan to address the risks of information-sharing among employers when it comes to compensation, and to say whether they would be open to forcing companies to make compensation surveys available to employees. The senators argue that updating the "safety zone" guidance in this way would "empower workers."

"It would enable workers who see they are underpaid to seek higher wages, at their current employer or at another one," the senators write. "We urge you to use all available tools within your authority to facilitate greater pay transparency so that workers and employers can negotiate wages on a more level playing field."