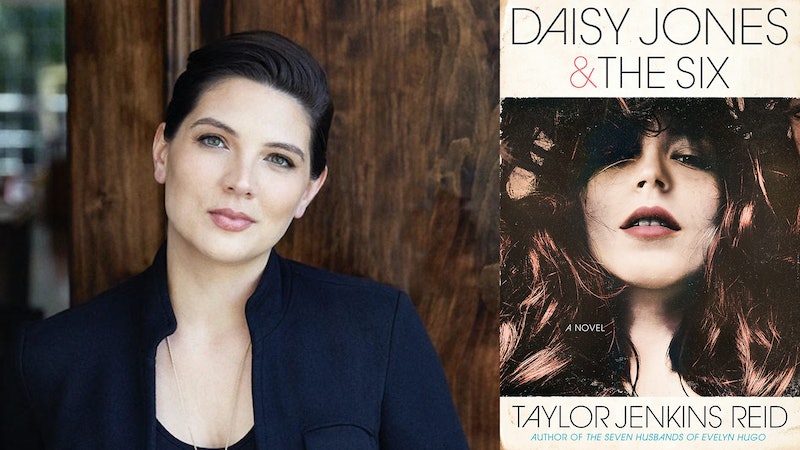 Our interview, like most, starts with an anecdote. Bestselling author Taylor Jenkins Reid brings me back to season 14, episode 3 of Keeping Up with the Kardashians. Our heroine Kim is dressed in a body-hugging Vivienne Westwood gown and is on her way to the 2017 Met Gala.

"But she can’t sit down in the car, so she’s half laying down and has her makeup artist and stylist controlling her body," Jenkins Reid tells Bustle. “You think the Met Gala is going to be this incredibly glamorous event, but what you actually have to do is lay awkwardly in a van, trying to make sure there’s not a stitch out of place. That’s the huge difference between what it looks like to us in photos and how these people actually live.”

It’s through her writing that Jenkins Reid works to bridge that gap, taking readers behind-the-scenes of celebrity to demonstrate that just because something looks great doesn’t mean it feels that way too. In 2017’s The Seven Husbands of Evelyn Hugo, she explored the heartache behind the glamour of a '60s Hollywood starlet. And now, in her latest, Daisy Jones & the Six, she tells the whirlwind rise — and fall — of the titular fictional '70s rock group. (Amazon has already ordered a 13-episode limited series, executive produced by Reese Witherspoon.)

"You think the Met Gala is going to be this incredibly glamorous event, but what you actually have to do is lay awkwardly in a van, trying to make sure there’s not a stitch out of place."

"I actually thought I was done writing about famous people," she says. "I thought I was going to write just one book about an actress and that would be it." But after returning to work following her three-month maternity leave, she realized she just could not shake the idea of creatives working and living in the spotlight.

“I knew I wanted to write something about people collaborating and I liked the idea of it being singers similar to The Civil Wars, a band I was listening to a lot,” Jenkins Reid says. “They were a man and a woman who were incredibly in sync musically but not romantically involved. At least, that’s what it seemed like from the outside. Then, they randomly broke up and never talked about why. I was so intrigued, and thought, ‘Can I do my own version of The Civil Wars?’”

The answer is a resounding yes. Her free-spirited, L.A. it-girl Daisy Jones teams up with The Six, a promising rock band led by the brooding, Canadian-tuxedo enthusiast Billy Dunne, to help with their second album. While Daisy pops every pill she can get her hands on, Billy is a recovering addict, trying to stay sober for his wife and kids. The two butt heads, fight for power, and secretly lust for one another. It’s that tension that helps make the group an international success – and what destroys them at the height of their popularity.

Inspired by VH1’s Behind the Music series, Jenkins Reid shares the band’s untold story through an oral history, gathering interviews, emails and, yes, even lyrics to piece together their mysterious history. “I want it to feel like it’s nonfiction,” she tells Bustle. “I want you feel like you’re lost in a story from our culture that you just haven’t absorbed yet. I thought the best way to consume that is by feeling like you’re hearing from a chorus of people.”

While accounts differ — Daisy says one thing, Billy has a completely different recollection — it’s their songs that speak to how they really felt at the time. And, Jenkins Reid made a point not only to weave these lyrics throughout, but also include the complete album, Aurora, in the back of the book. “Songs communicate what’s in your heart,” she explains of her first time writing music. “The lyrics are filtered through Billy’s voice, through Daisy’s. It mattered to me to give that access to the reader. I definitely felt out of my comfort zone pretending to be a rock star, but it was one of the most fun things I’ve done in a really long time.”

"I want you feel like you’re lost in a story from our culture that you just haven’t absorbed yet."

After all, born in the '80s, Jenkins Reid is admittedly no expert on rock and roll’s heyday. She poured over Vanity Fair oral histories, marathon-watched Behind the Music, and listened to Fleetwood Mac, the Eagles, Joni Mitchell and Crosby, Stills & Nash on loop. “I wasn’t sure I was the right person to write this, so I needed to figure out my angle. Why does it need to be me?” she says. “What I figured out is that I wanted to write the story about rock and roll but really it would be a story about love, family, and responsibility.”

Her characters may be the world’s most famous musicians, but their behind-the-scenes struggles make them utterly human. They fake their confidence, grapple with not being enough and fight to be taken seriously. “When I’m writing, I always come back to the idea that there are so many different ways to be,” she explains. “I write with the intention of making people feel less alone, to feel understood and maybe find something about themselves they didn’t know before. My favorite books are the ones that do that. I hold that book to my chest and after I'm done, I gingerly place it on a shelf, feeling better when I look up and remember it’s there.”

Today, through her own female leads — Daisy, best friend Simone, keyboardist Karen, and Billy’s wife Camila — Jenkins Reid hopes to pass that empowerment on to her two-and-a-half-year-old daughter, Lilah.

“All the women in this story have an ability to assert themselves and control the narrative in a way I’m really proud of,” she says. “I don’t want to uphold the status quo. With Daisy, I didn’t want her sexuality to be determined by other people. We’ve seen that. I want a rock star who is 100 percent proud of her body and I want my daughter to live in a world where these stories exist. I don't know what kind of person she is going to grow up to be, but I want her to live in a world in which there’s a way to be a Camila, a Simone, a Karen, or a Daisy Jones.”