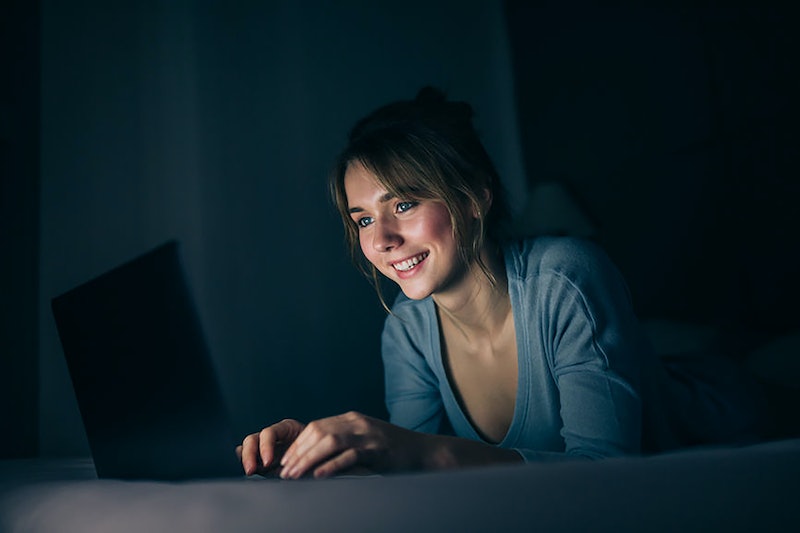 It’s midnight, I'm just setting my book down to go to sleep, and I reach out to my phone to "check I have set my alarm." I already know I have. There has never been a night that I have forgotten to, but this is the little lie I tell myself so I don’t feel so awful for scrolling down Twitter for ten minutes. Once I finally try to sleep I'm wide awake again. You hear a lot is bad for you when it comes to your phone but how damaging is blue light? Many of us take our phones everywhere with us; from our desks, to the loo, and to bed. Is it as harmful as you'd probably like to believe or could your night-time scrolling sesh have serious health consequences?

According to Harvard Health Letter blue wavelengths are used in items like your phone and your laptop as they are extra beneficial in day light hours as they “boost attention, reaction times, and mood.” That all sounds great to me. However, it is reported that these benefits are flipped at night. Whilst you may want to stay energised and on the ball looking typing out a report at work, when you’re winding down watching Gossip Girl in bed you don’t need to be so awake.

A study looking into how disruption of sleep affected 91,105 participants found that those with disturbed sleep patterns were more likely to suffer with certain mental illnesses. The results were published in The Lancet Psychiatry and one of the authors, Professor Daniel Smith identified in The Guardian, those with “very poor sleep hygiene – people on their mobile phones at midnight checking Facebook or getting up to make a cup of tea in the middle of the night” were worse affected.

Similarly, chief of the Division of Sleep and Circadian Disorders at Brigham and Women’s Hospital in Boston, Charles Czeisler told WebMD, “the more research we do, the more evidence we have that excess artificial light at night can have a profound, deleterious effect on many aspects of human health.” So, if blue light has a profound effect on our sleeping patterns is it doing anything else to our bodies?

Well some research would suggest that blue light isn’t just bad news for your sleeping pattern. Research conducted at the University of Toledo found that blue light could also be damaging for your eyes. The findings, published in Scientific Reports, highlighted that blue light used in laptops and phones could kill cells in your eyes. The U.S. National Toxicology Program also linked exposure to artificial light at night to weight gain, depression, cancer, and heart disease. It looks like checking my emails in the middle of the night absolutely is not worth it and isn’t as harmless as I thought.

In 2017 the NHS reported that hospital attendances in England for children under 14 with sleep disorders have tripled in 10 years. Prescriptions for the common sleep medication, melatonin have risen ten fold for children and adults under the age of 55 during the same time period. Whilst clear cut links between blue light and diseases are tenuous there are definitely help implications to sleep deprivation.

I often laugh with friends about how tired we all are with the butt of the joke being no one gets 8 hours sleep do they? Only they do and a lack of sleep has been linked to mental health issues, obesity, and low immunity (to name a few problems.) Whilst a midnight scroll through twitter feels completely harmless at the time, you might be doing more damage to your sleep pattern and health than you first thought. I know I have been told.