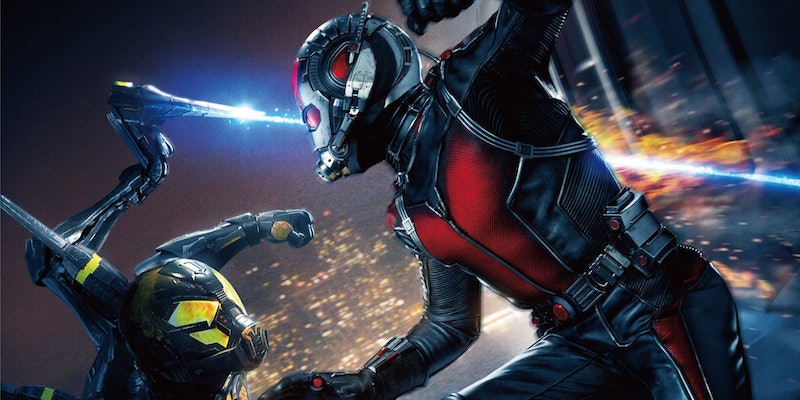 Major spoilers ahead for Ant-Man and The Wasp. The latest addition in the Marvel Cinematic Universe focuses on one of the franchise's most fun characters: Paul Rudd's Ant-Man. And thankfully, Ant-Man and The Wasp also devotes a shared title credit and a lot of storyline to his counterpart The Wasp, played by Evangeline Lilly. Much of the new movie revolves around saving the original Wasp, Janet van Dyne (Michelle Pfeiffer), from the Quantum Realm, a place where Ant-Man was briefly trapped in the first movie. But just how did Ant-Man escape the Quantum Realm?

Back in Ant-Man, Hank Pym (Michael Douglas) warned Scott not to mess with his regulator, the system that prevents him from getting too small. When Scott asked why that would be a big deal, Hank explained that he would then enter the Quantum Realm. "It means that you would enter a reality where all concepts of time and space become irrelevant as you shrink for all eternity," he said. But the only way for Scott to save his daughter Cassie from Yellowjacket was to go small... really small. He had to so sub-atomic in order to sabotage Yellowjacket's bomb, and that's when he kept getting sucked further and further into the Quantum Realm.

So how did he manage to escape? Well, in addition to inventing shrinking technology, Hank had also invented growing technology. Though the super-sizing tech wasn't reliably functional, and we didn't really see it in action until a giant Ant-Man joined the action in Civil War, Scott still put some of Hank's inventions to use when he was trapped in the Quantum Realm. Hank invented red Pym Particle discs for shrinking and blue ones for growing. So, Scott didn't exactly listen to Hank when he was told not to mess with his regulator, and while inside the quantum realm he swapped his normal regulator out for a blue disc, allowing him to grow back to normal size.

Scott's return allowed Hank to start thinking about how, 30 years prior, he had lost his wife Janet van Dyne, the original Wasp, to the Quantum Realm. If Scott could survive, maybe Janet was still alive too, trapped somewhere in the Quantum Realm. So Janet's rescue becomes the main goal in Ant-Man and The Wasp, with this sequel movie happening outside of the events of other MCU flicks like Infinity War and Black Panther. But Ant-Man and The Wasp isn't totally separate from those movies, either. In fact, the new movie's closing credits scene directly relates to the events of Infinity War and offers a suggestion as to how the Avengers might prevail and undo the mass-death snap done by Thanos.

Surprising probably no one, Scott finds himself trapped in the Quantum Realm again at the end of Ant-Man and The Wasp. During the closing credits scene, Scott, Hope, Hank, and a rescued Janet are hard at work harnessing energy from the realm for new experiments. When their audio cuts out, and he can't communicate with them anymore, the scene flashes back to their rooftop lab, only to reveal the black dust that many of the other characters disintegrated into at the end of Infinity War.

Since Scott was inside the Quantum Realm when Hope, Janet, and Hank were dusted, it's possible that the QR acts as a sort of barrier to the Infinity gauntlet, and might be the key to saving people from Thanos. But since Scott is trapped there, he has to figure out a way of getting out. Hopefully, he's packed some of those blue Pym discs, but the new machine and regulators didn't look like they used those anymore.