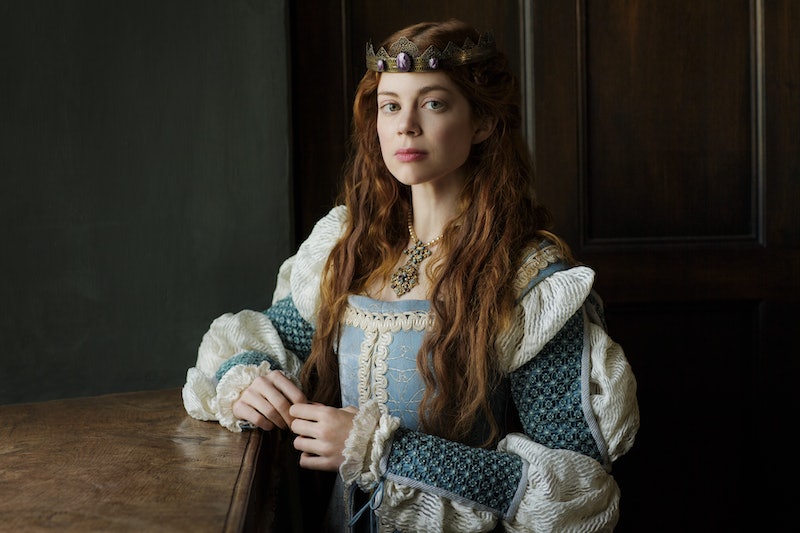 Courtesy of Starz
By Rebecca Patton
May 5, 2019

While period dramas are as mainstream as superhero movies these days, there are a few shows that stick out from the pack. Since Outlander was such a runaway success, Starz has thrown its hat into the ring once again for its newest drama, The Spanish Princess, premiering Sunday, May 5. And since The Spanish Princess is based on historical events, it's only natural to wonder how Catherine of Aragon died. Her eventual husband, King Henry VIII, had a penchant for chopping his wives' heads off, after all.

However, the Starz show picks up way before their eventual divorce or even marriage. In fact, fans may not know that the Spanish princess (who's played by Charlotte Hope in the upcoming series) came to England to marry Prince Arthur (Angus Imrie), which she did in 1501, per Biography.com. The Spanish royal was the youngest daughter of King Ferdinand II of Aragon and Queen Isabella of Castile, per her bio, and after Arthur died in 1502, she became betrothed to his younger brother — Henry Tudor.

The two were married in 1509; however, Catherine had a series of miscarriages and stillbirths, per the Oxford Dictionary of National Biography, and was unable to produce a healthy male heir (one boy, Henry, lasted almost two months before dying). The queen eventually gave birth to Princess Mary (who would be later known as Bloody Mary, due to her violent reign) on February 18, 1516, according to the same report. But since Catherine proved unable to provide King Henry with a son, he decided to divorce her in 1527, per Biography.com.

The only problem, however, was that divorce was not allowed by the Catholic church, and Henry spent the next several years trying to convince Pope Clement VII that their marriage was invalid and could thus be annulled, per History.com. In 1533, he finally broke ties with the Catholic church, and Thomas Cranmer, the archbishop of Canterbury, annulled Henry and Catherine's marriage, according to Biography.com.

Even more scandalous, History.com detailed that Henry had already married Ann Boleyn in January of that year. However, Boleyn also proved unable to produce a male heir and would instead give birth to Princess Elizabeth (who would go on to be Queen Elizabeth I), before the king beheaded her on May 19, 1536 for infidelity, among other charges, per the same report.

So what happened to Catherine of Aragon after the King unceremoniously tossed her aside? Fortunately, she didn't suffer the same fate as Anne Boleyn (or Catherine Howard, for that matter). Even before their annulment was recognized, Henry had banished her in July 1531 to The More in Hertfordshire, according to the Oxford Dictionary of National Biography. This was also the last time she saw her daughter, Mary, who remained at Windsor Castle.

She eventually moved to Buckden, then Kimbolton — both located in Huntingdonshire, per Oxford, and still demanded that her diminished household refer to her as queen. And although Catherine's life had been a somewhat tragic one, she appeared to die peacefully on January 7, 1536 at the age of 50, per Biography.com. That said, her cause of death is up for dispute. Oxford detailed that the chandler who embalmed the queen's body reported that her heart was entirely black, which could point to melanotic carcinoma (or heart cancer); however, her physician believed Catherine had been slowly poisoned.

Whatever the case, Catherine of Aragon was buried in Peterborough Abbey later that month, per the article. So whether the Spanish princess was murdered or died of natural causes, we may never know, but it will be fascinating to revisit her life, marriages, and surprisingly long life in the upcoming Starz series.