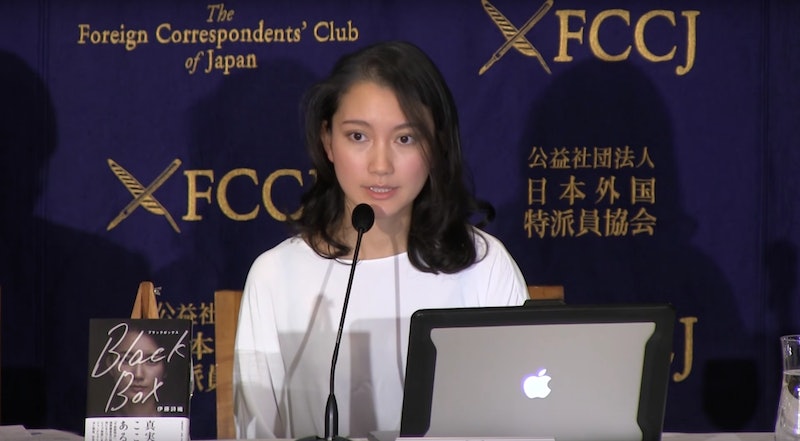 The United States is just one of many countries grappling with sexual misconduct allegations right now. A #MeToo movement in Japan is burgeoning, albeit quietly. In a country that reportedly discourages victims from sharing their harassment and assault stories even more adamantly than the United States, a few Japanese voices have recently planted small but powerful seeds of change.

It began in May when Shiori Ito, a 28-year-old Japanese journalist, accused a much older and well-established journalist, Noriyuki Yamaguchi, of drugging and raping her in 2015 (he denies this). Investigators first told her that they planned to arrest Yamaguchi but later dropped the charges and wouldn't explain to her why. Some commentators thought the reversal was suspicious: Both Yamaguchi and the police chief who ended the investigation are reportedly close friends of Japanese Prime Minister Shinzo Abe.

Ito alleges that the assault occurred after she met with Yamaguchi for what she had believed to be a business meeting. They had some drinks at a restaurant, after which she started to feel dizzy and went to the bathroom. She passed out there and reportedly regained consciousness in a hotel room to find Yamaguchi on top of her and allegedly raping her. She escaped the hotel and reported the event to the police — and that immediately makes her case exceptional.

Japan's Justice Ministry estimates that only 18.5 percent of sexual assault victims report the crime. But prosecutor Kazuko Tanaka and author of The Sex Crimes and Child Abuse Investigation Handbook thinks that the real number is much lower: probably around 4 percent. Ito then broke an even more entrenched norm when she spoke out publicly about the alleged rape.

"The backlash hit me hard," she wrote in Politico on Tuesday. "I was vilified on social media and received hate messages and emails and calls from unknown numbers. ... There is a strong social stigma associated with speaking out against sexual assault and a common perception that victims are less valuable to society. This is why many stay silent."

Ito described sexual harassment and assault in Japan as widespread and common. "I grew up in a culture and society where women are exposed to sexism and harassment from a young age," she wrote. "Sexual molestation on public transport is a common problem that society trivializes. In high school, my friends and I faced this on a daily basis."

Ito published a book about her experience in October called Black Box. October was also the month that The New York Times published its bombshell exposé about Harvey Weinstein's decades of allegedly sexually harassing and assaulting women in Hollywood (Weinstein denies all charges of nonconsensual sexual acts). Soon after, Japanese blogger Hachu publicly accused a former coworker of hers of sexual harassment (he admitted partial wrongdoing, apologized, and resigned from his job).

These two stories weren't shared as widely as the Weinstein news, but they were some of the first examples of Japanese women publicly accusing well-known figures of sexual misconduct. And they've encouraged others to follow in their footsteps. Other Japanese writers and journalists have begun speaking out too. Social media analytic company Crimson Hexagon reports that tweets about #MeToo in Japan shot up on Dec. 17, after Hachu published her accusatory post. And there's been a shift in the way that some of the Japanese media, at least, talks about sexual assault. For example, talk show host Makoto Otake, who is a former comedian, responded to the Al Franken accusations with a moment of self-reflection. "Now that I think of it," he said, "maybe I did something like sexual harassment in the past."

Still, it's clear that #MeToo isn't taking hold of Japan with the same strength as the United States. A video from the prominent citizen journalist YouTube account Asian Boss interviewed Japanese pedestrians for their reactions to #MeToo. The interviewer found many who were willing to acknowledge the problem of rampant sexual harassment, but few who felt optimistic about the prospect of women deciding to speak out in the future. "Japanese women don't really express their opinions much," one woman said. "When it comes to a movement like this, I don't think Japanese women would actively engage in it."

But earlier this year, before #MeToo started sweeping the world, some women's rights protests in Japan may have helped fertilize the ground for this recent progress. The day before Washington, D.C.'s Jan. 21 Women's March, 650 people showed up to a sister march in Tokyo. That protest wasn't necessarily representative of a homegrown feminist movement, though, because it was mostly attended by expats and organized by a foreigner. More telling was the Mar. 8 march in honor of International Women's Day in Tokyo, which was attended by around 300 mostly Japanese people. That protest tried to draw attention, in part, to domestic violence and sexual harassment.

Ito and Hachu are far from the first to speak out about sexual assault in Japan. But their voices have drawn significant attention to the problem and have encouraged survivors to share their stories. Like the Weinstein scandal in the United States, Japan may have just needed the right catalyst to incite the #MeToo movement. And although it doesn't seem destined to immediately achieve the same widespread activist response that #MeToo has in the United States, there are still signs of progress.

"Japan hasn’t had a big #MeToo movement," Ito wrote in Politico, "but what’s happened in the United States and elsewhere has provided an opening in our media to discuss sexual harassment and assault here, and to raise awareness. ... In private, women’s solidarity groups and others are quietly saying 'me too.' But for now, most can only whisper it."

More like this
6 Organizations Fighting Police Brutality That You Can Support Right Now
By Syeda Khaula Saad and JR Thorpe
How To Help Those Affected By The Turkey-Syria Earthquake
By El Hunt
This Is When Netflix Is Going To Start Charging You For Sharing Passwords
By Darshita Goyal
24 History-Making Black Women You Probably Didn't Learn About In School
By Ayana Lage and JR Thorpe
Get Even More From Bustle — Sign Up For The Newsletter
From hair trends to relationship advice, our daily newsletter has everything you need to sound like a person who’s on TikTok, even if you aren’t.