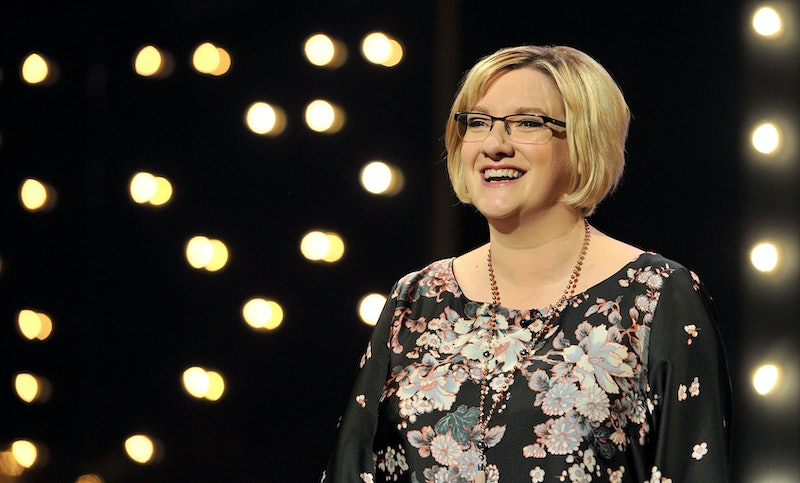 Over the past few years, Sarah Millican has become a household name thanks to have appearances on legendary TV panels shows and, of course, her own brilliant stand up. One of her most beloved stand-up shows is Control Enthusiast, which includes a tons of relatable banter, especially when it comes to her marriage to comedian Gary Delaney. But, the what I want to know is, how did Sarah Millican meet her husband?

During an episode of BBC 4’s Desert Island Discs in 2014, Millican revealed that she met Delaney at her “second ever gig” in 2006. The pair lived apart from each other until 2013 when they finally moved in together and got married. “I moved out of my rented flat that I’d be in for six years and bought a house like an adult,” she told Alan Carr on his chat show. “It’s big stuff, we’ve been together for seven years.”

“I just got sick of taking the bins out,” she joked. “For so long I killed my own spiders and now somebody else kills the spiders.” This comedic flair was apparent during their wedding, which involved the couple walking out of the ceremony to the tune of Paul McCartney’s ‘Frog Chorus’.

“There was a Frank Sinatra song and it was in the order of service of a wedding [comedian Kathy Burke] was at and [she] said everybody just sang with gusto,” Millican explained to BBC Four’s Kirsty Young (via Birmingham Live). “When I married my husband Gary, we were planning our wedding and thinking what we could pick that everybody could sing.”

“He started playing this so I started to laugh,” she continued, “and he said ‘listen to the lyrics’ and I started to cry. So we played this at our wedding and the whole congregation sang including all the noises.”

Millican is known to lay everything bare during her stand-up gigs, and the same goes for interviews regarding previous relationships. In 1997, the comedian married her first husband Andrew Millican, but the couple divorced in 2004. It was this breakup that initially spurred Millican into comedy, after attending “a workshop for aspiring poets before finding her way on to the comedy circuit,” as The Sun reports. “Can you imagine if he hadn’t left me?” she told the newspaper in 2012. “I’d still be in the job I hated, watching telly in a damp flat. I had to go really low to come back up.”

She also started to see a counsellor, which led her to see the funnier side of the breakup. “I wanted to talk about it with someone who could help me fix myself,” she said. “What I didn’t want was to take all this emotional baggage into my next relationship.” Millican added: “She was brilliant and kept telling me that what I’d said was actually really funny, and might make a joke. I was going through this horrible time, but sometimes finding funny things within it.”