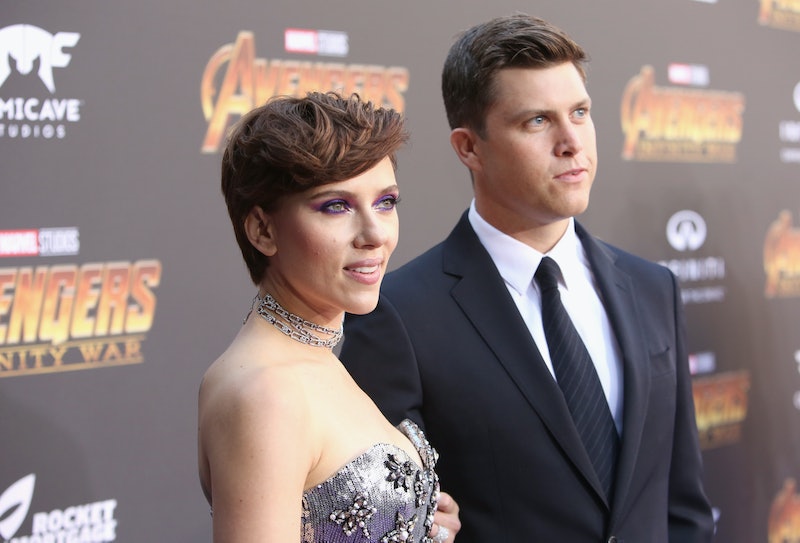 After making their red carpet debut together on April 23 at the Avengers: Infinity War premiere — a move that's essentially known as the celebrity version of publicly "defining the relationship" — fans of the couple may be wondering how Scarlett Johansson and Colin Jost met. As it turns out, the two first crossed paths more than a decade ago, but it wouldn't be until much, much later — May 2017, to be exact — that reports of the pair getting cozy would surface, according to Page Six.

Johansson made a guest appearance on the May 20, 2017 episode of Saturday Night Live, when the actor showed up as Ivanka Trump for host Dwayne Johnson's cold opening. Jost, of course, has been a long-time writer for the sketch comedy show, and currently serves as a co-anchor for the "Weekend Update" segment, alongside Michael Che.

Jost signed on as a writer for SNL back in 2005, and was promoted to "Weekend Update" co-anchor in 2014. Johansson's first appearance on the show — which was also her first time hosting — happened in January 2006. The Avengers: Infinity War actor would go on to host SNL another four times over the next decade, and made two additional guest star cameos before appearing in the show's May 20, 2017 cold open.

Johansson was seemingly involved in back-to-back relationships — including her three-year marriage to Ryan Reynolds — from 2004 through 2011, according to E!. Later that year, she began dating ad executive Nate Naylor, and shortly after she and Naylor split in October 2012, Johansson was spotted with another new beau — creative ad manager Romain Dauriac.

She and Dauriac got married in October 2014, but had decided to separate as early as the summer of 2016, a source told People. On March 7, 2017 — the week before she was set to host SNL for the fifth time on March 11 — Johansson officially filed for divorce from Dauriac.

While Johansson's divorce from Dauriac wasn't finalized until September 2017, after she and Jost were reportedly caught kissing following her May 20 cameo, a source told Entertainment Tonight that it, "wasn't the first time" they'd hooked up. "It's been going on for a bit," the source said. "They're not in a relationship, but they have fun together. They like each other, but it's not exclusive — at least not at this point."

In September 2017, Jost admitted to Entertainment Tonight that that he and Johansson had "kind of known each other" since the actor first hosted SNL in 2006. "She's pretty cool," Jost said. "It's hard to have a lot of complaints, she's pretty awesome."

Of course, Johansson had basically been off the market from the moment they met — however, if Johansson and Dauriac had, in fact, already been separated since the summer of 2016, perhaps Jost finally decided to drop a few hints to the actor post-divorce filing/during rehearsals for her March 11, 2017 hosting gig.

The Avengers star and the "Weekend Update" co-host seemingly kept things kind of casual for a few months in the beginning — Johansson was linked to lawyer Kevin Yorn in June and July — but by November 2017, she and Jost were posing for date-night photos together at the American Museum of Natural History Gala.

On December 17, Johansson reprised her guest-starring during Kevin Hart's monologue on SNL. At the end of the show, the entire cast skated around Rockefeller Center's ice rink while the credits rolled — Johansson and Jost skated around too, and were adorably spotted holding hands as they did so.

The couple made their red carpet debut together at the Los Angeles premiere for Johansson's film, Avengers: Infinity War, on April 23, and pretty much couldn't stop smiling. After so many months of dating rumors, and what sounds like many more years of bad timing and missed opportunities, it's nice to see these long-time friends finally feeling comfortable going red carpet-public with their love.