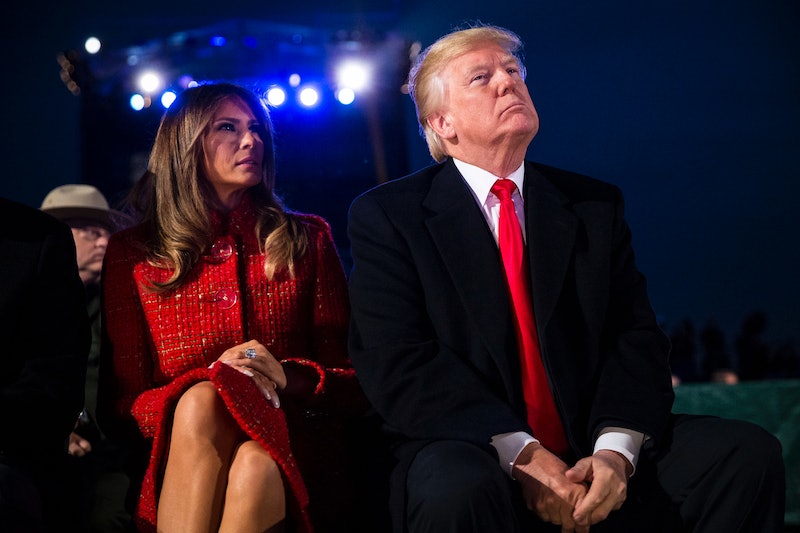 Donald and Melania Trump, like so many others, have a New Year's Eve routine — and it turns out that not even entering the White House can change that. The Trumps spent New Year's Eve at Mar-a-Lago, a lavish tradition that they partake in every year at the Palm Beach resort that the president often refers to as the "winter White House." The first couple rang in the new year surrounded by the adult Trump children and their families, members of Mar-a-Lago and their guests, and even other government officials like Treasury Secretary Steve Mnuchin.

Every year, the Trump New Year's gala is an opulent event, with the guests arriving in the slickest apparel and dining on a menu designed according to the president's favorites. Trump himself donned a tuxedo, and Melania and Ivanka made waves with their stunning, designer dresses.

This is exactly what they've done in previous years, with one small difference: the ticket prices went up significantly in comparison to last year. Ethics officials have raised questions about guests paying the hundreds of dollars that the tickets cost — specifically, $600 for Mar-a-Lago members and $750 for their guests, up from the $525 and $575 ticket prices for last year's celebration, when Trump was the president-elect.

The Trump Organization's external ethics advisor, however, said that he saw no problem with the hike in ticket prices, telling Politico that this was simply a reflection of a better economy. Guests at the Trump event certainly didn't see their dollars go to nothing, as the entertainment included a popular cover band, and various celebrities generally turn up and mingle amongst the guests. It's unclear how much the event cost to put on, but as of the last reports, the event was close to a sell-out — so it was also likely a profitable affair for the president's company.

President Trump also didn't miss the opportunity to send out a series of New Year's tweets. The last day of 2017 was a busy one on Trump's Twitter account, but in addition to commentary on foreign policy matters like Iran and condolences for the family members of law enforcement officers killed in a shooting over the weekend, he also mixed in some more celebratory fare.

He tweeted both a video showing what he saw as the highlights of the past year of his presidency and a holiday greeting to even the "haters" and the "very dishonest Fake News Media." "As our Country rapidly grows stronger and smarter," Trump wrote on Twitter, "I want to wish all of my friends, supporters, enemies, haters, and even the very dishonest Fake News Media, a Happy and Healthy New Year. 2018 will be a great year for America!" He followed this up with a repetition of his campaign theme, writing "HAPPY NEW YEAR! We are MAKING AMERICA GREAT AGAIN, and much faster than anyone thought possible!"

Some of Trump's family members, on the other hand, left politics out of their posts for the night and instead focused on the celebration. Ivanka Trump posted a shot of her family before heading down the red carpet into the gala; her brother Donald Trump, Jr. posted a picture of himself and his father wearing tuxes; and Eric Trump tweeted a picture of Mar-a-Lago's spectacular fireworks show.

The president offered an optimistic message to start out the year, saying that “It will be a fantastic 2018." Early on New Year's Day, Trump posted a tweet saying that he would be heading back to Washington, D.C. to begin the "much work" there is to be done in 2018 — but he'll likely be back to the glitz and glamour of Mar-a-Lago quite soon, if 2017 was any indication.