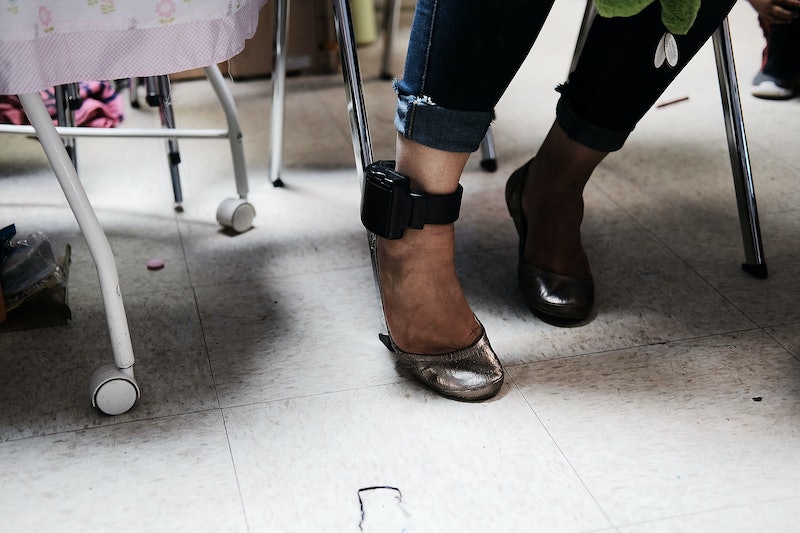 After a couple court orders ruled that the government could not hold thousands of detained migrant families indefinitely, the Trump administration announced it would be releasing some of those families into the United States — but with ankle monitors. Migrant families will have to wear them after being freed, according to The New York Times, and how ankle monitors work is key in understanding how the "catch and release" policy actually functions.

The Trump administration will, as The New York Times reported, go back to a policy advocated by President Obama. The policy known as "catch and release" is a practice in which immigrants apprehended in the United States without proper documents are released to live free as their cases move through the court system. The policy has been denounced by Trump in the past, and it's one that he has promised to slash. This comes as federal officials have been left scrambling to find detention facilities for thousands of migrant adults and children awaiting trial for entering the United States illegally.

“Parents with children under the age of 5 are being reunited with their children and then released and enrolled into an alternative detention program,” said Matthew Albence, executive associate director of ICE’s enforcement and removal programs, according to the New York Times. Albence also said the Trump administration had temporarily stopped referring adult migrants who cross the border illegally with children for prosecution, noting that these migrants would have ankle bracelets strapped on before being “released into the community.”

Ankle monitors are often used in situations requiring house arrest, but the devices are used in other types of legal rulings as well. According to one Florida law firm, ankle monitors are tamper-resistant, electronic devices that are tethered around your ankle. Ankle monitors are expected to be worn at all times. The device uses a radio frequency signal to communicate with a monitoring station, and if the device is tinkered with, damaged, or removed, an alert immediately gets sent to law enforcement officials. Ankle monitors are programmed to allow its wearers the freedom to travel within a certain area, and it may have "GPS monitoring functions that alert the monitoring station if you go outside of the permitted area," according to Proly, LaPorte, and Mulligan, P.A.

But it seems not all migrant families will have the option for "catch and release," according to The LA Times. Trump administration officials said while most parents of children younger than 5 would be released with ankle bracelet monitors rather than stay in family detainment for an indefinite amount of time, they would not say whether the same policy would apply to the parents of children ages 5 to 17, which is a significantly larger group.

Albence said that though the ankle monitors would track the families being released, Immigration and Customs Enforcement (ICE) would still look into other ways to make sure migrants show up for their court dates. According to The New York Times, about 80,000 migrants who are required to don tracking devices currently reside in the United States. These include migrants who were released from detention before the zero-tolerance policy was enacted in April.

A spokeswoman for the Department of Homeland Security described the return to "catch and release" as unfortunate and said that it would serve “as a pull factor for increased future illegal immigration,” according to The New York Times.

During Obama's presidency, Trump harped on the "catch and release" policy, saying that it was the reason behind the crimes committed by undocumented immigrants. But now, the Trump administration finds itself enacting the same policy after struggling to find a solution to the influx of immigrants in detention centers.

More like this
How To Fight For Reproductive Rights, Based On How Much Time You Have
By Courtney Young
5 Ways To Stand In Solidarity With Women In America From The UK
By Sophie McEvoy
The Families Of Grenfell Tower Are Still Waiting For Justice, Five Years On
By Bustle UK
Boris Johnson’s Leadership Is In Question – Again
By Bustle UK
Get Even More From Bustle — Sign Up For The Newsletter