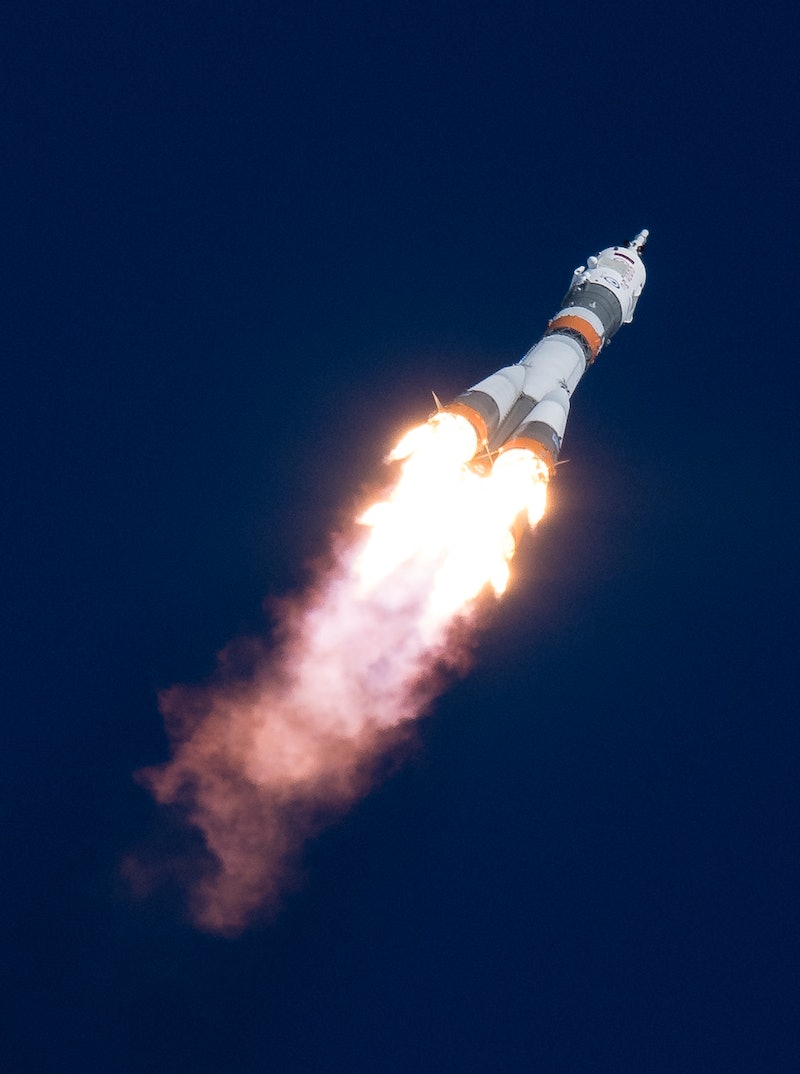 If one of the things you consider before you leave for vacation is where you'll use the bathroom, you may have poop anxiety, or trouble using the bathroom away from home. If so, you definitely don't want to become an astronaut. Business Insider interviewed NASA astronaut Peggy Whitson and she answered a ton of questions about life onboard the International Space Station, but perhaps the most illuminating answer was a question many of us have: How do astronauts go to the bathroom in space? Peeing is relatively easy — after peeing into a funnel, the urine is eventually turned back into drinking water for the astronauts, according to Whitson, which makes logistical sense but is still wince-worthy — but pooping is another story.

According to Whitson, astronauts have to poop into a hole that's roughly the size of a plate. If this sounds relatively easy to you, keep in mind that they don't have gravity on their sides, which means that you are aiming your poop at a chute with a relatively small opening. Granted, astronauts can strap themselves to the space station toilet, but it still isn't easy. Whitson tells Business Insider that "number two... is more challenging because you're trying to hit a pretty small target," she says in the interview.

Here's where things get wild. If the toilet malfunctions, they aren't dealing with an ordinary plumbing issue. Instead, pieces of poop float around the space station. Vox reported that an Apollo 10 mission in 1969 was haunted by what the astronauts called "floating turds." One astronaut even insists that the poop didn't belong to them because their poop was "a little more sticky than that." In case you needed nightmare fuel, here it is.

Even when things are going well, astronauts poop into a vacuum-sealed bag that's released on "space trash days." But if the too many bowel movements take place, astronauts have to use their hands (swathed in rubber gloves) pack down the poop to seal it. It is objectively terrible. Thankfully, once it's over, the poop is burned up with the rest of the International Space Station's trash. But Whitson has spent a cumulative 665 days in space, or about two years, so it wasn't like pooping was a one-time horror for her. She probably got used to it, because what else can you do?

Popular Science has an in-depth guide to pooping in space, and writer Amy Shira Teitel reports that astronauts were once fed "low-residue diets" to reduce the need to poop. And when astronauts are actually on the moon, they had to wear what's an essentially an adult diaper to take care of business. Things got more specific over the years — by the 1970s, NASA was considering pubic hair and the vulva when designing a space toilet that would allow astronauts to urinate without much trouble, Popular Science reports.

Even though NASA has arguably built some of the most sophisticated toilet systems in history, it's still kind of gross to think about having to deal with anti-gravity poop and using your hands to pack down a bag filled with people's feces. Astronaut life isn't known for its glamour — BGR says that the International Space Station is filled with bacteria, and a commitment to an ISS mission means not seeing your loved ones for months on end — but it ensures that the people who actually go into space are in it for the right reasons.

In 100 years, NASA may figure out an ultra-sophisticated solution to the poop problem, but until then, people heading away from Earth will have to deal with some not-so-great amenities. Whitson's reflection on her time in space is overwhelmingly positive, so I suspect it's not much of a dealbreaker.