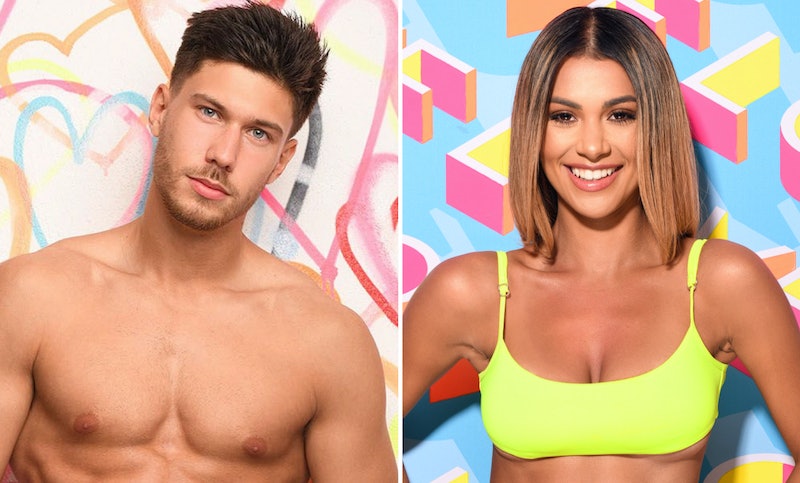 The latest dumping from the Love Island saw Casa Amor's Joanna Chimonides leave the villa after failing to be saved by the public or her fellow Islanders. And while the sh*t really hit the fan when Michael decided not to leave with her, Love Island fans patiently awaited the moment Joanna arrived back in the UK to see how she would respond to the whole thing. Today, the star touched down in Britain, and a surprising guest was waiting for her at the airport: last year's Islander Jack. So, how do Joanna and Jack Fowler know each other?

Let's start from the beginning. Basically, eagle-eyed fans spotted the scene taking place at the airport, in which a beaming Joanna greeted Jack, who was waiting for her, by holding his face and jumping right into his arms. Hmmm, interesting...

The pictures, which were shared on Instagram by clothing brand DLSB, were accompanied by the following caption: "LOVE ISLAND UPDATE Joanna has flown back to the U.K. and had a loved up welcome home from Jack Fowler who was on the show last year. what’s going on here then?!"

Fans swarmed onto the post and left their comments in the dozens, with many saying this is proof the show is fixed.

So how exactly do these two know each other?

I've done a little digging, and it would seem that despite looking verrryy close at the airport, the pair are just friends. Or at least, that's what people are saying on Twitter.

In a response to a tweet suggesting Joanna was "with" Jack, one user replied, saying: "She’s not they are best friends."

After yet more digging, it seems as though the two actually may know one another from being signed to the same agency.

The 'Meet Our Talent' on Webbe Industries page clearly shows that both Jack and Joanna are looked after by said agency, with Joanna referred to as "the first female to join our Webbe Industries family." Joanna's bio also states that she's looking to get into a career in modelling, and ends with: "We can't wait to join Joanna on her crazy, exciting journey as she's catapulted into the entertainment industry."

So, despite the two looking friendly at the airport, and greeting each other in a seemingly loved up way, they really do sound like friends and colleagues.

All of this may have you wondering just what Jack Fowler has been up to since he left the villa last year. His profile on Webbe Industries' page doesn't give much away, but does show he has made several TV appearances in the last year:

"After Love Island came to a close in summer 2018, Jack very quickly rose to popularity due to his infectious personality, grounded nature and his good looks."

"You may have seen from Jack’s time in the villa that he’s full of energy, with a passion for beat boxing, singing and acting – he can even play guitar and the drums too. Appearances include: Channel 4’s The Big Narstie Show, ITV2’s Don’t Hate The Playaz and E4’s Celebs Go Dating."

I wonder what Jack will think of Michael...