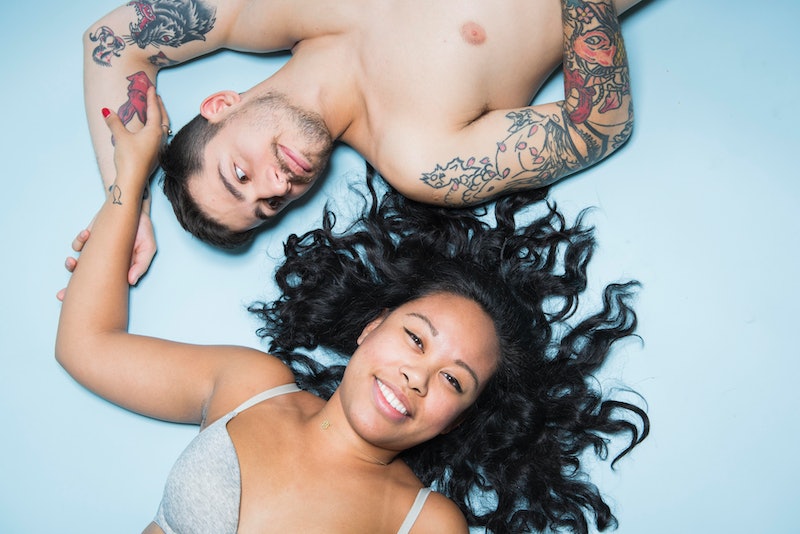 Cats cry when they’re in heat. Baboons’ butts turn bright red when they’re fertile. Cows spend more time standing up and mooing when they’re ready for insemination. But human females don’t have an immediately obvious sign that we’re fertile. There are no red butts or mooing or singing out for partners and, as a result, scientists thought for a long time that humans experience “concealed ovulation.” However, research suggests that there are subtle ways we communicate fertility that we might not even be aware of. One of those ways is through our pheromones.

Human pheromones exist in a weird spot, scientifically. On the one hand, there’s some evidence that they exist — and that they do have an effect on our behavior. For example, one study found that when men smelled women’s tears, their sexual arousal and testosterone levels dropped. On the other hand, scientists have yet to conclusively isolate the one pheromone that perfumeries and would-be Casanovas have been seeking for centuries: The sex pheromone. There is some evidence that sex pheromones exist, but scientists haven’t been able to figure out exactly which ones they are — yet.

“I know very little about pheromones, other than that they exist," Dr. Lauren Streicher, Medical Director of The Northwestern Medicine Center for Menopause and The Northwestern Medicine Center for Sexual Health, tells Bustle. "But in terms of how significant their role is, I don’t know if we have any data on that and it probably varies from person to person.”

Still, research suggests that during ovulation, we’re sending signals that we don’t even know about. In addition to our faces getting slightly redder and our appearance being more attractive to our partners it’s possible that during ovulation and the fertile week that surrounds it, human females are sending out subtle changes in scent.

In one 2004 study, researchers from University of Jyväskylä in Finland and instructed 39 women who weren’t on the pill and 42 who were to wear a previously unworn t-shirt directly against their skin for two days. Then they had 31 men and 12 women smell the shirts and rate which ones they preferred. They found that the men rated the shirts of women who were mid-cycle — at their most fertile — highest, while the women couldn’t make a distinction. They also found that neither gender made a distinction in the shirts from women on the Pill. The researchers hypothesized that was because women on the Pill don’t ovulate and therefore don’t have a hormonal shifts that women who aren’t on the pill experience.

According to the researchers at the menstrual tracking app Clue, there are certain hormones that change the way we smell during ovulation, including steroid hormones from apocrine sweat glands. Because those are “favored regardless of reproductive intention,” — which means they smell good whether or not you’re trying to get pregnant — they could be part of the reason the shirts worn during ovulation were ranked higher. Or, it could be a combination of hormones and those mysterious, yet-to-be-named pheromones. Only time will tell.

In the meantime, there’s no doubt that smell is an important factor for attraction. A 1995 study from Swiss researchers asked men to wear t-shirts against their skin for two consecutive days. The shirts were then given to women, who were asked to rate how pleasant or unpleasant they found the smells. The results were fascinating: The women were more likely to deem the shirts of men who had genetic profiles that were different from their own “pleasant.” Obviously that’s not about how a woman’s cycle affects her pheromones, but it is more evidence that there’s something tangible that we just haven’t quite found yet in our sweat.

So are pheromones real? Do they influence attraction? At this point, the best we can say is that it would appear they do exist and they do affect attraction — but we're not exactly sure which ones they are and their exact effect. We'll just have to wait for the science to move forward on this one.

This article was originally published on Sep. 6, 2017