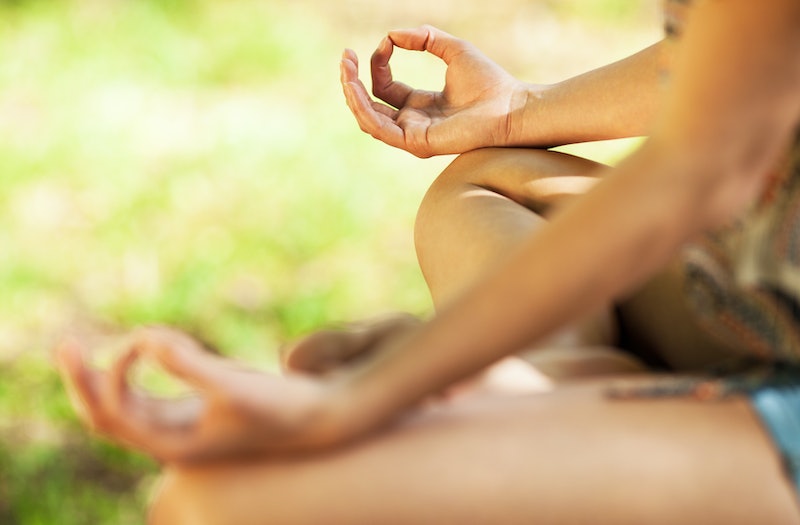 I am not a morning person. I also live somewhere that doesn't recognize Daylight Savings Time, which means each spring when the clocks change, I have to adjust from getting up for work at 8:30 a.m. to getting up for work at 7:30 a.m. Considering my normal sleep schedule involves me going to bed at around 4 or 5 a.m., I knew I had to change my sleep schedule, because, well, no matter how cheerful I am at any other point in the day, in the morning, I hate everything — and I knew I would hate it all even more on just three hours of sleep. I'd been reading that practicing mindfulness or doing yoga in the morning can help you wake up faster in the morning, so this Daylight Savings Time, I challenged myself to do it for a week. What I didn't expect was for the exercise to actually work.

Jamie Price, a wellness expert and co-founder of the app Stop, Breathe & Think, tells Bustle that "feeling stress and getting poor sleep are often closely connected," which likely explains why my sleep schedule is so effed up. I have generalized anxiety disorder that often keeps me up till all hours, but the thing is, sleeping past 9 a.m. — and feeling like I lost a bunch of productivity time — makes me even more stressed. It's a terrible cycle. Luckily, Price says "[m]indfulness meditation can help to relieve stress by activating the body's relaxation response."

The plan: seven days of mindfulness and some light stretching before feeding my pets and myself, then logging on to start work. I'd then reward myself for my extra-early wake-up by using the time it gained me to go out and get coffee instead of making myself a pourover at home. Foolproof, I thought.

Day One was a total wash. I slept through my sunrise alarm, blearily realized I had done so half an hour later, and was too busy being in my hateful wakeup state to care, so I went back to sleep. Zero points for me.

Day Two started off better. I got up, let my dog outside, then plugged myself into a rain playlist on Spotify, and did some easy stretches. It went fine, except when my five-minute alarm went off, I realized that I hadn't really been mindful. Mostly, I'd been thinking about the freelance work I'd done the night before. It wasn't that in order to be mindful I had to think about nothing but my breathing and being in my body — but rather, I hadn't been observing my thoughts as they came, whatever they happened to be, and ended up unconsciously stressing myself out.

Price says it's common to get caught up thinking about things that make us anxious. "Certain mindfulness techniques [...] can pull [you] out of this kind of entanglement by simply noting the thoughts as 'thinking' and coming back to the breath," she explains.

So on Day Three, I tried to do just that. I made a to-do list in my head while I listened to birds chirp and rain fall and stuff, and focused on deep breathing more than stretching. I may have fallen asleep a little while I was stretching my legs, but when I surfaced and still had a half hour until my shift, I have to say I felt pretty focused. And by then, I had started getting into the rhythm of waking up earlier, which meant my body started trying to put me to bed at around 10 or 11 p.m. Suddenly, waking up at 6 a.m. was no big deal. I sailed through the next couple of days, feeling much more productive and focused than usual, Plus, I was resisting the temptation of an afternoon nap with deceptive ease.

But on Day Six, I hit a bump. I woke up from anxiety dreams, which are almost always a precursor to an entire day spent having my anxiety triggered by virtually everything around me: A scratch on my hand meant I was going to get MRSA and die, my dog eating some of my neighbor's birdseed was going to give her heartworm and she'd die, and thinking about filing my taxes was enough to throw me into a full-blown panic attack. But having practiced mindfulness the last few days, I was able to smoothly deal with these feelings with a visualization exercise. Price says that mindfulness can help to manage these thoughts as well: "You’re not trying to reject your anxious thoughts or trying to stop having them altogether. It’s more like stepping onto the bank of a river and simply watching the river of thoughts flow by, as opposed to diving in and trying to reverse the flow."

Another way I cope with anxiety? I nap. For hours upon hours. And even though I'd practiced the visualization that's what I did to round off Day Six, despite knowing it was extremely likely that I'd be celebrating the end of my successful experiment by ruining my sleep schedule again.

But to my surprise, on Day Seven, I woke up before my alarm went off, feeling refreshed and much more in control. I'll admit I forewent stretching. Instead I pulled aside my curtain and laid in bed under my window, breathing and watching the trees sway in the winter breeze, and then got up and went to work.

Now, almost a week after the conclusion of my experiment, I've stayed on a sunrise wakeup schedule. I won't deny that I still feel like there's a certain magic to the middle of the night, when even where I live, so close to a city center, it feels like no one is awake but me. But waking up in the early morning and having those precious couple of hours to myself comes pretty dang close.