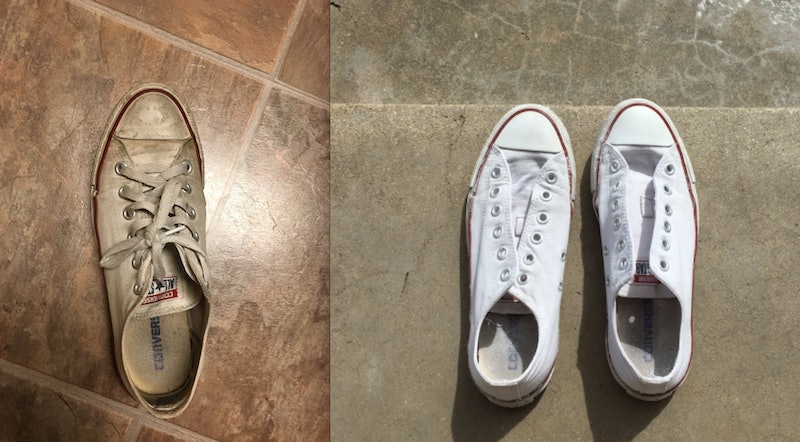 Fall is here, which means it's time to dust off the dirt on those sneakers — literally. If your once-white kicks are a little too dirty after frolicking in the summer sun, you're not alone. But, as Glamour found, one Twitter user has found the perfect way to clean white sneakers — and you probably have everything you need in your pantry already.

White sneakers are always in style. The only problem is that the color isn't always as true as the trend. No matter how careful you are, you're bound to get scuff marks, but now there's a full-proof way to get them clean. All you need is a little baking soda and elbow grease.

According to the tweet, the secret is a 1:1.5 mixture of baking soda and detergent. Just rinse the shoe, scrub on the mixture with a toothbrush, rinse, put in the washer, and use baby powder to dry. It's really that simple. This proof is in the picture.

The viral tweet shows a pair of Converse that are pretty much brown to begin with. After the trick, they turn a brilliant bright white. Halloween Queen's post has over 300,000 likes and 95,000 retweets, with tons of people asking for more in-depth shoe cleaning advice, too. The user even asked her feed how to turn off notifications because the support was so great.

Halloween Queen calls herself a miracle worker in the post, which is not an understatement in the slightest. After you see the post, you will be able to get behind her proclamation.

It's worth noting that there are tons of white sneakers hacks out there that claim to get the job done. People have tried everything from scrubbing with a Mr. Clean Magic Erasers to covering scuffs with white nail polish. But it appears that none seem to be as foolproof as Halloween Queen's tips.

A lot of people say that putting sneakers in the washer is a big no-no, but the Twitter user proves that this myth is a bunch of bull — at least for Converse. According to Sears, you should remove the laces, which Halloween Queen seems to have done, and put them in a pillow case or washer bag.

Her name might be Halloween Queen, but the internet is deeming her the White Shoe Queen. If this isn't the power of social media at work, then I don't know what is.

Just to clarify, this is laundry detergent — not soap!

But really. Twitter teaches us the things we really need to know, like how to wash shoes and which photos make the best memes.

Not as eco-friendly, but I guess it gets the job done. There's always that one person that has to join in the thread...

Here's another tactic for all of you at home DIYers. Apparently, it works just as well, though peroxide could leave your shoes with a yellowish tinge.

PSA: Do not bleach your shoes! Detergent is way safer, at least according to Twitter users.

There's even a clarification of the instructions for those of you not quite up to speed.

Twitter: Helping random strangers with their daily needs since 2006.

The feed is filled with friends tagging friends, too, which is really the beauty of social media.

Bottom line: While you could go out and buy another pair of kicks, this hack is way cheaper and sufficiently simple. There's a good chance that you already have everything you need, so why not give it a try?

Now let's all give Halloween Queen the big round of applause she deserves for saving our shoes, because she's the real MVP of 2017.

More like this
Manifest Your Dream Life With The Viral 'Tinkerbell Effect'
By Meguire Hennes
The “Whisper Method” Is The Latest Manifestation Technique Going Viral
By Meguire Hennes
Are Skater Shoes the Next Y2K Trend to be Revived by Gen Z?
By Lauren Alexis Fisher
What Does POV Mean On TikTok? The Popular Acronym, Explained
By Emma Carey
Get Even More From Bustle — Sign Up For The Newsletter