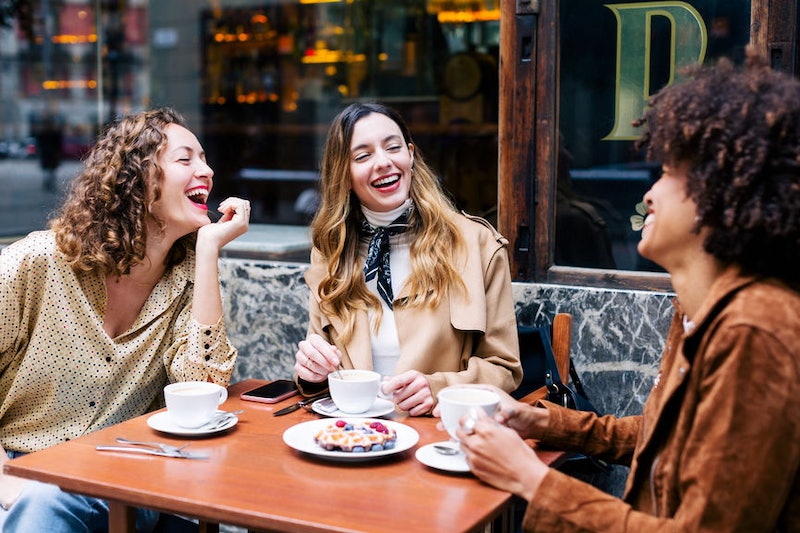 When a friend gave her the silent treatment, Lauren Mechling decided it was time to start talking — and writing — about it. About friendship, that is. It’s a topic, she noticed, that people are ravenously interested in. She wrote about it in the buzz-inducing op-ed "How to End a Friendship" that ran in the New York Times in June. (It's garnered 1,071 comments and counting.) She wrote a novel about it, too: How Could She, which tackles the thorny topic of how we make, keep, and generally negotiate friendship.

I meet Mechling, a contributing editor at Vogue, at a café on a leafy Brooklyn street near her home to discuss the book over iced coffees. She’s dressed casually, in a putty-colored t-shirt, denim skirt, and white Birkenstocks, and her manner is easy and friendly. "I’m in airplane mode," she says, laughing, when I ask if I can take a picture for social media. What she means is, no public face today, please. No pictures. Okay: conversation only.

"It’s such a basic topic," she says of How Could She's main theme. "It’s not like I’m writing about discovering dinosaur fossils. I’m talking about friendship — one of the fundamental relationships we have. But it seems like it’s a topic that a lot of people wanted to read about."

The fact that friendship is critical to our happiness is intuitive, and backed by research. Social psychologist William Chopik’s work at Michigan State University shows that friendships are even more essential than family ties. They become more important the older we get.

Though, as most people who’ve aged out of grade school know, friendships can be difficult to maintain. It’s the maintenance that Mechling was particularly eager to address in her story of three friends who move in and out of closeness as they change jobs, cities, and romantic relationships. There are times when Sunny, Geraldine, and Rachel are willing to have an uncomfortable conversation to preserve the friendship and times when they are not. Just like in real life.

So is it easier to hold onto an old friendship that’s hit a bumpy patch, or to make a new friend? Well, for one thing, it is simply harder to meet people later in life. "I’m no longer a twenty-something working in an office with other exciting twenty-somethings, where we absorb each other’s dust particles 80 hours a week," Mechling says. She does find, though, that friendships continue to take root when we are thrown together, whether by work, family, or neighborhood.

"In the gig economy, we are exposed to interesting people but only on short-term projects," she says. "Or as a mother, I meet other mothers I like when I’m with my kids. But it’s harder as you get older to commit, and to make the time and space. Maybe because you’ve been burned. Or maybe because you know how hard it is. When you’re younger, you’re more trusting and open."

And once you meet someone you like, you have to figure out how to hold on to them. "Preserving a relationship with a friend takes a certain conscientiousness," she says. "In a successful friendship, there’s a sense of checking yourself: Am I being a good enough friend? Am I listening enough? Am I showing up?"

But sometimes, one or both parties may find that the chemistry is just gone. "Friendship isn’t meant to be work," says Mechling. "Work is work, and marriage can be work, but friendship should be a place of play."

When I wonder aloud whether it’s some women’s dislike of conflict that keeps them from having the uncomfortable conversations, and why they may let friendships drift away, she says, "But I feel like the drift can be its own conflict. In a way, the conversation is the softer thing. It’s what could preserve the friendship." It’s when the friends don’t stop the drift that they passively allow the friendship to die.

"Old friends keep us connected to the person we once were," says Mechling. Still, it can be confusing, as people bring their old selves and new selves to the table at the same time.

That threatens to happen in How Could She, a modern comedy of manners that tracks where the loves and careers of the three old friends take them. Rachel and Sunny are in New York, living fabulous-looking lives, while Geraldine is back in Toronto, recovering from a bad breakup and feeling decidedly unfabulous. When she decides to administer a B12 shot to her life and career by moving to New York, the three friends end up in close proximity once again. It’s then that the negotiations and jockeying — two leaving out the third, one keeping a damaging secret, while all three try to manage their own complicated lives — begin in earnest.

In the novel, as in life, professional opportunities, boyfriends, husbands, and kids slip to the front of the priority line. Alliances shift, and the characters — and readers — wonder whether the friendships will survive. Because these are long-standing friendships, the stakes are particularly high. As with wine and antiques, age increases their value.

'How Could She' by Lauren Mechling

"Old friends keep us connected to the person we once were," says Mechling. Still, it can be confusing, as people bring their old selves and new selves to the table at the same time. Integrating those selves while keeping a friendship going strong can be a challenge. But it’s well worth the effort, she says, and she should know. Now, in the midst of her book tour for How Could She, Mechling’s had the great fortune to connect with people from various stages of her life. "They’ll come to a reading, or write to me, and it’s really moving," she says. "There’s something special there. People who you have a past with are priceless."

Not that a shared past alone is enough, though, if a close friend is not holding up their end of the relationship, Mechling says. And if one person is feeling hurt or slighted, it’s not fair to either person to keep going along as if nothing has changed. You don’t have to cut them off entirely, she adds, which is what Mechling writes in her Times op-ed that a friend did, painfully. "If somebody really lets you down but you still think they’re a gas, you don’t have to cut them out of your life," she says. "If that person is not being a good friend, you can lean way back and change the terms of your friendship." Be aware that you can’t depend on them, if that’s the case. She adds: If that person isn’t willing to restructure, only then is it possibly time to rethink the friendship.

The topic is enough to fill up many novels, and many hours of discussion over coffee. Like all things people love and depend on, it’s worth the effort and care. Because, as Mechling knows, beloved friendships require tending so they can continue to delight.

More like this
'Mayfair Witches' Already Changed 2 Major Characters From The Books
By Grace Wehniainen
'That '90s Show' Star Callie Haverda Got Advice From Mila Kunis & Ashton Kutcher
By Brad Witter
Prince Harry Incorrectly Recites Christina Aguilera’s “Genie In A Bottle” Lyrics
By Jake Viswanath
I Read Prince Harry's 'Spare' So You Don’t Have To: 11 Highlights To Know
By Marina Watts
Get Even More From Bustle — Sign Up For The Newsletter
From hair trends to relationship advice, our daily newsletter has everything you need to sound like a person who’s on TikTok, even if you aren’t.