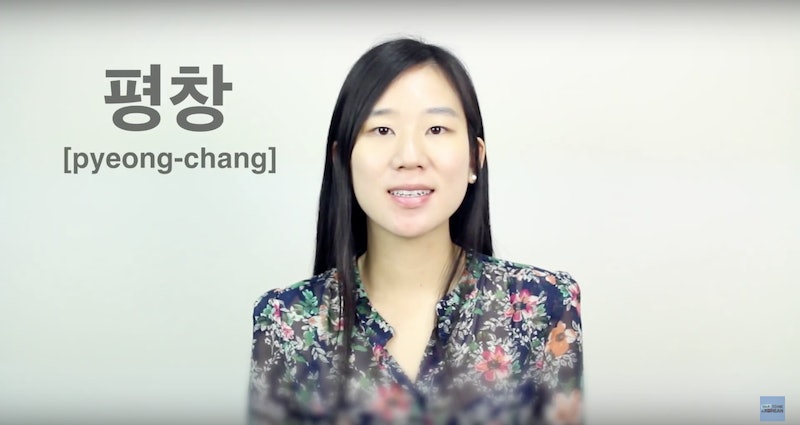 With the Winter Olympics gearing up, it's important to know how to correctly say out loud the name of where they're taking place. In this case, that would be PyeongChang, South Korea, and how you pronounce it is actually pretty simple.

While there is a bit of contention about whether the last syllable should sound more like a short "U" or long "A", expect to hear both on Western media. Generally, the rule is that it's pronounced peeyong-chang, which, helpfully, is almost exactly how it's spelled. The important thing is not to drag out the "peey," but to quickly cut to the second half. If you're having trouble sounding that out, don't worry. There are plenty of video tutorials across the internet that demonstrate proper annunciation.

In the United States especially, westerners have the unfortunate reputation for butchering the names of places (and people, and things...) in non-English languages. This is especially true the further away a language originates. But if you're nervous, that's okay — just practice. It's better to say it a few times out loud to yourself than to go the rest of the month of February avoiding saying the name of a place that everyone is going to be talking about.

PyeongChang, though referred to as the city hosting the 2018 Winter Games, is actually, technically, a South Korean county. It sits less than an hour's drive from the demilitarized zone that separates South Korea from North Korea and is known, above just about all else, for being a resort location.

The county was chosen to host the 2018 Winter Games back in 2011. Organizers have been preparing for the international competitions ever since.

Preparing for the games is no easy task. Reports indicate that South Korea is pouring an estimated $13 billion into the project. Much of the price tag has to do with the cost of building arenas, complexes, and general infrastructure required to house the nearly 3000 athletes and tens of thousands of spectators expected to travel to PyeongChang for the Games (the PyeongChang Olympic Stadium, where the opening and closing ceremonies are taking place, can hold 35,000 people).

But, even though billions are being spent on construction, some of the structures are already scheduled to be torn down after the Winter Games end. The main stadium, which NPR reported cost in the realm of $109 million, is supposedly slated for demolition once it's out of use. While that might sound wasteful at first, the alternative could be that the stadium follows the fate of countless other Olympic complexes: abandonment and decay. Most host cities and countries, it turns out, haven't quite figured out what to do with their sports complexes once athletes pack up and take off.

In any event, PyeongChang should be well-prepared for the competitions. Many athletes poured into the Olympic Village in the days before the Opening Ceremony, and if their photos are any indication, the county (and country) seem to have everything under control. (Rio, if you remember, didn't quite finish building its athlete housing prior to the games starting, and it caused quite a scandal. Olympians posted tons of photos to social media which appeared to show incomplete apartments and accommodations.)

The Winter Games, for reference, officially begin on Feb. 9, which marks the date of the opening ceremony. (Some events, like figure skating and freestyle skiing, actually start competing one day prior.) The games run until Feb. 25. Ceremonies and games will be available for streaming online at NBCOlympics.com. With that and a solid pronunciation video, you should be good to go cheer for your team of choice.