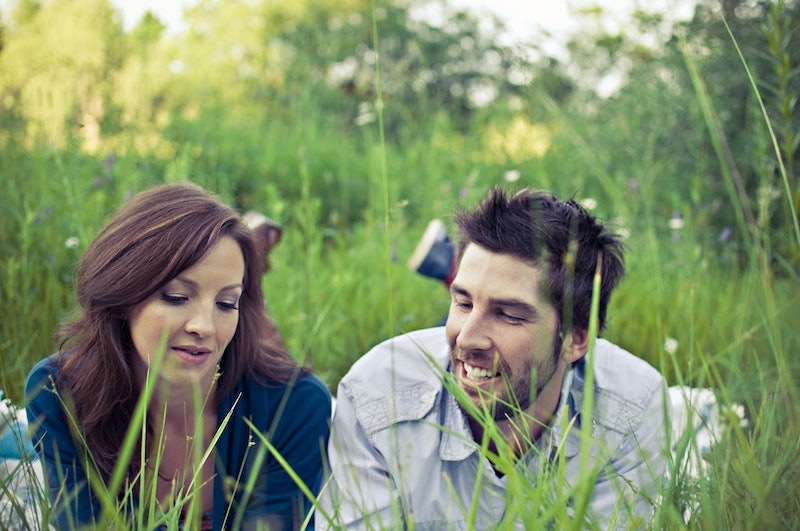 There is a Sex In The City episode where Charlotte says she tried talking to Trey about the sexual problems in their relationship, and it became so uncomfortable that they just played golf instead. The struggle — when you and your partner have stopped having sex and just don't know how to address it — is real. Just how do you talk about lack of sex in a relationship? This is a hard topic to broach with your partner because it makes you vulnerable, and opens you up to the possibility of rejection. "Sexual preferences should be easy to talk about because they ultimately lead to your pleasure, but they’re often difficult to discuss because we fear judgement," Manhattan-based Sexologist Carli Blau told Healthline.

The societal pressure to keep it hot 24/7 can also affect how happy you are with the amount of sex in your relationship because you might be using some perceived, and unrealistic, barometer to gauge how much sex you think should be having. A study in the journal Social Indicators Research found that people who believed they were having less sex than their peers were unhappier than those who believed they were having as much or more than their peers, the University of Colorado, Boulder, reported.

And, at some point every person has likely felt that they are having less sex in their relationship than everyone else. I too have been guilty of this because, well, social media.

However, when I sit down with friends who I thought had the perfect relationship — because of their epic Instagram feeds filled with cute snaps of their boos — they sometimes reveal to me that they haven't had sex in weeks, months, or even a year.

This is actually a pretty common phenomenon, and doesn't mean the end of things for your relationship. The right amount of sex is different for every couple, according to Megan Fleming, Ph.D., sex and relationship expert, who told Self, "It doesn’t matter what’s normal for anyone else, it's about whats normal for you," Fleming explained. However, if you're not happy with the amount of sex in your relationship, instead of playing golf like Charlotte and Trey, you're going to have to talk about it so you don't end up like Charlotte, who became so frustrated that she ended up making out with the gardener.

"Keeping communication channels open helps you create a relationship vision," Fleming told Self. If you want to bring sexy back to your relationship, try these tips for navigating a healthy dialogue.

Start The Conversation From A Place Of Curiosity

OK, I think it's safe to say that there is no fictional couple in the history of television with worse communication skills than Luke and Lorelai on Gilmore Girls. These two were so bad at saying what was on their minds that it took them four seasons to kiss. Their inability to talk to each other about pretty much anything led Lorelai to sleep with Christopher, and once they finally got back together, it took another decade for them to fully commit to each other.

While starting a difficult conversation is incredibly challenging, don't be like Luke and Lorelai and mire yourself in years of misunderstandings and hurt feelings. However, how you approach the subject is key, experts say. Instead of opening up the dialogue on the defensive, consider doing it from a place of curiosity like this: "I’m curious why we’re not having as much sex as we used to," California-based Psychologist and Certified Sex Therapist Holly Richmond, Ph.D. told Health, instead of, "I hate that we don’t have sex anymore. What’s going on with you?" A non-confrontational way to broach the subject would be, "It's like we're dancing to a different beat. What can we do to get in the same groove?"

Additionally, Healthline wrote that experts have even outlined times and places that are not ideal for a sex conversation. For example, don't ambush your partner as soon as they walk in the door, when their hungry or tired, or right before bed. It's also probably not a good idea to have the conversation someplace public, like a restaurant or bar. What's more is that using "I-statements" helps emphasize your experience, without shaming, blaming, or complaining about your partner.

Take The Time To Really Listen To Each Other

In general, many people aren't great active listeners, which means that instead of thinking of your response while your partner is talking you're open to really hearing what they have to say, and your fully process it before you respond. While you don't want to automatically assume the problem is physical or psychological, you do need to rule that out Elly Prior, relationship therapist and founder of ProfessionalCounselling.com, wrote on her blog. Examples include depression, anxiety, low sex drive, trauma, physical pain during sex, and more.

Additionally, Prior noted that what eventually results in lack of sex is often connected to a larger problem in the relationship. After all, Lorelai didn't end up sleeping with Christopher because she and Luke had one fight. She did it after they hadn't had an honest conversation in months. Because she felt hurt and rejected, she started a screaming match and dumped almost a year's worth of pent up frustration on Luke. The she ran away before he was able to fully process what she said and appropriately respond. See how this type of communication can lead to disaster? If you're having problems in other areas of your relationship, Prior wrote that an overall communication breakdown can also have dramatic effects on your sex life.

So, if your partner says that they don't feel like being sexual because of a non-sexual relationship issue, like they feel you're not making time for them or not supporting them emotionally, you're going to have to work together on that issue first. Prior also wrote that getting overly fixated on the lack of sex means that you could be missing the real problem altogether.

Create A Plan Together That You're Both Comfortable With

Once you've started the conversation, and agreed that you both want to continue to be in the relationship, create a plan together to address your problems — both sexual and non-sexual. Lack of communication and misunderstandings can cause a lot of unnecessary arguments and hurt feelings. If this is a big issue for you and your partner, and you feel like you keep getting stuck in the same cycle of behavior, it might be worth it to go to couple's counseling.

This can provide you both with an objective lens into how you can improve the communication in your relationship, and it's a safe space to start a difficult dialogue. Prior also suggested going to counseling if the relationship seems fine aside from the lack of sex, and the two of you are unable to pinpoint an exact reason for your lack of sexual intimacy.

She also cited ways to increase physical intimacy that don't involve sex, but could get you and your partner physically closer and in turn increase your desire for each other. Ways to physically engage with your partner include: any kind of loving touch, stroking and massaging, kissing — "just a kiss of a few seconds when you leave and when you're back home can make all the difference," she noted, cuddling, holding, and embracing.

"I'd really encourage you to invest in being 'physical' in this way and become skillful at it, particularly if it's not part of your experience now," Prior advised. "And when you're ready to start healing your sexless marriage or relationship, you'll find foreplay so much more enjoyable."