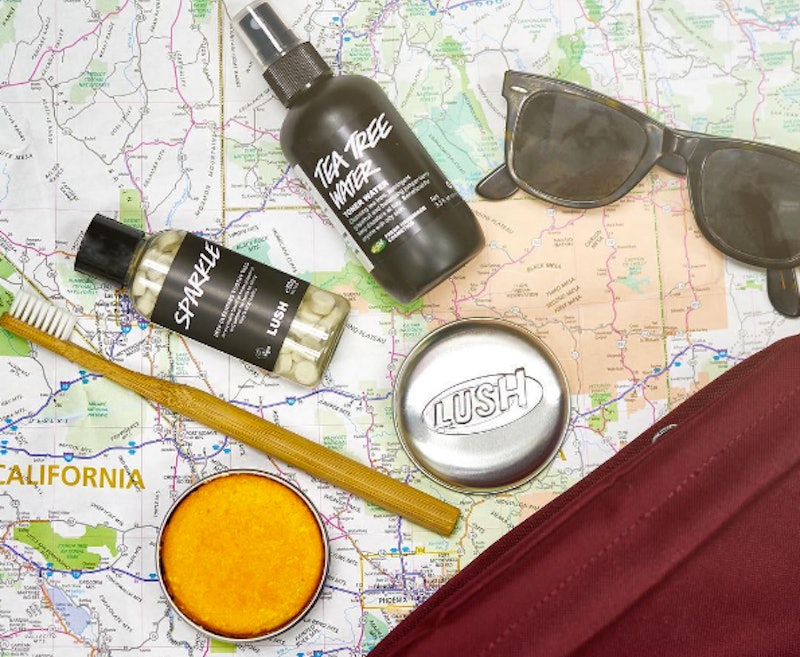 Once and a while a beauty launch will come around and make you ask, "wait, what?" That's exactly what you'll do when you read this next sentence: Lush Cosmetics has made a solid mouthwash. Yes, you read that right. How do you use them, you ask? You'll want to make sure you know how to use this new product before you pop one into your mouth for some fresh breath.

Lush comes up with some of the most innovative beauty products on the market. That also means that sometimes it's hard to figure out of to use them — remember when people reported that they had turned pink from misusing a shower oil by the brand? Once I actually popped one of their Toothy Tabs in my mouth thinking it was a mint. So I'm hear to break down the Mouthwash Tab how-to for you, before the big Mar. 1 release date that Teen Vogue is reporting.

According to the Lush UK site, which already launched the new items and is currently sold out of them, using it is pretty easy. All you do is place one in your mouth, add a sip of water, chew a few times, gargle, and spit. While, according to the site, it is an all-natural product, you still shouldn't swallow the mouthwash.

The Mouthwash Tabs will come in three different flavors. There's the minty Crème De Menth, lemony Pan Galactic Gargle Blaster, and the green tea and sea salt Ugai. According to the website, the aim was to make mouthwash fun again with the flavors, and it sounds like they have succeeded.

"This planet has - or rather had - a problem, which was this: most of the mouthwashes on it were rather boring, and had been for rather a long time," the UK Lush site says. "There was a largely unexplored space to fill, and the only way to fill it was to seek inspiration from the wider, largely unexplored, space around Earth itself."

This isn't the first time the brand has revamped a traditional oral care item either. They created Toothy Tabs, mentioned above, which are toothpaste capsules. Fans are catching wind of the new launch and are loving it already. Because something so innovative is only meant to be celebrated. Here's what people have to say about the new items.

It really is pretty darn handy. Especially for travel.

Mouthwash Bombs is a new way to think of them, I guess.

Needless to say, people are pretty excited to get their hands on this new mouthwash formula.