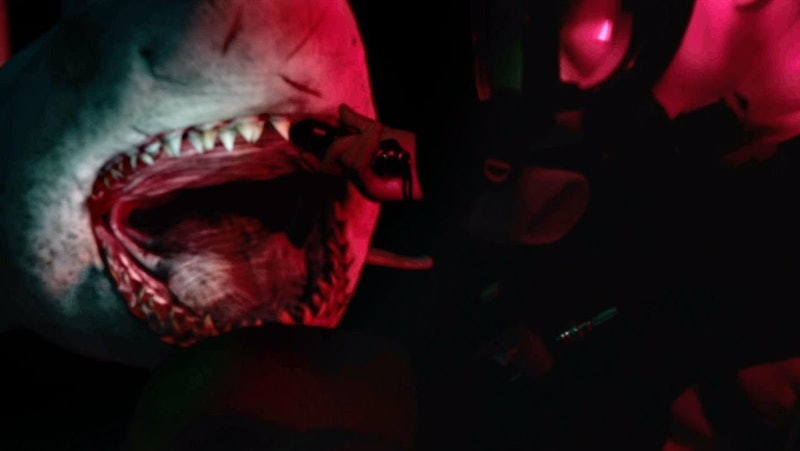 The summer of 2017 saw the sisters-in-shark-peril film 47 Meters Down, starring Mandy Moore and Claire Holt, churn box office waters to become the indie success of the summer. With a sequel coming out soon that's set in an entirely different country and with neither of the original stars returning, how does 47 Meters Down: Uncaged connect to the original? The new film, out Aug. 16, aims to amplify the original at every turn, featuring double the sisterly strife and amping up the shark action.

There's no direct plot connection between the first and second film, save that the sharks are the same species and back in action. But the scary spirit of the first, with young women fighting for their lives against rapidly lowering oxygen levels and super predators surrounding them, is doubly present. 47 Meters Down: Uncaged promises more of the same thrills, but with underwater claustrophobia replacing the agoraphobic terror of the open sea.

The sequel features scared step-sisters Sasha (Corrine Fox) and Mia (Sophie Neilisse), plus adrenaline-junkie besties Nicole (Sistine Rose Stallone) and Alexa (Brianne Tju), heading out to explore a flooded Mayan city. Unlike the first film, all four girls have experience scuba diving. Also unlike the first film, where the sisters were intentionally going on a shark dive, the sharks in Uncaged are an unwelcome and unexpected surprise.

So what links the two films together? For one thing, the original film's director and writers are back for another round of shark-infused terror. Immediately following the unexpected box-office success of 47 Meters Down, a movie that originally was intended for straight to video release, director and co-writer Johannes Roberts and his co-writer Ernest Riera got the green light to pen a sequel.

"I started with the idea of the girls in the caves, but I didn’t have the emotional content," Roberts says in the notes of beginning to write the follow-up. His and Riera's solution? "Mean Girls, but with sharks!" Roberts explains. "It has a teen vibe. You have two step-sisters who don’t like each other, and one is bullied, and it resolves itself throughout the movie to a really cool ending that turns it all on its head."

The film echoes the original, but intentionally ups the action. Producer Mark Lane (also back for a second shark attack) says in the notes, "Audiences can expect a lot of the spirit of the first film, but everything’s dialed up to 11...The first film was a calculated two-hander in a barren location. It was deliberately stripped back to allow us to make it on a budget. This one? Well, there’s a reason the film’s called Uncaged! The gloves are off."

If you can handle the sheer terror of multiple mega-predators in such close proximity with soft and panicky flesh, it sounds like 47 Meters Down: Uncaged is like chum in the water for you. For those of us with several phobias checked off by this aggro-sequel, seeing it in theaters may be the closest we'll get to the water this summer.

More like this
These 25 International Horror Movies On Netflix Prove Fear Is A Universal Language
By Bustle Editors
26 Ghost Story Podcasts To Get You Ready For Halloween
By Jessica Booth, Mia Mercado, JR Thorpe and Emma Carey
Lindsay Lohan & Jonathan Bennett Celebrated Mean Girls Day Very Differently
By Jake Viswanath
Christian Bale Sang With Taylor Swift & His Daughter Can't Believe It
By Radhika Menon
Get Even More From Bustle — Sign Up For The Newsletter