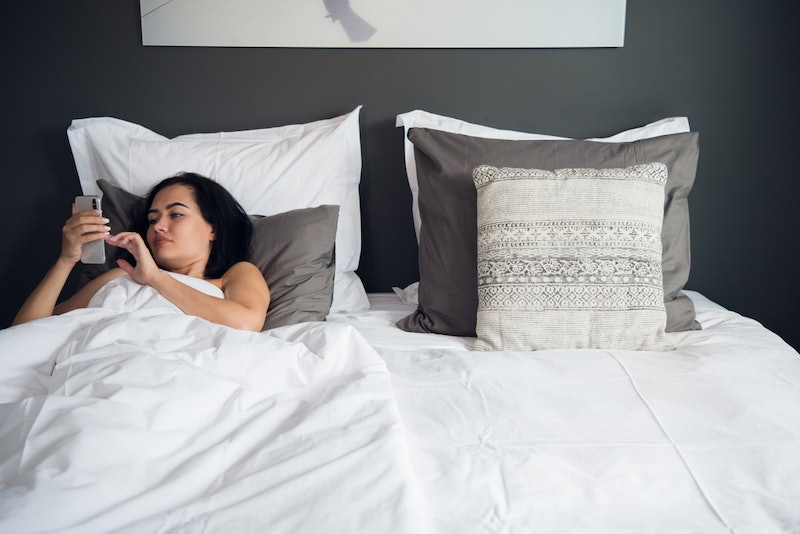 All the advice on how to get better sleep tells you not to use electronic devices before bed. You’ve heard it before; they say the blue light messes with your circadian rhythm, so you’ll sleep better if you put down the smartphone or turn off the TV at some point before you try to go to sleep. But no one tells you exactly why screen time disrupts sleep. Well, now researchers have published a study in Cell Reports that explains exactly how cell phone blue light messes with your sleep.

"Compared to other light-sensing cells in the eye, melanopsin cells respond as long as the light lasts, or even a few seconds longer," Ludovic Mure, staff scientist and first author of the paper, said in a news release. "That's critical, because our circadian clocks are designed to respond only to prolonged illumination."

But researchers also found that a second protein called arrestins, which were once thought to stop the eye’s response to light, actually kept the melanopsin sensitive to light, according to the news release. When the melanopsin and arrestins work together, says the news release, the eye seems to continuously respond to light. "Our study suggests the two arrestins accomplish regeneration of melanopsin in a peculiar way," Satchin Panda, senior author of the study, said in the news release. "One arrestin does its conventional job of arresting the response, and the other helps the melanopsin protein reload its retinal light-sensing co-factor. When these two steps are done in quick succession, the cell appears to respond continuously to light."

But there are ways to protect yourself from blue light at night, says Harvard Health, such as avoiding bright screens a few hours before bed, switching to LED or compact fluorescent lightbulbs, and exposing yourself to lots of bright light during the day. If you work the night shift, Harvard Health recommends wearing blue light-blocking glasses.

The researchers say they hope these findings lead to new treatments for migraines, insomnia, jet lag, and even circadian rhythm disorders. Now that you know exactly how blue light effects your sleep cycle, you can figure out the best way to adjust your bedtime routine so you get the best sleep you can.