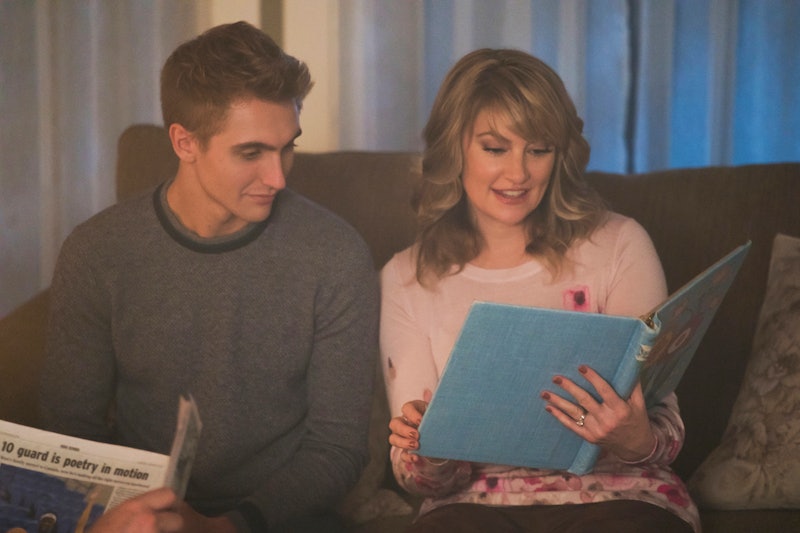 Betty and Alice may think they're doing the right thing by taking Chic in on Riverdale, but Hal Cooper has a point — they've had nothing but trouble since the prodigal sun returned. Betty's dipping deeper into her own dark side, and now there's yet another dead body to deal with. It seems like this dead guy knows Chic on Riverdale, but their exact connection is unclear.

This dead guy barely knocked on Alice's door before he was on the ground, in a puddle of his own blood. From what we saw, he looked almost like an older, messier version of Chic — bleach-blonde, rat-faced, skinny, and just sketchy enough to cause instant concern. This also isn't the first time that we've seen men go after Chic on the show. When Betty came to visit her newfound brother a second time, he was getting pummeled by what looked like his landlord.

The only person we've seen be nice to him outside of his own family is Ben, who works at the Bijou movie theater in concessions — who also visited the house that day and also happens to be the student that Miss Grundy was macking on just before she died. Honestly, more people should be talking about Ben. He's like the teenage version of Bob Benson from Mad Men, plus murder. Do you smell a conspiracy, yet? It might all hinge on who this mysterious man is and why he ended up dead by Alice and/or Chic's hands. Here are some possibilities.

He's One Of Chic's Clients

When he was giving Betty cam tutorials, Chic warned his sister against letting anyone on the other side of the chat be able to find her home address. Betty, who has been stalked very recently, totally gets that.

So the most likely scenario is that this is someone whose fantasies Chic fulfilled on the internet, and somehow found a way to him in the real world. Did Betty let something slip? Did they somehow find Chic's abandoned room? He got the Cooper home address from the Sisters, after all. If someone found Chic, they could easily find the whole family.

That's a bit of a basic assumption, as vengeful dealers are pretty cliché, but Riverdale still hasn't resolved the "jingle jangle" plot line this season. Maybe this greasy random is connected to that epidemic.

The way Hal is acting around this boy is beyond odd. Kind of makes you think that he isn't Chic's father, doesn't it? If the dead guy is Chic's old man, it's a shame that we never got to know him — but it would also explain why Alice doesn't want him around. Or, maybe this guy is a father figure instead, like one of Chic's mentors, or a foster parent who didn't stick. We know so little about Chic's upbringing.

In an interview with TV Guide, actor Hart Denton, talked about how much nurture plays into Chic's character. Betty's darkness may come from within, but Chic's comes from his circumstances.

"If you saw the way he was brought up," Denton said, "I think you'd see a totally different Chic. I think it's that way with anyone in the world, if you take that same person and put them in a different environment of raising them then you get someone totally opposite."

He's also calculated, according to the actor. "Chic is very smart," Denton said. "He plays around with people in the sense of not revealing too much of himself. That's out of fear for how he was raised, but I think Chic knows every move he makes."

How was he raised, apart from the Sisters of Quiet Mercy? Who are these people that pop in and out of his life, and why did one end up dead just like that? Riverdale has so many questions to answer about this character, and the dead body is just the frosted tip of the iceberg.