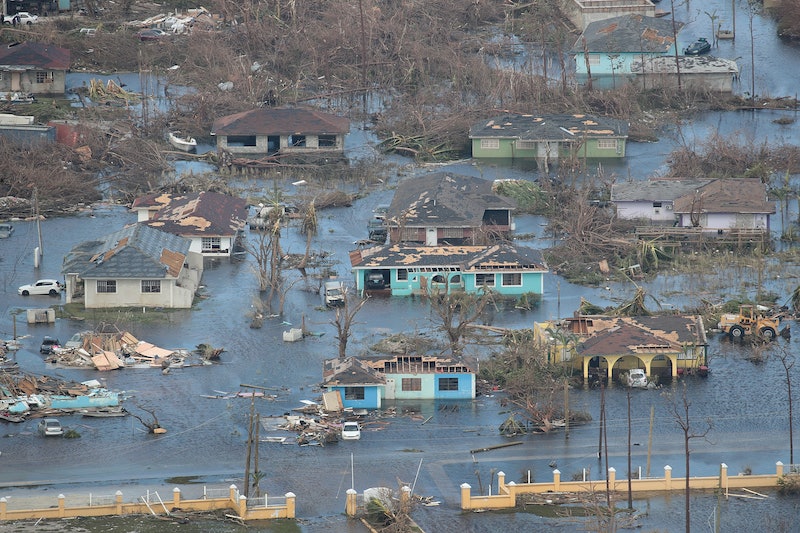 Hurricane Dorian has already caused devastating damage in the Bahamas, and the storm stands to potentially impact more people in its path. As these natural disasters begin to feel more frequent, it might come as no surprise that climate change can affect hurricanes like Dorian. But that's just the beginning of the story. According to scientists, research on the topic suggests climate change could make already dangerous storms even more threatening.

As the Washington Post reported, global warming makes oceans hotter, with data from the National Oceanic and Atmospheric Administration revealing that oceans have absorbed more than 90% of Earth's warming over the last 50 years. Dr. Sean Birkel, Ph.D., a Research Assistant Professor at the Climate Change Institute and the School of Earth and Climate Sciences at the University of Maine, tells Bustle that warmer oceans and hurricane behavior are intrinsically linked. "Climate change includes significant warming of the world's oceans. Warm surface waters provide the heat and moisture that fuels hurricanes," Birkel says to Bustle. "Therefore, we expect to see more frequent and intense hurricanes in the future as the globe continues to warm."

Dr. Jill Trepanier, Ph.D., an associate professor in the Department of Geography and Anthropology at Louisiana State University, builds upon that point, telling Bustle that increased atmospheric heat means there's a connection between hurricanes and climate change.

A hurricane's role in the atmosphere is " ... to transport heat. More heat means more transport necessary. This will either lead to more storms, or more intense storms, or both," Trepanier says to Bustle. "In the case of Hurricane Dorian, we saw an immense amount of energy available in the atmosphere. That energy is partially due to the summer months (hence, hurricane season), and some due, in part, to a changing climate."

Dr. Dennis Hartmann, Ph.D., a professor in the Department of Atmospheric Sciences at the University of Washington, agrees that evidence suggests hurricanes are getting stronger due to global warming, but cautions that Dorian still could've happened if global warming wasn't a factor. "The laws of physics suggest that hurricanes will become stronger as the Earth warms, and this conclusion has been supported with modeling studies," Hartmann says to Bustle. " ... It is therefore likely that global warming had some effect on Dorian, but it is also true that a hurricane like Dorian could have happened without global warming ..."

Still, Hurricane Dorian revealed some of the specific ways storms can change as the Earth continues to warm. As The Guardian pointed out, for example, Dorian transitioned from a Category 2 into a Category 5 storm incredibly quickly. In other words, it went through a process called rapid intensification. According to the paper, recent research has found that global warming makes rapid intensification much more likely. Ultimately, rapid intensification means hurricanes are less predictable — and potentially more dangerous, Wired reported.

While it may be causing hurricanes' intensity to shift quickly, climate change could also make hurricanes move more slowly overall. That means they can stall over locations for longer, like Dorian did over the Bahamas, The Guardian noted. "Recent studies suggest that the forward speeds of Atlantic hurricanes have slowed overall in recent decades," Birkel tells Bustle. " ... One major consequence of slower-moving or stalled tropical cyclones is the potential for very extreme rainfall amounts," he adds. While The Guardian reported that there's not yet definitive research linking hurricanes' forward speed to climate change, researchers are increasingly theorizing that shifting jet streams (air currents) resulting from climate change are contributing to more hurricane stalling.

Overall, it's pretty clear that hurricanes are impacted by climate change — and that Dorian is just the latest example in a trend of increasingly intense storms. "I do not like to attribute only one storm to a changing climate. However, the last few years we experienced Irma, Harvey, Maria, Michael, Florence, and, now, Dorian," Dr. Trepanier explains to Bustle. " ... When we begin to see these kind of events seasonally, we can say that hurricane climate is changing in response to our global changing climate."